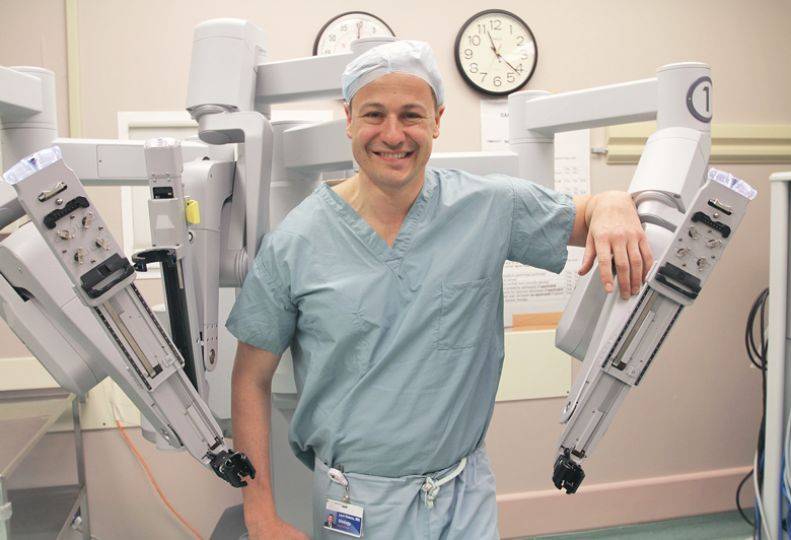 With offices on the lower South Hill and North Spokane, urologists at Spokane Urology are blowing away the national average for using robotics technology to remove tumors and cancerous portions from kidneys, claims one of the practice’s six managing partners.

Dr. Levi Deters says being able to allow patients to continue having the function of both kidneys more effectively contributes to their overall long-term health.

The most common method for treating kidney cancer is to remove the affected kidney. However, at Spokane Urology, doctors perform what’s called a robotic-assisted, laparoscopic, partial nephrectomy on 65 percent of its patients with kidney cancer. By comparison, the nationwide average for such a surgery is just 20 percent, says Deters, citing a 2013 Journal of Urology report.

Instead of having to make the foot-long incision in a patient that’s required to remove a kidney, a laparoscopic surgery requires only a one- to two-inch incision, Deters says.

The doctor has a three-dimensional view of the patient’s interior while sitting at a console five feet away from the patient and manipulates the robot’s arms from there.

“Urologists have long suffered c-spine and other back injuries from years of surgery standing over patients,” Deters says. “The laparoscope is less invasive to the patient, and better on the health of the doctor who now has a better view of the kidney and can sit down to manipulate the robot. The robot has dexterity and a range of motion similar to your hands.”

“If you have only one kidney and have other health problems such as diabetes, then you’re looking at dialysis for the rest of your life,” he says.

Kidney cancer rates in the U.S. continue to rise, with nearly 65,000 new cases diagnosed each year. The fivefold increase since the 1970s is largely due to the modern use of imaging, says the American Cancer Society.

More than 70 percent of renal tumors are now detected and are at sizes as small as less than four centimeters in diameter. In the U.S. today, roughly 120,000 people are awaiting a kidney transplant, says the cancer society.

Almost 300 people in Spokane County are on a waiting list for a new kidney, Deters says.

In addition to its six managing partners, the medical group employs a staff of 39, consisting of medical assistants, billing specialists, and reception staff, Deters says.

In 2016, Deters says, he performed 500 hospital surgeries and 1,500 office-based surgeries at the medical group’s two locations.

Sacred Heart and Deaconess, however, are the only two hospitals in the region that have robotic laparoscope machines, which range in cost from $1 million to $1.5 million, he says.

“Saving a kidney not only benefits the patient and doctor, but it’s also cost effective to society. Dialysis is about $500 per treatment and can cost up to $70,000 a year for a single individual, and that cost is taken on by Medicare,” Deters says.

However, he says the high cost of the robotic laparoscope doesn’t make it financially viable for every hospital or community.

“The estimate is that it takes at least 80 surgeries per year for it to be cost effective,” Deters says.

Deters gives high praise to his fellow partners and staff at Spokane Urology for being early adapters in using the technology.

“Spokane Urology was instrumental in bringing the kidney transplant to Spokane. Dr. (Roger) Fincher performed the first one here in 1981,” Deters says. “Now, across the country, robotics is the talk of the industry, and we’ve had this ability for at least a decade.”

Patients who have had partial nephrectomies with the laparoscope experience shorter hospital stays, have less post-operative pain, and recover quicker than people who’ve had kidneys removed, says the World Journal of Surgical Oncology.

Of all medical specialists, Deters claims urologists are among the fewest in number in the country. He says urologic procedures and surgeries are challenging to perform.

“It’s kind of like operating in a tight cave,” Deters says of urologic procedures. “Doctors have limited visibility on their patients and don’t have much room to spare in the pelvis.”

It’s why, he says, the use of robotics gives doctors an advantage performing surgeries and procedures.

“There are only 10 urologists in Spokane. We’re an extremely intimate group. There are barely 200 institutions—colleges and universities—that offer training in this field,” he says.

“Once you enter it, you may not know everybody, but you’ve heard their name at some point, either through their published work or a mutual colleague,” Deters says.