Issue is further complicated by slow approval process at state level, according to building group reps 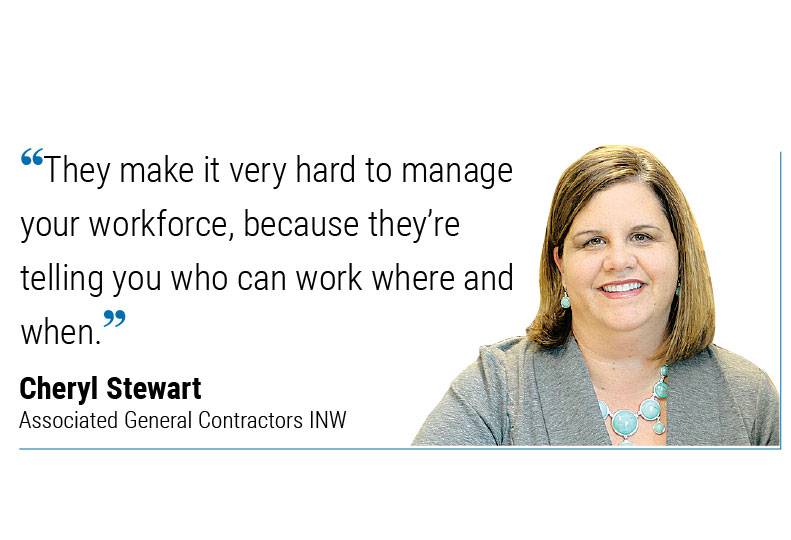 New standards recently approved by the Spokane City Council meant to increase the use of apprentices will make it difficult for many contractors already dealing with labor shortages to participate in city projects, construction trade association representatives here say.

The requirements also could be too punitive for those who aren’t in full compliance, even if they make a good faith effort to meet them, they add.

It’s been five years since the city of Spokane last made changes to its Public Works Apprentice Program. The city’s apprentice program previously had a requirement for contractors to have 15% of the total hours on most large projects—those with more than 160 hours of work and an estimated cost of $600,000 or more—to be performed by apprentices from a state-approved apprenticeship program.

Now, the city is taking the 15% requirement one step further by applying it to each trade on a public works project, in addition to 15% apprentice utilization for the overall job, says Cheryl Stewart, executive director at Associated General Contractors of America Inland Northwest chapter.

According to the ordinance approved by the City Council on Dec. 6, the intent of the changes are for the city to provide training and experience to those seeking to advance or enter into the construction industry workforce.

Spokane City Council President Breean Beggs says the changes were needed immediately to help improve the construction workforce outlook in all trades in the coming years.

“We started to hear that the 15% utilization wasn’t being used across the various crafts. It was mostly being concentrated in laborers,” he says.

According to Beggs, apprentices in the ironworkers, carpenters, and heavy-equipment operator trades weren’t being used, which is why the per-craft requirement was added.

“The goal is, if we’re spending public money on construction, that we get a better bang for our buck and get the next generation of construction trades workforce shored up. We have a huge shortage of construction workers, and the existing workers are aging out and retiring. If we don’t take care of that, the cost of construction will go up for everybody, including the private sector.”

Stewart contends, however, “While it sounds like a nice idea, the administration of (the per-craft requirement) is going to be incredibly challenging.”

The apprenticeship utilization requirements also apply to subcontractors performing public works construction for the city valued at $100,000 or more, as long as there’s a state-approved apprenticeship training program for the trade of the subcontractor involved.

Stewart says AGC worked closely with the city in an attempt to make any new changes workable, “and I think what passed was much better than the original draft the city put out.”

Suzanne Schmidt, president and CEO of Associated Builders & Contractors Inland Pacific Chapter, says most builders were able to meet the previous condition for apprentice utilization for the entire project. Now, however, specialty trades, including ironworkers, roofers, painters, electricians, truck drivers, and laborers, would each need 15% of their workforce to be apprentices on a public works project.

Schmidt has been vocal in opposition to the per-craft requirements and the escalating penalties for builders who don’t meet them. She contends the per-trade requirement will put more pressure on an already strained workforce.

Stewart supports creating more work opportunities for apprentices in every trade, but she says she disagrees with the penalties applied to contractors who try but fail to meet the apprentice utilization requirements.

City staff will monitor and enforce the program and will determine if good-faith efforts have been made by contracting companies to meet the 15% apprentice requirement, or to impose penalties on those companies that don’t meet the goal.

Contractors who don’t meet the 15% requirement and fail to demonstrate a good-faith effort can face a fine of 30% of the highest-paid craft hourly rate for each unmet labor hour.

A second violation will double the fine, to 60%; and a third penalty will be 90%.

Both Stewart and Schmidt say the per-trade requirement is too burdensome for builders to manage their workforce.

Stewart says, “Sometimes, contractors don’t know they weren’t able to meet their goals until six months after, when they go back and review the total hours, because there’s no real-time reporting from the city.”

Stewart says the ordinance change could deter companies from applying to work on those projects altogether, especially if the company knows it can’t meet the per-craft requirement.

There are so few apprentices currently that builders will have to move apprentices around between construction projects to make sure they meet the requirement at each specific job site, Stewart asserts.

There are also a limited number of apprenticeship programs and training agents available for the apprentices to learn on the job, Stewart claims.

Both Stewart and Schmidt agree that the Washington state Apprenticeship and Training Council could help the apprentice shortage by approving apprenticeship programs more quickly. Currently, the council may take a couple years to approve an apprentice program, even if standards for the program have already been approved for a different employer.

Stewart says the AGC previously has submitted an apprentice program for laborers to both the Idaho Department of Labor and the Washington state Apprenticeship and Training Council. In Washington, it took “about two years and hundreds of thousands of dollars to get through the approval process.” The Idaho agency, however, approved the program in about three weeks.

“There are so many barriers, most people give up before they’re ever accepted into a program,” Schmidt says.

Meanwhile, Stewart says skilled employees are retiring or leaving the industry faster than apprentices learn the skills to replace them. She says contractors need skilled workers as well as apprentices.

“We haven’t done a good enough job over the years in getting those people trained up to where they need to be and we’re just so far behind, we’re digging a bigger hole for ourselves because we don’t have the skill level that we need,” Stewart says.

The apprenticeship utilization requirements for each trade “do not help in reaching our workforce goals and that’s our biggest concern with them,” Stewart says. “(The new requirements) make it very hard to manage your workforce, because they’re telling you who can work where and when.”