Current venue might be demolished by fall, though alternative emerges 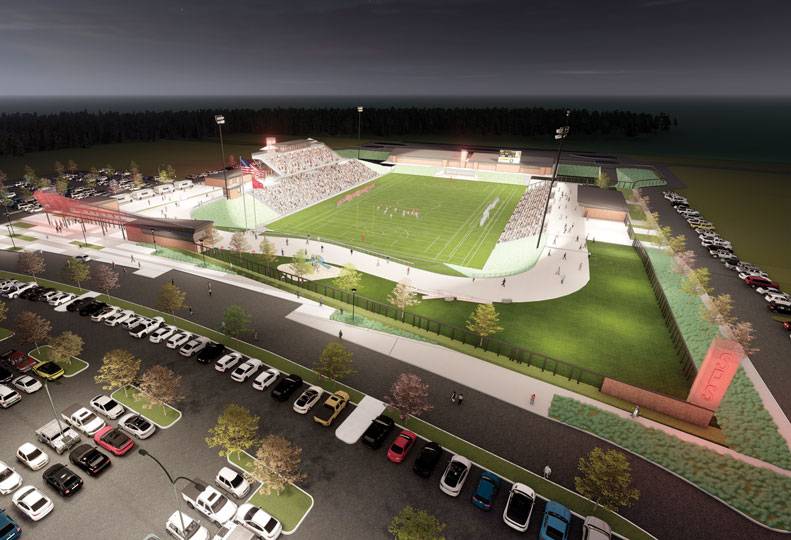 -ALSC Architects PS
A new Joe Albi Stadium would be about a fifth of the capacity of the current structure and would be located on the same site in northwest Spokane, unless plans for an alternative project on Spokane’s North Bank comes to fruition.

The Joe Albi Stadium replacement project is in the planning stages and is on track to be completed by fall 2022, says Greg Forsyth, director of capital projects for Spokane Public Schools.

Another alternative for replacing the aging stadium recently has resurfaced, with the Downtown Spokane Partnership and other proponents championing a site near the Spokane Veterans Memorial Arena, in Spokane’s North Bank neighborhood, for a 5,000-seat venue. At press time, however, the SPS school board hadn’t addressed the new proposal.

Construction permits were issued in late January for the $35 million Albi stadium project, located at 4830 W. Wellesley, in northwest Spokane. Forsyth says drawings and specifications for the structure were completed recently.

Forsyth says construction on the structure will commence this summer.

The stadium plans include a 17,600-square-foot locker room area, a concessions area, a playground for children, a food truck zone, grass seating, and a selfie platform.

Forsyth says the stadium was built in 1953 to host much larger events than the venue has hosted in the past few decades.

“Washington State University played home games here up until the ‘70s. In the last 30 years, it hasn’t been used for any (sporting) events like that,” Forsyth says. “We did research, and a 5,000- to 6,000-seat stadium is the right size for us. Even if it were to be used for semiprofessional sports, it seems to be the acceptable size.”

The stadium replacement was funded through a bond passed in 2018. Also, in a 2018 city of Spokane advisory ballot measure, voters favored keeping the stadium in northwest Spokane over a project closer to downtown.

However, proponents of the Albi alternative recently have urged the school district to contribute $31 million in construction funds toward building a new, 5,000-seat football, soccer, and events facility just north of downtown Spokane.

DSP President Mark Richard says the district could save millions of dollars in maintenance and operational costs if it forgoes rebuilding Joe Albi Stadium in favor of the new proposal.