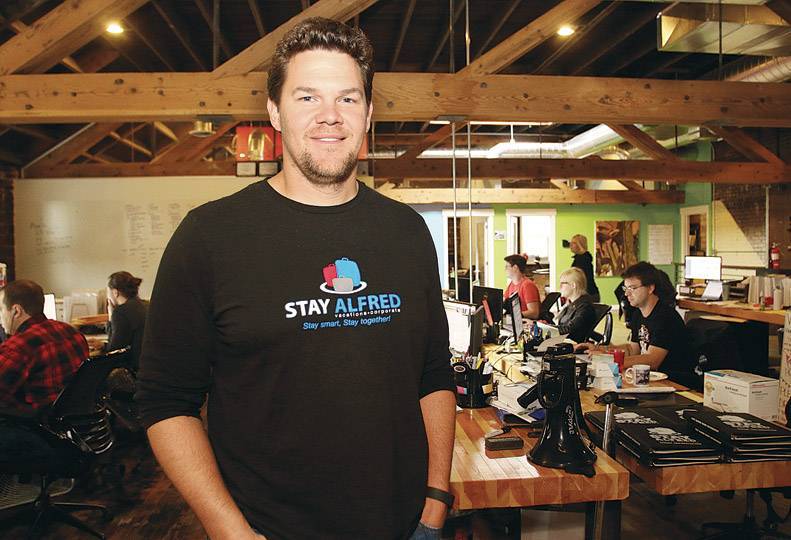 “My heart’s broken in a lot of ways,” Allen told the Journal in a videoconference interview on Wednesday, May 20.

The only thing that exceeds the 8-year-old company’s meteoric rise is its precipitous fall. As recently as early March, Allen and his leadership team were meeting with investors in attempts to secure a round of funding that would have generated up to $30 million, he says.

Earlier this month, a Stay Alfred spokeswoman told the Journal the company planned to continue operating but would do so with a reduced staff and smaller national footprint of units. The company had targeted Aug. 1 as the date travelers could begin booking with the company again.

“We were trying to sell off assets, but there just aren’t a lot of buyers out there,” he says.

Stay Alfred managed vacation rental properties for owners in exchange for a commission fee. The company used a variety of websites to advertise the rentals.

Allen, who served in the U.S. Army from 2005 to 2012, told the Journal in 2015 that while on two weeks’ leave from serving in Afghanistan, he searched for lodging in downtown Denver during a visit to watch the Colorado Rockies baseball team. He found a condominium to accommodate friends and family just blocks from Coors Field. The experience kickstarted the idea to start a short-term rental company.

In retrospect, Allen says, the rental aspect exposed a “fundamental crack” in the business model.

“If we were doing this again, we would’ve looked to have owned more buildings,” he says. “But renting became the business model.”

Like many hospitality companies, Stay Alfred stopped renting properties once COVID-19 reached U.S. shores. Before issuing furloughs, the company had a total of 221 employees, with 146 based here. The company is headquartered at 2818 N. Sullivan in Spokane Valley, in part of the former Itron Inc. headquarters building.

Now, the company is currently left with roughly 50 employees—being paid with the help of Paycheck Protection Program funds—who are helping Allen to wind down the company.

Part of that effort, he says, is continuing to help customers who previously booked trips with Stay Alfred to find other companies who can help honor those existing reservations.

“Some of them have been with us since inception,” Allen says.

He says he’s moved from anger to denial to acceptance of Stay Alfred’s fate.

“We built an absolutely incredible team, and we wouldn’t have experienced the growth we did without having amazingly talented people in place,” he says.