Project envisioned near its other properties in the Gonzaga neighborhood 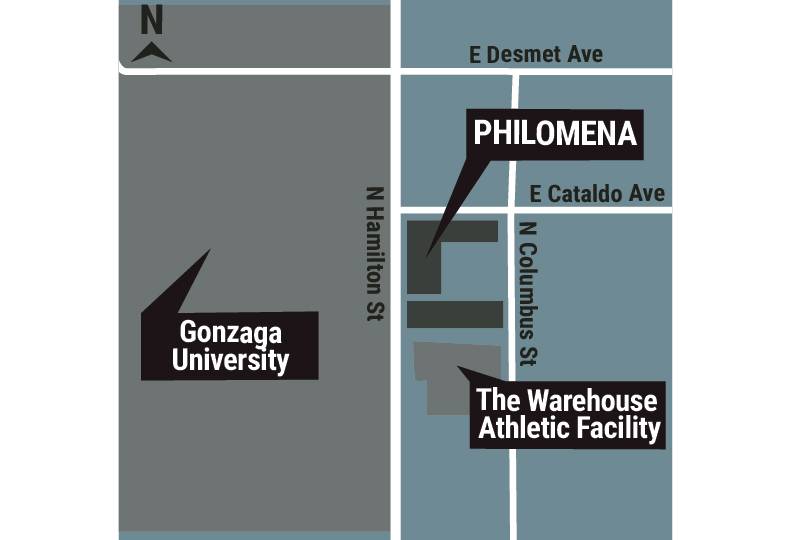 Spokane-based development company Philomena LLC, which is led by Spokane native and basketball legend John Stockton, is planning a mixed-use facility at the site of the former state emissions testing facility at 920 N. Hamilton, just east of the Gonzaga campus.

Stockton and his oldest son, Houston, are heading up the Philomena project. Houston Stockton says they are currently re-evaluating costs for the project. Site plans tentatively list the construction value at $9.2 million. They initially had hoped to start demolition work later this month but are now reassessing that timeline.

“We were trying to move too fast,” he says. “I think it’s a project that’s definitely going to happen, but as far as the timeline, I don’t think we really have one right now.”

According to preliminary plans on file with the city of Spokane, Ron Joseph Architecture, of Spokane, is designing the four-story, mixed-use facility that will have a total of roughly 102,000-square-foot.

The first floor of the L-shaped facility will host the apartment lobby, mail, and office space, as well as a mix of retail, commercial, and food service spaces, according to preliminary site plans, which show the northernmost ground-level commercial space will have 11,400 square feet, while the space abutting Hamilton Street will have 8,900 square feet.

Each residential floor of the planned mixed-use facility will have 11 one-bedroom units and 10 two-bedroom units, for a total of 63 living units throughout the building, according to site plans.

Houston Stockton says Divcon Inc., of Spokane Valley, has been working with him on the project’s budget and scope and will likely be the general contractor on the project. Spokane developer Kent Hull is listed as the project applicant.

Ideally, Stockton says, he would like to demolish the existing emissions facility in March or April, with construction of the new structure slated to begin in May or June, though he notes the timeline has not been finalized.

Once construction begins, he estimates it should take a year to build the Philomena.

John Stockton, who played basketball for Gonzaga before going on to a hall-of-fame career with the Utah Jazz, has invested heavily in the GU neighborhood since retiring from the NBA.

The Stockton family also is behind the 57-unit, 88,000-square-foot Matilda mixed-use development, which is along Hamilton and just north of the Philomena site, and the 8,400-square-foot Clementine Square multitenant retail development, which is nearby at 829 E. Boone, across Hamilton Street and less than two blocks north of the Matilda site. Both were developed in recent years.

Stockton says the Philomena will be different visually from the Matilda project, but the apartment layouts will be similar.

Despite its proximity to the university, the apartments won’t be marketed specifically to students, Stockton adds, though he expects that, much like the Matilda, students will make up the majority of tenants.

The plans note that a parking garage might be developed as a separate project, as it will be shared with the neighboring The Warehouse gym, located at 800 N. Hamilton, just south of the planned development. John Stockton also is in the ownership group of The Warehouse and an affiliated company, LLC&M LLC, which owns the 1.8-acre property on which the gym is located, county assessor’s records show.

Houston Stockton says plans have shifted away from pursuing a garage at this point, citing cost as a barrier.