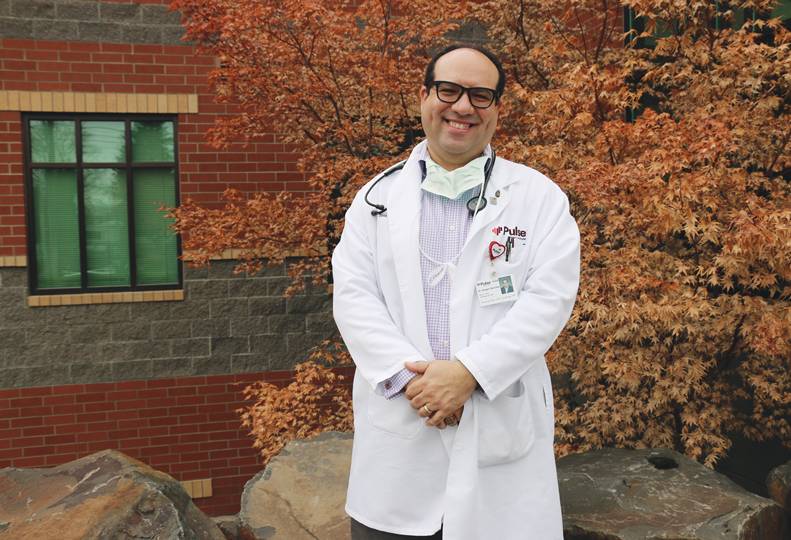 -VIRGINIA THOMAS
Dr. David Bragin-Sanchez says the new center will enable MulitCare to treat patients who are hesitant about going to the organization’s downtown campus.

MultiCare Health System is expanding its cardiac rehabilitation services with the opening of a new Pulse Heart Institute center in Spokane Valley.

“The space that the new cardiac rehab center will occupy is an existing space that is located inside MultiCare Valley, conveniently just around the corner from the ICU,” Maloney says.

Maloney says much of the money used to develop the space came from MultiCare’s May 2019 Heart Strings fundraiser, which raised more than $230,000.

Maloney says the center will serve four to six patients at a time and will be staffed by a registered nurse and an exercise specialist. He says MultiCare expects it will have about 3,000 patient visits per year at the Spokane Valley location.

Dr. David Bragin-Sanchez, a heart failure specialist with Pulse, says about 40% of his Spokane Valley cardiac patients refuse to travel to the main Pulse location, at 910 W. Fifth, on Spokane’s lower South Hill.

“Cardiac rehab is an essential piece for our patients with coronary disease, valve disease, and heart failure,” Bragin-Sanchez says. “The problem that we had was that the patients who lived in the Valley had to go downtown to receive this type of care. We know patients from the Valley don’t necessarily always like to go downtown.”

Bragin-Sanchez says some patients are reluctant to arrange for transportation from Spokane Valley to the Spokane center. Bringing the cardiac rehabilitation center closer to those patients will ensure they can access cardiac rehab services more easily, he says.

“That’s something that will definitely improve their cardiovascular care,” Bragin-Sanchez says.

Spencer Sessions, a former patient at Pulse, lives in Post Falls. After he suffered a “widow-maker” heart attack--a major cardiac event in which a coronary artery is mostly or totally blocked, halting blood flow to a portion of the heart -- last year at age 45, a representative of Pulse invited him to visit the Spokane facility.

There, he was paired with a young physical therapist. Sessions says that the similarity in age helped him feel more comfortable with the idea of completing his cardiac rehabilitation in Spokane.

“I was the youngest one there, which at first was very uncomfortable for me. My brain was still functioning, but my body wasn’t functioning very well,” Sessions says. “As we talked, I felt that he would be able to point me in the right direction. He would be able to push me a little further than maybe he would push somebody who was in their 70s or their 80s.”

Sessions’ 12-week treatment at Pulse included working with a dietician to change his eating habits, as well as a supervised exercise regimen that included stretching, monitored cardio, and weight lifting.

Sessions says he felt the care he received and the bonds he forged at Pulse made the trip to Spokane three days a week worthwhile.

“They’re some of my dear, closest friends that I keep in contact with to this day,” he says. “I was matched up with a 67-year-old gentleman, and he was able to do things and run circles around me when I could barely walk on a treadmill. It was something that motivated me as I worked with those patients.”

That motivation remains, he says.

“I try to go between 20 and 25 miles a week right now, as far as jogging and running,” Sessions says.

In 2021, Sessions plans to complete a half marathon with his brother.

Sessions says traveling from Post Falls to the Pulse center in Spokane wasn’t an issue for him, but Spokane Valley is a shorter drive for him and other Idaho patients.

“I know there are patients across the border here in North Idaho who would be able to seek that care and that treatment as well,” Sessions says. “It’s going to broaden the spectrum of the patient base that they’re going to be able to help. We live in a region where there are, unfortunately, many cardiac arrests.”

According to the Washington state Department of Health and the Spokane Regional Health District, heart disease was the No. 1 cause of death in Spokane County in 2017. In that year, the most recent for which data is available, 227 deaths were attributed to heart disease.

Bragin-Sanchez says the volume of patients at the Pulse center in Spokane has been reduced intentionally to lower the risks posed by COVID-19. The presence of a second location for cardiac rehab patients will help to boost the number of patients that providers can meet with, he says.

Sessions says that the Spokane center was busy even before the pandemic struck.

“They were bursting at the seams and trying to find a way to get as many patients in as they could without being overloaded,” Sessions says. “By being able to open up another facility out in the Valley with the current population that Spokane has, it’ll make it so that the personalized touch is going to remain.”