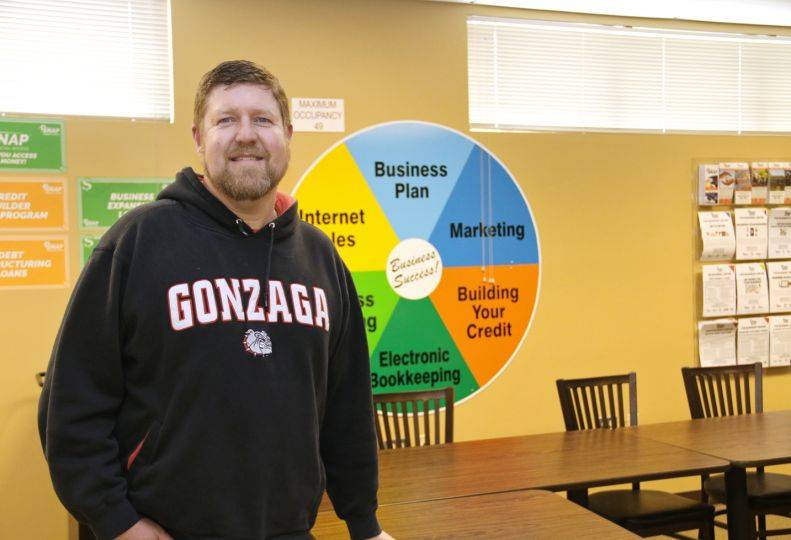 Roughly 40% of student loan borrowers are expected to default on their loans by 2023, according to an analysis by The Brookings Institution, a Washington, D.C.-based nonprofit public policy organization.

In Kootenai County, 17% of people have student loan debt and 16% of student loan holders are currently in debt collection.

Overall, the U.S. currently has $1.4 trillion in outstanding student loans.

“Most kids hear they won’t have to pay it back until six months after they’re done with school, and to an 18-year-old kid that might as well be a millennium away, so they get strapped with debt,” he says.

Hildebrand contends that the issue stems from a lack of information available to students before they take out loans for school.

“I think there’s not a whole lot of information. Servicers are quick to provide loans without talking about them,” she says. “We just assume that we have to take them, have to pay them off, and we don’t know that we have options.”

Hildebrand’s company, which was established five years ago, offers counseling and advocacy services to borrowers struggling with student debt.

Hildebrand says the most common question she gets is about student loan payments increasing to rates borrowers can’t afford and says her company will do a personalized assessment to find the best course of action to help the client knock out the loan.

The lack of information leads borrowers to give up, Hildebrand says.

“They just feel like they’re stuck,” she says. “It’s kind of like having a chronic cold and not knowing what to do about it.”

MacPherson also contends that the wide breadth of repayment options can be frustrating for borrowers.

MacPherson also warns that deferring loans or entering forbearance—meaning no payments are being made and the loan is placed on hold—can cause problems later down the line.

“If you have this unsubsidized loan … it’s growing, and a lot of folks are strapped and stressed out so all they can see is today and maybe the end of the month,” he says.

Kelli Hawkins, public relationship manager for Spokane Valley-based Numerica Credit Union, agrees that a lack of information is part of the issue.

This led Numerica to establish a “$tarting Off Right” financial education program in every school district in the Spokane area. The program provides workshops on establishing education goals, credit scores, budgets, and thinking critically about avenues to achieve said goals, Hawkins says.

In 2018, the program hosted 700 hours of education in 57 schools and organizations in the area.

“I think it’s important because they need to understand debt, understand credit, and understand budgeting before they take on loans,” she says.

“We’re talking about which student loans to take out, what student loans to be leery of,” she says. “I know when I went to college … nobody once told me how to navigate through this system and how it is that the choices that we make going into college affect when we’re out of college.”

The objective of the initiative is to get into high schools to teach students, parents, and others about student loans.

MacPherson adds that the climbing cost of tuition also is a factor in the rising numbers of student loan defaults. Tuition increased at an average rate of 3.2% between the 2007-2008 school year and the 2017-2018 school year, according to data compiled by The College Board, a New York-based nonprofit dedicated to providing students with higher education information.

On top of that some employers want employee candidates to have increasingly more education.

For defaulted federal student loans, Hildebrand and MacPherson agree the best course of action to rectify the situation is through a rehabilitation program.

A rehabilitation program is set up through a loan servicer or debt collector, which calculates a payment based on income. If the borrower pays on time for nine months, the loan is taken out of default and the default is erased from the person’s credit report.

MacPherson says it’s important for borrowers to know that unlike most loans, which in the state of Washington have a statute of limitation of six years, federal loans have no limitations on how long they can continue to collect a debt.

“With (federal) student loans there’s no statute of limitations, you’re going to pay them until you pay them off or die,” he says. “They can’t be included in bankruptcy and it’s the only thing that is never going to fall off your credit report.”

Which means, if someone defaults on a federal loan and no action is taken it could hinder that person’s ability to buy a home, take out any loans, or just get ahead financially, he says.

He also recommends establishing a budget.

Hawkins also recommends establishing and maintaining a budget and adds that staying in contact with loan servicers is also beneficial.

“Having a good relationship with your lender is key to being able to get back on top of your loan payments,” she says.

Participants are required to reapply for the repayment plan every year. Under these plans, if the borrower makes all payments on time for 20 to 25 years, depending on the plan, any remaining debt will be forgiven.

Qualifying borrowers also can apply for the Public Servant Student Loan Forgiveness program, which allows borrowers who work in the public sector—meaning government employees, nonprofit employees, and teachers, among others—are able to have their loans forgiven provided they meet the criteria.

Criteria includes making 120 payments on time, being enrolled in an income-driven repayment plan, and having qualifying loans. Defaulted loans are not eligible.

For private student loans, the courses of action available are dependent on the loan servicer.

The report says signs include guarantee of lower payment and debt forgiveness, a promise of prequalification before personal information is provided, a charge for forms, and transaction fees.

Students should be aware that qualified relief programs are free, and no fees should be required, according to the report.