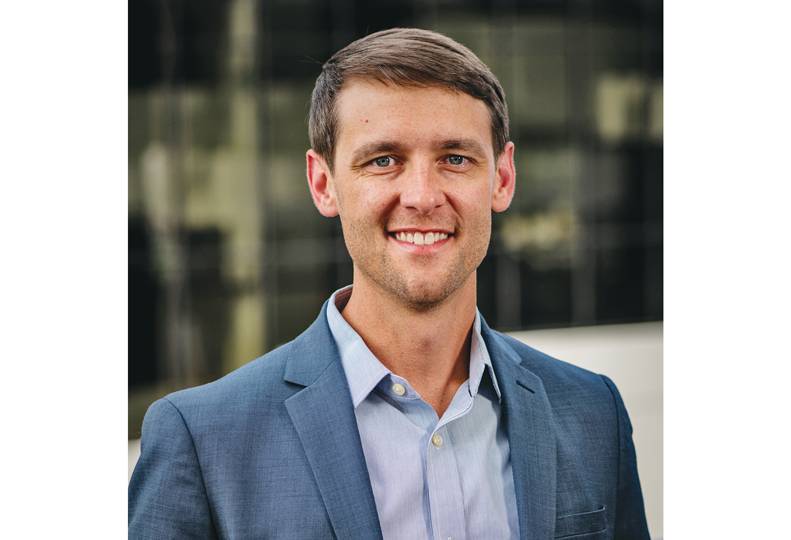 “I’m technically the first person they hired as part of this corporate group,” he says. “It was 2009 in the middle of the Great Recession and they’re hiring this kid that’s fresh out of law school.”

The firm also hired a few more seasoned attorneys to form the practice group, which now consists of 12 attorneys.

“Now I’ve been chair of the corporate and IP transactions group the past two years,” he says. “My focus is really with startups. I get to work with really cool innovative technology startup companies every day.”

While not a patent attorney, Wadkins says he works on the softer side of IP – trademarks, trade secrets, and IP transactions.

Most of his work is with Inland Northwest-based companies, although he does some work for clients all over the U.S. and in other countries.

Wadkins, who grew up about 15 minutes outside of Ellensburg, Washington, was first exposed to the Spokane business community through the Hogan Entrepreneurial Leadership program while an undergraduate at Gonzaga University.

“Spokane was the perfect fit for me, because I saw how much business activity there was and how many exciting companies there were in Spokane,” Wadkins says. “It has more of that approachable, small-town feel. That’s why we have so many people that move from small towns to Spokane. Our firm is full of them.”

He says he decided to go to law school at Gonzaga to gain the skills necessary to be a valuable asset for businesses.

While Wadkins says he has a number of mentors at Lee & Hayes, the person who had the biggest impact on his career trajectory was Richard Denenny, who was a securities attorney with K&L Gates in Seattle when they first met through Gonzaga’s Hogan program.

After Denenny, a Spokane Valley native, returned to the Spokane area as in-house counsel for Spokane Valley-based Next IT Corp and later Liberty Lake-based Telect, Wadkins was able to recruit his former mentor to Lee & Hayes.

“Any chance I got to talk to him about it, I tried to get him to join Lee & Hayes,” Wadkins says. “It took less than a year for him to become president of our firm.”

Denenny says he knew Wadkins well from Wadkins’ college days, and Next IT did some business as a client of Lee & Hayes while he was in-house counsel there.

“Dan is without question indirectly, if not directly, the reason why I came to Lee & Hayes,” he says.

“Dan’s been superstar from Day One,” he says. “His level of gumption and understanding far exceeds what one would expect. His practice is a function of incredible hard work and talent.”

Wadkins credits his wife, Susanne, a Spokane native whom he met at Gonzaga, for “every piece of success.”

“We were the first of our group of friends to get married one year out of undergrad,” he says. “For 35 – four kids and 12 years married and everything else — I think we have a pretty good head start.”