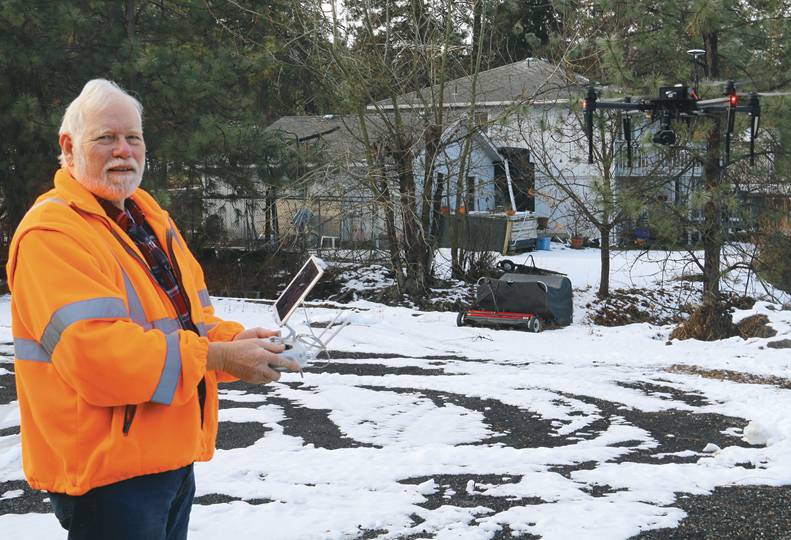 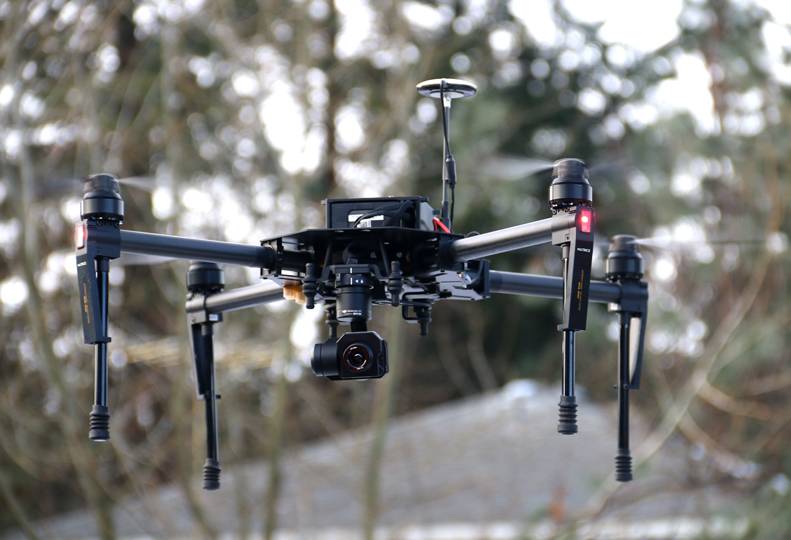 Thomas Ethen’s diverse resume through the years has led to the one job he finds to be most enjoyable of all: remote pilot in command—more commonly known as drone pilot.

With that official designation from the Federal Aviation Administration, Ethen, 72, is also a certified Level 1 thermographer, meaning he can collect and interpret basic thermal images.

As the sole proprietor and employee of Western Unmanned Aerial Systems, Ethen has spent the past four years working with commercial businesses, helping them to identify how best to treat leaking and damaged rooftops. He runs the home-based business in Nine Mile Falls, in Stevens County, just northwest of Spokane.

With hundreds of hours of training, Ethen has learned how to gather thermal images off rooftops effectively and interpret them. The two drones he flies captures high-resolution images and video, he says.

Holding pictures of East Valley High School, Ethen points to dozens of splotched areas that may show moisture in the school’s roof.

“You’re able to get down to the gnat’s eyebrow in terms of exactly where the problems are,” he says.

His rooftop analysis has the ability to replace the time-consuming physical inspection, though verification of his findings still requires someone to access the roof to take core samples, he says.

“My goal is to help this roofing industry do a better job for their customer and for their employees,” he says. “If I can keep them off the roof then their worker’s compensation rate goes down.”

His goal is to also help companies and organizations save money.

Recently, a food processing company with a facility in Western Washington hired Ethen to inspect a problematic roof on its 240,000-square foot building.

One roofing company told the food processor it needed to replace the roof entirely at a cost of $2.5 million, Ethen says.

That conclusion was based on 10 core samples of the roof in which the roofing company said 90% revealed water damage.

A second opinion from another roofing company showed that only three of the 14 core samples it gathered showed moisture damage.

The thermal imagery software findings more closely matched the evaluation of the second company, which called for repairs and not a full replacement.

Ethen says he’s now in contract talks with this cold-storage refrigeration company about inspecting more of their rooftops.

“They have 250 buildings worldwide,” he says. “Their head of maintenance has told me that based on what he saw from the Woodland, Washington, roof that it would make sense for them to inspect every roof every five years.”

In the first two to two-and-a-half years of operations, Ethen says most of his time was spent in training and learning the new technology.

Depending on the size of the building, Ethen charges between $2,000 to $5,000 per project. That includes flying the roof and then spending anywhere from the next three to five days “stitching” together hundreds of rooftop images on the computer for his final report.

There’s a seasonal component to the work he does, at least in Pacific Northwest.

“I can’t do it in the winter because there’s not enough heat absorbed into the roof,” he says.

The imaging software helps identify temperature variations in the roof, he says. In the summer months – or in warmer climates – as a roof cools at dusk, it takes longer for water-damaged areas to cool. Darkened splotches on the image reveal a buildup of water.

“Those blackened areas reveal greater mass, which is moisture, and can clearly be defined,” he says.

Ethen has what’s called a “daylight waiver” from the FAA, which allows him to use his drones to fly at higher altitudes above buildings after the sun sets.

Using a software package called AirMap, Ethen can file instantly an online flight plan request with the FAA, notifying the agency of when and where he needs to fly.

Authorization typically is granted in less than five minutes after submitting the request, he says.

Increasingly, he says, Western UAS is being called on to perform tasks beyond rooftop studies.

He’s used software imagery to identify airtightness for energy audits in buildings and homes, he says.

Last year in California, for example, he helped assist PrecisionHawk, a Raleigh, N.C.-based drone and data company that was contracted by Pacific Gas & Electric Co. to inspect its powerlines. Under court order, PG&E had to inspect 127,000 miles of their powerlines.

“You can’t walk that very fast,” he says. “The project turned out to be the largest assembly of drone operators ever. There were hundreds of us on the project.”

Ethen and other drone operators photographed every wooden power pole and lattice tower in PG&E’s network, he says.

“We would photograph each insulator, every connection – any place where there was a mechanical thing happening,” he says.

Ethen worked for a month on that project, he says.

Originally, he started Western UAS under the name Northwest Aerial Perspectives about 4 1/2 years ago.

“I kind of had to step back from it for a while because technology was changing so fast that in order to keep up, it required major cash infusions,” he says.

Ethen estimates investments in equipment alone have cost him between $35,000 to $40,000. He also needed to invest in training.

Born and raised in Portland, Oregon, Ethen earned his bachelor’s degree in business from the University of Portland and served in the U.S. Air Force. In his professional career, he has worked as a long-haul truck driver, a political lobbyist for the automotive and food processing industries, a commercial photographer, and a business partner in a custom cabinet shop in the Sacramento area.

“I guess that I’m just constantly curious,” he says.

He moved to the Inland Northwest after the death of his wife roughly seven years ago. It gave him time to think about what he’d like to do next.

“When I was with the food processer’s association, I was responsible for technical programs related to the industry for Idaho, Oregon, and Washington,” he says.

With a developing interest in drone technology, he began to consider how to merge his interest in what was becoming his fast-growing hobby of drone flying.

“I started looking at some of the biggest weaknesses in the food processing plants,” he says. “It turns out it’s the roofs on their buildings.”