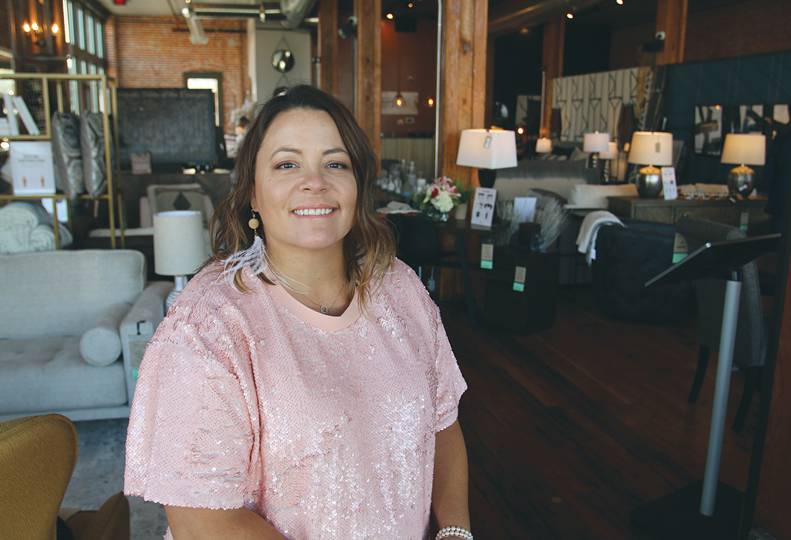 The new store is in the same building where Arch Hanley, grandfather of current Acme CEO Heather Hanley, started the company 75 years earlier.

Hanley, the third generation of her family to operate Acme, says the company leased about 4,000 square feet in the historic Framingham Building, at 1730 E. Sprague, for the new store. It’s located across Sprague from the company’s signature furniture store, The Tin Roof, and its reSkued consignment and closeout shop.

Hanley says the new store is intended to provide a more “accessible” price point than The Tin Roof, with more “grab-and-go” options, in contrast to the more custom offerings at the 35,000-square-foot showroom across the street.

Two people work exclusively at the new store, she says, in addition to the 25 employees at Tin Roof.

Bide & Burgeon opened on Oct. 15. Hanley says the company timed the opening of the new store to coincide with Acme’s 75th anniversary. Founded in the Framingham building as Acme Electric, the company repaired radios when it started and moved into selling televisions in the 1950s, later evolving into a furniture and home furnishings retailer. Her parents, Jim and Sue Hanley, remain involved in the business.

As Acme returns to its roots, the original function of the building returns as well. While the Bide & Burgeon space most recently housed the Vien Dong Vietnamese restaurant, which has moved to 3435 E. Trent, the Framingham Building originally housed Barrett Upholstery, Hanley says. She points out that the traces of the painted Barrett Upholstery sign still can be seen on the north side of the old building.

The new furniture store is one of several changes in the works on the 1700 block of east Sprague Avenue. Hanley says a bakery is negotiating to take space next door to Bide & Burgeon, and Spokane developer Jordan Tampien has bought the old Checkerboard Bar, at 1716 E. Sprague, and is converting it into the Checkerboard Tap Room.

“It’s exciting that there’s a lot of growth in the Sprague Union District,” Hanley says.