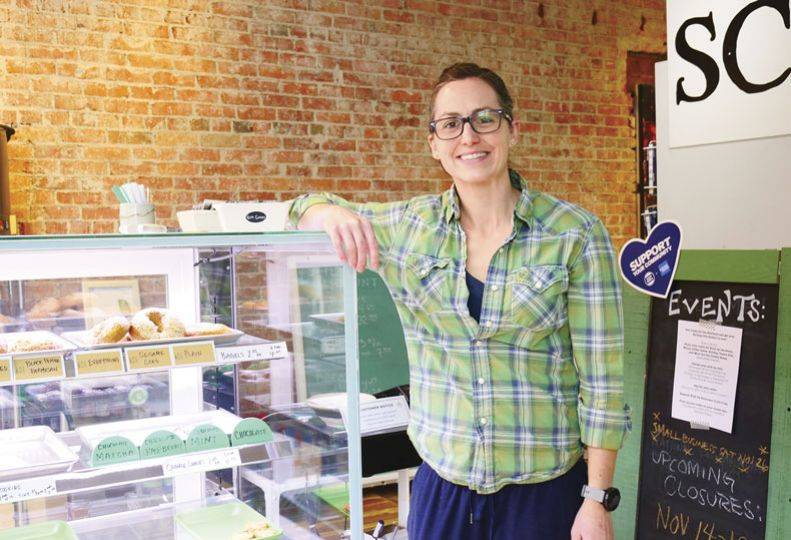 A bakery that opened on the South Hill five years ago has moved downtown.

Owner and head baker Lydia Cowles says Twenty-Seventh Heaven moved to the downtown location for a handful of reasons, including its larger kitchen, accessibility to more customers, and better parking. Cowles says the bakery’s lease at its South Hill location was coming to an end, providing an opportunity to move.

“The front of the house was so big … we couldn’t expand our kitchen at all,” Cowles says of the South Hill space, which was less than 1,400 square feet. The new space is about 2,000 square feet, she says.

“My office is three times the size, and I have a giant dry storage room,” Cowles says.

Renovating the space required plumbing work, as well as connecting to the three-phase electric system that runs through the west end of the block. The biggest project, Cowles says, was the flooring.

“All the floors upstairs were raw wood, and the health department wants your floors to be nonporous and cleanable,” Cowles says. “My parents do flooring. They mostly do tile, but my dad sanded those floors down and used a lot of wood filler ... and a resin seal on top.”

The basement of the space is remodeled into a 500-square-foot leasable events space Cowles is calling Twenty-Seventh Heaven Underground. The events space once functioned as a speakeasy, she says, and many historical elements have been left untouched, such as original tile floors, stairs leading to a door that has since been walled over, and a closet in a corner whose walls are scrawled with graffiti and signatures with dates going back more than 100 years.

Cowles and her assistant baker handle all of the bake shop’s operations, she says. However, she’s considering hiring an additional employee.

“We’d probably start with one (new employee) who would mostly do front-of-the-house stuff, and probably just during peak hours,” Cowles says. “I love interacting with my customers and getting to know their names. My assistant, Mike, feels the same. We like to have our chit-chats, but it’s important to be able to do what we need to do so that we can go home for the day.”

Some of Twenty-Seventh Heaven’s products are available at Spokane grocery stores My Fresh Basket and Main Market Co-op. Its coffee cake is sold by Pitotti Coffee Roasters and by Arctos Coffee & Roasting Co., both located in Spokane, and Pitotti also sells the bake shop’s bagels.

Twenty-Seventh Heaven is a play on the phrase “seventh heaven” and a nod to the fact Cowles opened the first iteration of the bake shop on the South Hill on Jan. 27, 2017.

“Opening my bake shop was my 34th birthday present to myself,” she says.

Mama Torrez Salsa Co. plans to expand throughout the West Coast. The Spokane-based salsa and chips maker expects to sell its products at 1,000 new retail stores in the first half of 2023.

The expansion plan is led by the company’s new CEO, Chris Hannigan, who is a second-generation Mexican American, a press release states. Hannigan took the reins on Nov. 14, and has recruited several people to Mama Torrez Salsa’s C-suite to gear up for the expected growth of the company.

Hannigan says that to ramp up production, Mama Torrez Salsa will add 15 full-time employees over the next year and move to a larger space in the next few months.

Mama Torrez Salsa was founded here in 2017 by Gilda Meyer. Hannigan says the planned expansion and the new leadership team were funded through a capital investment early last month “derived from a group of private equity backers of experienced food investors and prominent food executives.”