Nearly 400 providers have graduated in past 20 years 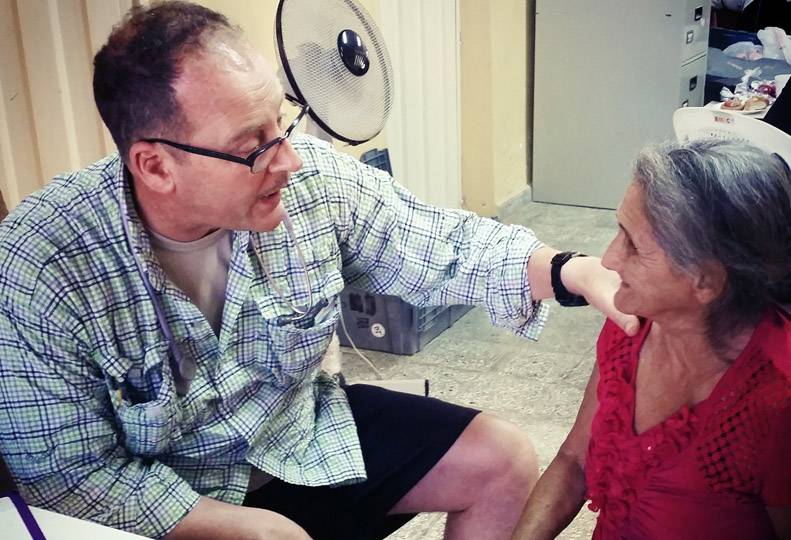 -—Nicole Muskett
MEDEX student Sam Millett, left, shown working with a patient while on a medical mission to Honduras, is a military veteran who says he always wanted to work in health care.

Currently housed in the Schoenberg Center on the Gonzaga University campus, the program is entering its 20th year, with 377 graduates to date.

Don Coerver is the current site director of the university’s MEDEX PA program in Spokane.  Don is a veteran of the U.S. Air Force, and has a long history of work in the PA profession.  He gradually transitioned from the profession to teaching, and this year welcomed Class 20.

“Many people have heard the term physician assistant, but don’t know exactly what the profession entails,” Coerver says.

Physician assistants provide patient care, diagnose diseases, and can prescribe medications.  They are supervised by a physician, but are trained to work either autonomously or as part of a team.

Traditionally, physician assistants were former military personnel. There were two reasons for this. First, a shortage of doctors developed in the mid-1960s, which contributed to a lack of medical access in rural communities and low-income urban areas. Secondly, some veterans returning from Vietnam had extensive medical training through the military, but no corresponding civilian job that could make use of that expertise.

The first physician-assistant curriculum was built by a Duke University professor based partly on the medical training implemented by the military during World War II, Coerver says.  The program helped address both contributing factors effectively.

In 1969, the UW MEDEX Program was started and housed on the Seattle campus.  In 1997, UW introduced the Spokane program.

The program has taken a competency-based approach to curriculum design since its founding, according to its website. The two main components of the curriculum are the didactic, or classroom, phase and the clinical phase. Each section takes about a year to complete, and master’s-level students have an additional quarter of material preparing them for advanced clinical and leadership roles, the website says.

It says the centerpiece of the clinical phase of training is a four-month primary care preceptorship, most often completed in a family practice setting, or students may work with general internal medicine physicians and PA.

MEDEX offers Bachelor and Master of Clinical Health Services degrees. All students who complete the program successfully also earn a certificate of completion, which qualifies them to take the national certification exam.

The website lists the current tuition for the two degree programs at $59,509, or about $7,439 per quarter for eight quarters, and $71,710, or about $7,968 per quarter for nine quarters, respectively, with those figures being subject to change. Those costs don’t include certain other fees, nor books, equipment, supplies, travel expenses, or insurance.

The university says MEDEX has seen students’ first-time pass rate for the national licensure exam rise from 79 percent to 93 percent in a span of six years, due partly to a curriculum overhaul to better fit how the profession defines competency.

No longer just for veterans, Coerver notes that the PA profession has expanded to include anyone interested in that career path who earns a bachelor’s degree and accrues 2,000 hours of patient care. He says it also is often a second career.

“Some of that has to do with the patient care requirements, but mostly it seems as if the students follow their passion and find our program,” he says.

Theresa Schimmels is a graduate of the first MEDEX PA program class held in Spokane.  She has worked for Rockwood Dermatology for 13 years.

Schimmels says she was a respiratory therapist for 15 years, and at 34 years old, she decided to change careers.

“For years, people had been telling me I should further my education,” she says.

As a single mother, Schimmels says she had to weigh her options carefully.  She ruled out medical school because of the length of the program and the residency requirements.  She then looked into nurse practitioner programs and found that she would have to start her education from scratch, so she ruled that out too. Then she discovered physician assistants, and MEDEX.  She had the required 2,000 hours of patient care so she applied and was accepted.

Now, 13 years later, Schimmels says she is proud of the work she does and happy that her position allows her to work in specialized health care. She has forged a working relationship with her supervising physician, Dr. Dan Henderson, and Rockwood Dermatology has added a second PA position within the practice to allow for more specialized dermatology care options.

Hayward says he previously worked as a mental health case manager, and one day, people in the office were talking about their future career and education goals.

“I thought about getting my master’s degree in social work, but it just didn’t quite meet my needs.”

The more he considered his options and thought about what really mattered to him, he knew he wanted to work in health care.

According to Coerver, the Spokane MEDEX Program has kept the percentage of military veterans between 15 percent and 35 percent of its student base.

Sam Millett is a current student in the program.  He is also a veteran who served as a military intelligence officer and spent time in Korea, Germany, Italy, Slovenia, Bosnia, South Africa, Panama, Iraq, and the U.S.

Millett says he was drawn to the medical profession from a young age.  His mother and grandmother worked at a hospital, and he worked as an orderly from the age of 16.  Millett considered medical school, but felt he wouldn’t be successful because of a math block. So he enlisted in the military.

After his military retirement, Millett says he went on the hunt for a second career. He knew he wanted to work in the medical profession so he looked at medical school again, but ruled it out.  Millett then considered nurse practitioner programs, but they just weren’t what he was looking for. When he found the physician assistant program, he knew it was the right fit for him.

So far, Millett says he is impressed with his classmates, and that it’s amazing to attend school with a group of people who know what they want, have tremendous work experience, and are emotionally mature.  He also enjoys that his teachers provide practical real world training.

Millett said, “This profession is the culmination of my previous work and life experiences along with my passion to help and serve others, and I can’t wait to get out there and be part of a team.”