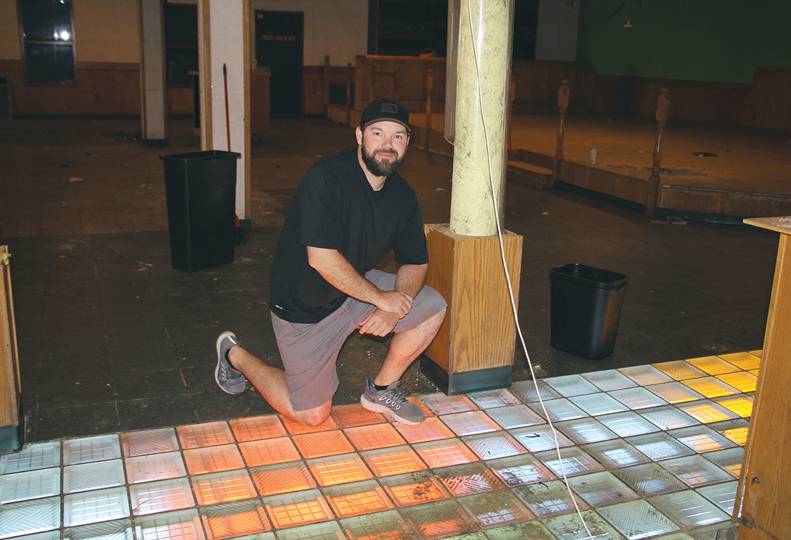 -KEVIN BLOCKER
Restaurateur Josh Blair shows off the lighted glass floor in the old Goodtymes bar building, in Spokane Valley. The floor will be replaced as the structure is remodeled into a new Pint House.

Spokane restaurateur Josh Blair and business partner Tom Griffiths have purchased the former Rockin’ Goodtymes Bar & Grill in Spokane Valley and have started remodeling the 6,500-square-foot building to build a second Pint House Burgers & Brews with plans to open either at the end of the year or early 2022.

“The hope is to be open by the end of the year, but we’ve done this before and know it can take longer,” he says. “And it may be better to wait a little longer because we’re hoping for the labor pool to open up.”

He anticipates hiring 15 employees once the new location opens at 9214 E. Mission, just south of the Interstate 90-Argonne Road interchange.

Blair and Griffiths own and operate a Pint House establishment at 3325 W. Indian Trail, in northwest Spokane, which opened in late February.

“Tom and I had been looking around for the last couple of years,” Blair says. “We looked at a lot of locations, but nothing felt right, but this is a perfect location. It’s next to a (Holiday Inn Express) hotel and right off the freeway.”

Blair owned 24 Taps before selling it to his former employee, Trevor Hoffman.

Blair maintained the rights to the 24 Taps menu, which features burgers, salads, sandwiches, and wraps. He plans to use the same concept at Pint House, in Spokane Valley, that he used at Indian Trail: a family restaurant with 30 82-inch, high-definition TVs tuned to sporting events and music playing throughout most of the building.

“I’m so excited about bringing this to the Valley,” he says. “We going to take our time with the remodel and make sure we get this done right.”

Blair anticipates a seating capacity of 225 patrons, with room for seating up to 40 at an outside patio, at the old Goodtymes building.

The building, which at times has been a bar, a tavern, a dance club, and a restaurant, tended to have an open-air feeling to it, so there’s no need for a complete interior demolition, Blair says. However, the multi-colored lights under the glass flooring near the bar will be a thing of the past, he says.