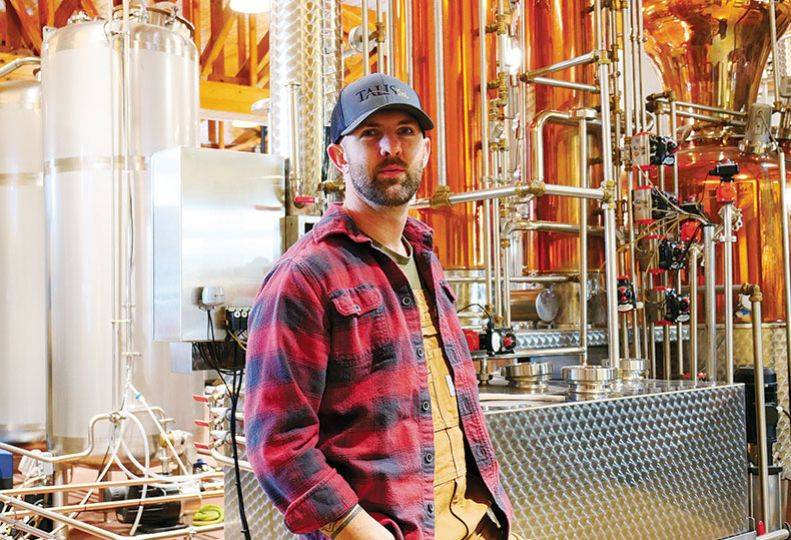 -—Virginia Thomas
Aaron Kleinhelter is the head distiller at Browne Family Spirits, which plans to open Dec. 2 in East Spokane.

A winemaker with roots in Spokane plans to open a distillery and tasting room here next month.

Andrew Browne says Browne Family Spirits will open Dec. 2 in the former Warrior Liquor space, at 714 N. Lee, in East Spokane. Hours of operation will be 11 a.m.-8 p.m. Sunday to Thursday and 11 a.m. to 9 p.m. Friday and Saturday.

Browne, who was born and raised in Spokane, says he’s been seeking a way to return after spending years in other parts of Washington.

“There isn’t really a heart of distilling in the state of Washington, so my thought was, why not do it in your hometown?” Browne says.

Browne is owner of Walla Walla, Washington-based Browne Family Vineyards, which has a 103-acre vineyard and a tasting room in Walla Walla, as well as tasting rooms in Seattle, Bellevue, and Tacoma. He launched Precept Wine in 2003 after gaining experience in wine sales for several wine brands.

“It’s not a giant distillery, so we can start small … and do single batches of everything,” Browne says.

The distillery has been producing spirits under the Browne label since Browne opened a tasting room in Bellevue for both Browne Family Vineyards and Browne Family Spirits products a few months ago. The Spokane tasting room will have about six employees.

Initially, food options will include chips and salsa, pita chips and hummus, and cheese boards. Browne also is considering bringing food trucks to park on the large lawn on the south side of the distillery building.

The tasting room occupies about 1,000 square feet and is currently under remodeling for new flooring and a new bar. Browne says customers will be able to sit on the outdoor patio when the weather is good.

“If there’s some sunny days, even if it’s cold, people like to go outside and have a drink,” Browne says.

Most of the grains used in producing the spirits are sourced from Colfax and Ritzville. The leftovers of distilling, called spent grains, are distributed to local farmers for feeding livestock.

The Inland Northwest produces grains that are well-suited for use in spirits, Browne says.

“In the wine business, it’s about the terroir—where you get your grapes, what the varietal is, how you farm it,” Browne says. “Spokane has been blessed with great water coming out of the Rocky Mountains and the aquifer coming out of Idaho.”

Browne’s father was a physician who brought the family to Spokane in the early 1970s. Browne graduated from Ferris High School in 1987 before attending universities on the west side of the state. His father and stepmother still live in Spokane. Browne lives with his wife and children on Fox Island, in Puget Sound.