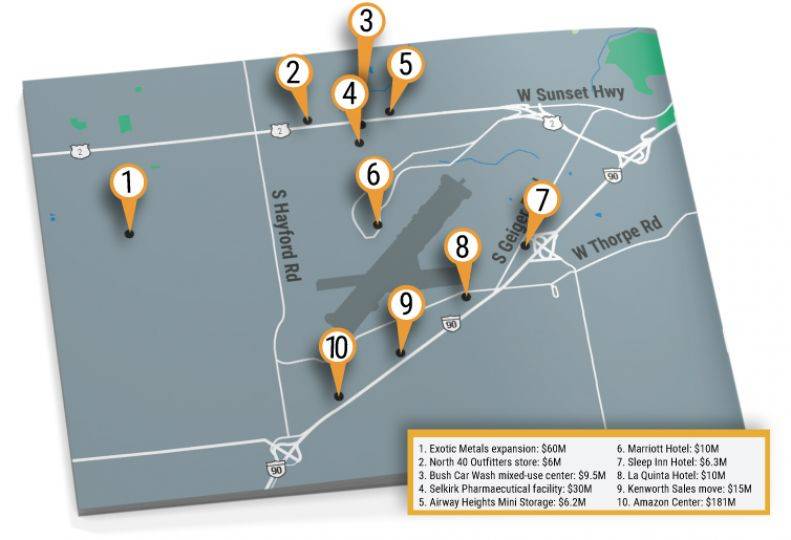 The West Plains has become a hotbed of development, with just under $500 million in new and ongoing construction occurring in the area.

Structures with a total of about 4.7 million square feet are planned or under development, and about 5,000 jobs are anticipated for the area, not including the planned expansion at Fairchild Air Force Base, which is expected to bring an additional 1,000 people to the West Plains.

Between 1,500 to 1,600 of those jobs are expected by this fall, while the rest will trickle in over the next few years, should all projects move forward, with a final surge in 2026 of over 860 jobs.

The biggest and arguably most well-known project is the Amazon Fulfillment Center, with a construction value of $181 million.

The 2.6 million-square-foot building, currently under construction at 10010 W. Geiger Blvd., is on track to be completed in October, says Todd Coleman, executive director of the West Plains-Airport Area Public Development Authority.

The Portland offices of T.C. Pursuit Services and Trammel Crow Co. are developing the center. Sandy, Utah based-Layton Construction Co. is the contractor on the project, and the Seattle office of DLR Group is the project architect.

The Journal first confirmed the Amazon project in late July of 2018, and since then, construction of the massive facility has moved at an aggressive rate, taking shape in just over a year.

Amazon has said it intends to hire 1,500 employees by this fall.

Brea, California-based Mullen Technologies Inc., which signed a letter of intent to develop its new Qiantu K50 electric sportscar on the West Plains, likely will have the next largest construction value should its plans for a 1.3 million-square-foot facility move forward.

Coleman says Mullen currently is working on finding investors and securing financing for the project, a needed milestone toward developing the plant.

Initial operations are expected to create 55 jobs, Coleman told the Journal earlier this year, and Mullen expects to employ over 860 people here by 2026.

If the company moves forward with its plans to bring its next-generation lithium battery research and development to the area as well, the job count could increase to roughly 3,000.

Mullen also has secured its first Qiantu K50 retail location, according to a company release, which is located in Oceanside in Southern California. The company expects to have the site in operation this month.

Kent, Washington-based Exotic Metals Forming Co. is involved in the third most expensive projects with its estimated $60 million campus expansion that will add up to 350,000 square feet of manufacturing and warehouse space to its property at 12933 W. McFarlane Road.

Work on the two-phase, two-building project is underway. The company has completed site grading and is prepping to pour the foundation, Coleman says.

The company plans to hire 150 employees per building.

Exotic Metals was established in 1966. The family-owned company manufactures components and systems for commercial airliners and military aircraft.

Coleman says Selkirk Pharma Inc., a Spokane-based injectable drug manufacturing and packaging company, is currently in the process of acquiring property on the West Plains for its proposed $30 million, 63,000-square-foot facility.

A pre-development application on file with the city of Spokane show the company has proposed the facility at 9110 W. Granite, in the southwest section of the Pacific Northwest Technology Park.

Selkirk Pharma was established just over a year ago at its current headquarters at 827 W. First, in downtown Spokane.

No timeline has been disclosed regarding operations envisioned on the West Plains, but a press release provided by the company indicates the Selkirk Pharma intends to begin filling client orders by the fourth quarter of 2020.

Kenworth Sales Co., a commercial truck sales company based in Salt Lake City, is moving forward with its planned $15 million relocation to the West Plains from Spokane Valley.

Company President Kyle Treadway recently told the Journal Kenworth plans to build a 60,000-square-foot facility at 9010 W. Geiger Blvd., south of the Spokane International Airport, where it will move from its current, 44,000-square-foot location at 6420 E. Broadway in Spokane Valley.

The company, which currently has about 50 employees in the area, plans to add at least 20 more employees once the facility is up and running, Treadway said.

A La Quinta Inn hotel and a Marriott Springhill Suites hotel, which ring in at $10 million each, are currently under construction near Spokane International Airport.

Sleep Inn is building a 42,000-square-foot, 87-unit hotel at 3809 S. Geiger Blvd., the third hotel project in the works near the Spokane International Airport, valued at $6.3 million.

The project is being built by Bismarck, North Dakota-based Consolidated Construction Co. and was designed by M+A Design Inc., of Fond Du Lac, Wisconsin.

On the north side of the airport, at 9000 W. Airport Drive, work on the Marriott Springhill Suites 71,000-square-foot, 109-unit hotel is well underway.

The four-story hotel, which is expected to employ over 40 people, is being built by Tharldson Hospitality, of Fargo, North Dakota, and DesignCell Architecture, of Las Vegas, designed it.

Projects valued under $10 million are the $9.5 million mixed-use center to be anchored by a Bush Car Wash, a North 40 Outfitters, and a $6.2 million Self Storage of Spokane.

The mixed-use project requires a state environmental survey to be performed before it can move forward.

However, preliminary site plans show the project consists of five buildings totaling over 27,000 square feet, including the car wash.

The project is planned on West Hilton Avenue, just east of the Hilton Garden Inn hotel.

Baker Construction & Development Inc., of Spokane, is the contractor on the project, which was designed by Kennewick-based Wave Design Group LLC.

Douglass Properties, owned by prominent Spokane real estate mogul Harlan Douglass, is building a $6.2 million storage facility that will include an office building and 14 storage buildings at 8620 U.S. 2, north of the Spokane International Airport.

The project is under review by the city of Spokane, which issued a grading permit for work on the site in April.

Construction on the planned North 40 Outfitters agricultural retail center at the northeast corner of Deer Heights Road and U.S. 2 is slated for later this year following the construction of a $1.5 million roundabout — currently under construction — being paid for by the city of Spokane and developer Deer Heights LLC, according to information on Spokane city’s website.

Coleman says the developer of Great Falls, Mont.-based North 40 is waiting until construction of the roundabout is completed later this year before moving forward with work on the proposed 106,300-square-foot store.

No construction cost has been confirmed for the development; however, it has been speculated that the project could cost roughly $6 million or more based on a predevelopment application filed in early 2017.