Whatever happened to developer Marshall Chesrown 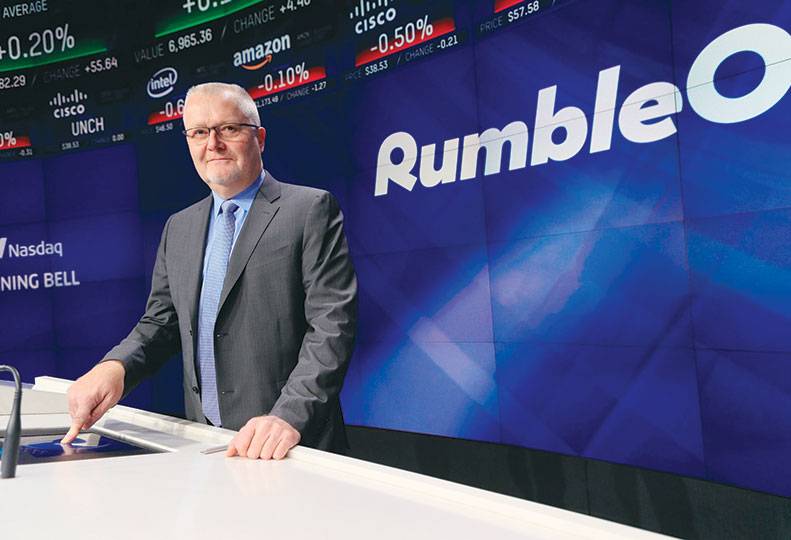 -—RumbleOn
Marshall Chesrown, CEO and chairman of RumbleOn, rings the bell to open trading for the Nasdaq exchange in this Dec. 22, 2017, photo.

Marshall Chesrown, the former prominent Coeur d’Alene-based developer whose ambitious real estate business collapsed during the Great Recession, has returned closer to his roots with a publicly traded company that buys and sells used vehicles.

Chesrown currently is chairman and CEO of RumbleOn Inc., an Irving, Texas-based business that features an e-commerce platform for consumers and dealers to buy and sell pre-owned motorcycles and other recreational powersports vehicles.

Chesrown couldn’t be reached immediately for comment for this story. He was last mentioned in the Journal in a recent update of Kendall Yards, the 78-acre development on the north bank of the Spokane River northwest of downtown. Chesrown owned that land before an ownership group affiliated with Liberty Lake-based real estate development company Greenstone Corp. acquired it in 2009.

“We delivered over a half-billion (dollars) in quarterly revenue for the first time in RumbleOn’s history, expanded gross profit to over 25%, and we increased net income 54%,” he says in the report.

The company reported second-quarter net income of $14 million, or 87 cents a share, up compared with a net loss of $3.4 million, or $1.05 per share, in the year-earlier quarter.

RumbleOn’s second-quarter total revenue was $546.1 million, up 224% compared with the year-earlier quarter.

Chesrown co-founded RumbleOn in 2016. The company went public the following year, and Chesrown rang the bell at the Nasdaq exchange to open trading on Dec. 22, 2017.

The company’s stock price peaked at $214 per share in September 2018 but has been trading at considerably lower share prices since then. RumbleOn’s share price was $16.88 as of the market close on Monday, Oct. 3.

RumbleOn owns 55 retail locations and claims on its website that it has relationships with hundreds of dealers, with the closest dealers to the Spokane-Coeur d’Alene area being Ride Now Powersports Tri-Cities and Rattlesnake Mountain Harley Davidson, both in Kennewick, Washington.

With RumbleOn, Chesrown, a Spokane native, has returned to his business roots in automotive retail sales. He had amassed his first fortune in the auto business in Colorado before he came into prominence as a real estate developer here in 1999. At that time, he began developing Black Rock, a luxury golf community on the west side of Lake Coeur d’Alene, which he claimed could reach a value of $500 million. The development plans included an 18-hole private golf course, and 375 residential units on 650 acres.

In 2003, shortly after opening the Black Rock golf course, Chesrown began work on Legacy Ridge, which was planned to have at least 200 upscale homes with a total value exceeding $100 million.

One year later, Chesrown purchased a 78-acre development site he later named Kendall Yards through a U.S. Bankruptcy Court auction following the business failure of Metropolitan Mortgage, of Spokane. At one time, he envisioned a $1 billion urban village development there with more than 2,600 living units and 1 million square feet of commercial space.

Chesrown’s real estate empire, however, collapsed as quickly as it had grown.

The Journal first reported indicators of financial problems with a Chesrown development in October of 2008 when a Spokane contractor filed a lien against the Chesrown company developing Bellerive condominiums along  the Spokane River, in Coeur d’Alene.

A year later, Chesrown surrendered 102 acres of land at Legacy Ridge to AmericanWest Bancorp in lieu of making further payments.

In November 2009, he sold the Kendall Yards site to Greenstone Corp.

In 2011, Black Rock parcels were slated for auction. That spring, 10 homeowners bought the golf club there.

In 2013, Chesrown filed for personal bankruptcy protection in U.S. Bankruptcy Court in the District of Florida, where he was living at the time. In the filing, Chesrown claimed $72 million in liabilities and $514,000 in assets.