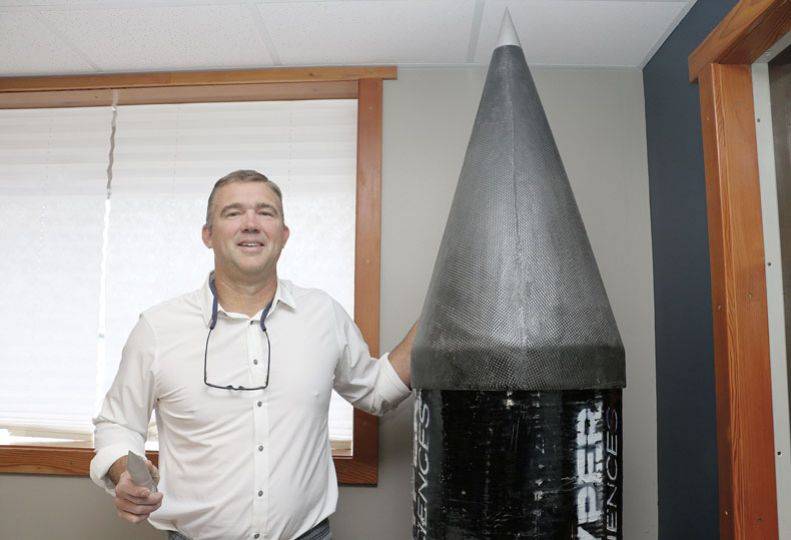 -—Mike McLean
Pipeline2Space CEO Mark Russell says the company’s current funding round will enable it to send a projectile to the edge of space.

Pipeline2Space Inc. is well-grounded in the propulsion technology that will enable it to send cargo to space on a rapid-fire basis, claims Mark Russell, CEO of the Spokane-based company, who describes himself as a third-generation miner with his eyes toward the stars.

The goal of the company is to launch projectiles carrying payloads to space repetitively at a lower cost than conventional rockets, using ram-accelerator technology developed at the University of Washington.

The Journal first published an article about Pipeline2Space a year ago, when proprietary market data platform PitchBook reported the company had raised $100,000 in venture capital.

Pipeline2Space currently has launched a $3 million fundraising effort in which it is seeking accredited investors to participate with minimum investments of $25,000, according to the investor page on its website.

The current funding round is expected to enable Pipeline2Space to launch a nearly 4-inch diameter projectile carrying an object the size of a cell phone into suborbital space, hopefully within the next year or two, he says.

“We believe we’ll be able to fly this 100-millimeter system right to the edge of space with what we’ll call ‘phone sats,’” he says.

Russell says successfully reaching suborbital space will catch the attention of the next round of investors to put the company in position to attempt another milestone—reaching full orbit—which he estimates will cost about $50 million.

Pipeline2Space hopes to outcompete conventional space service providers in coming years with a more economical platform that eventually will launch satellites about the size of a beach ball for commercial uses such as telecommunications, he says.

Russell says the company could be generating revenue in 2024.

As the ram-accelerator system currently is being lab tested, a launch starts with conventional combustion near the base of a projectile in a tube. After the projectile reaches hypersonic speed, it creates a shockwave that ignites a proprietary mixture of hydrocarbons within the tube as the projectile passes through, accelerating it to a minimum of 1.25 miles per second needed for space flight.

“Our system is a one-moving-part jet engine in a tube,” Russell says.

Russell also is the CEO of sister startup company HyperSciences Inc., which is developing uses for the ram-accelerator technology for drilling applications for hardrock mining. Russell’s hope is that the technology will replace conventional drill-and-blast techniques in mining and tunnelling.

“We spent years firing small projectiles through drill bits … but that’s same technology that can be used to get the U.S. and its allies ahead of what the Russians and the Chinese are doing on hypersonics, as well as to carry things to orbit,” Russell says.

Pipeline2Space and HyperSciences share over 4,000 square feet of space, including office space on the second floor of a building at 2311 E. Main, in East Spokane, and a test facility nearby.

“The University of Washington still does testing and development for us in Seattle, so we spend some time in Seattle, and we spend time here and testing in some of our mining operations in Idaho,” Russell says.

He says his grandfather put electricity into Bunker Hill mine. His father, Robert Russell, was mine superintendent at the Bunker Hill mine, in Kellogg, Idaho, and general manager at the Sunshine Mine, near Kellogg, before holding management and consulting positions with large mining operations in four continents.

“I grew up underground, looking at rocks, but I always had my eye to the stars,” he says.

Russell was raised in North Idaho and went to high school in Spokane. He earned his aeronautical engineering degree at Rensselaer Polytechnic Institute, in New York, and a master’s in aeronautics and astronautics engineering at Stanford University.

He worked with commercial and entrepreneurial space flight pioneers at Western Washington-based companies Boeing Co., in Seattle; Kistler Aerospace, in Kirkland; and Blue Origin, in Kent.

Russell says he doesn’t believe big rockets are the answer for delivering cargo to space.

“When you look at a rocket, it’s only that little, teeny part at the very top that ever goes to orbit or does anything,” he says. “The rest is just all the stuff that has to carry all its own fuel and oxidizer and beat gravity and beat drag.”

The aim of Pipeline2Space is to eliminate the massive first-stage rocket and replace it with smaller, easily repetitive system.

“You can deliver a lot of cargo by shooting a lot of times,” he says.