$20 million project slated to be finished in early ’22 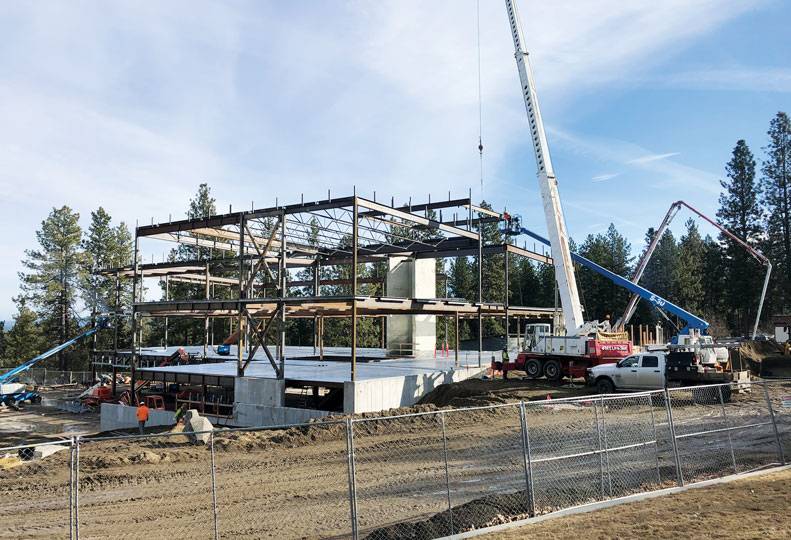 -Whitworth University
The three-level, 40,000-square-foot health sciences building is underway at the north end of the Whitworth campus.

A new health sciences building is rising at Whitworth University, and the $20 million project is on track to be completed early next year.

Formally named the Dana and David Dornslife Health Sciences Building, the three-level, 40,000-square-foot structure is being built on the north end of campus, just north of the Robinson science hall and near another longstanding science structure.

“The goal is to create a science campus within the overall campus,” says Fred Johnston, Whitworth’s director of capital projects.

The design-build team of Walker Construction Inc. and NAC Architecture, both of Spokane, is handling the project.

Whitworth’s undergraduate human performance laboratory will move into the building, as will its master’s program in athletics. In addition, the private university is creating new doctorate-level occupational therapy and physical therapy programs that will be housed in the structure.

Johnston says the school hasn’t determined yet how it will use the space that will be vacated by the programs moving into the new building.

The couple whose name will adorn the building pledged $10 million to Whitworth last December, a gift the university characterized as the largest single donation in its history.

Whitworth completed a couple of other multimillion-dollar projects last year: the $13 million Athletics Training Center and the $5 million trades and facilities building.

Beyond the health sciences building, the only other active construction project on the Whitworth campus is a nearly completed café and bookstore building, Johnston says.

Located along Hawthorne Road, on the south side of campus, the $3.1 million, 7,000-square-foot building is scheduled to be completed this spring. Food service and facilities-management company Sodexo will operate the café, and education-technology retailer Follett’s will manage the bookstore.

Walker Construction is the general contractor on that project as well, and Boise-based Accelerated designed it.