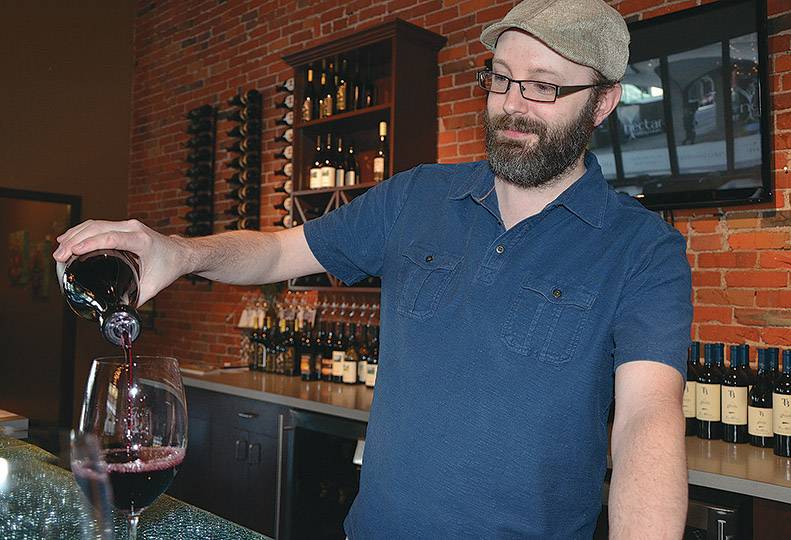 -—Judith Spitzer
Ben Simons pours wine for a customer at Nectar, one of a growing number of wine tasting rooms in downtown Spokane.

“We’re in the initial stages, and the official launch of the Cork District’s website will be spring release weekend or Mother’s day weekend, May 9, 10, 11,” he says. “There will be 33 new vintages released by local wineries that weekend.”

Washington state’s wine industry, although relatively young, is the nation’s second largest wine producer next to California, says the Washington State Wine Commission. Wine grapes are the state’s fourth-largest fruit crop, and the industry itself generates more than $3 billion to the state’s economy and employs more than 14,000 people directly and indirectly.

In 2013, Washington state saw a record grape harvest as the wine grape crush increased by 12 percent from 2012 to 210,000 tonnes (metric), says the U.S. Department of Agriculture.

“Most wineries here don’t grow their own grapes. They grow them in Walla Walla or Yakima and then ship them up here to process and make wine,” Allen says. “A lot of wineries have opened tasting rooms here because people from Seattle or Portland or wherever … fly here and then drive to the wineries in Yakima or Walla Walla. Rather than going there, people can have a great wine experience in Spokane. People don’t really know that.”

The Cork District will partner with Visit Spokane and other organizations to drive wine tourism to the city, Allen says, adding that the organization is in the process of forming strategic partnerships with hotels, airlines, and entertainment partners. So far, it has joint marketing agreements with Visit Spokane, the Spokane Wine Association, and Spokane International Airport.

“We want people to come here and go shopping, recreate, go to tasting rooms, have a unique experience, and build a great weekend. We have a unique selling opportunity here,” Allen says.

“We want to create a (distinctive) experience for both visitors and residents alike. And we’d like to capture people at conventions, families, and business travelers,” he says.

Other events and information will also be listed including travel packages, accommodations, local winery tours, restaurants, and event information.

More than 20 wineries currently are based in the Spokane area, including the long-established, midsized wineries such as Latah Creek Wine Cellars and Arbor Crest, which turn out more than 20,000 cases of wine a year, as well as smaller, boutique producers such as Nodland Cellars and V du V Winery.

Tim Nodland, who opened Nodland Cellars in 2005, says the winery produces about 800 to 900 cases per year at 11616 E. Montgomery in Spokane Valley. Nodland produces mainly Bordeaux wines that are a blend of all six Bordeaux varietals, including the seldom seen Carménère.

His passion for winemaking, and especially Bordeaux, is apparent from his ardent description of the history of it from its Roman roots to today and his vintage called Avant Garde. Nodland Cellar, now produces five different wines, and—much like other people talk about their children—Nodland says he loves all of his wines equally.

He says he is excited to be involved in the Cork District project and believes marketing the wineries and tasting rooms in the downtown area will be a boon to the industry.

In fact, he’s so enthusiastic that he plans to open a tasting room in downtown Spokane and is looking for a location.

“The Cork District is why I’m moving downtown,” Nodland says. “I want to be part of that urban renewal and all of the old buildings that are being remodeled like the Bennett block.”

He says he plans to use the Spokane Valley space now used up by the tasting room to make more wine. Nodland, who is a practicing attorney by day, has worked in a wide array of careers, including that of a singer in a rock band. His ultimate goal is to open a tasting room that will be home to a jazz club.

V du V Winery, which produce about 1,100 cases a year, is another boutique winery relatively new to the Spokane wine scene.

By this fall, they expect to produce about 2,000 cases, John Morrow says. “There is plenty of room in the winery to ramp up to 2,000 cases per year.”

Morrow says he is glad to see the Cork District coming into its own and says the marketing will be an advantage especially to smaller wineries and tasting rooms in the area.

Morrow contends there are certain challenges to being a small winery.

“We make small batches by hand, and we don’t filter our wine for this market. We self-distribute and we’re looking at getting into Idaho. We have to find someone to market and distribute there, but we think we’ve found our niche market in the Pacific Northwest,” he says.

He describes V du V wines as wine with “a lot of structure and spice, they’re rustic and have a black pepper and black currant taste that generally have a long finish,” he says.

Morrow says the winery will be releasing a red table wine called Retread Red this weekend with a little lower price tag than their average bottle and will release a new pinot noir in early June.

Most of Spokane’s downtown wineries and tasting rooms are open Thursday through Sunday, and on other days of the week in the afternoons and evenings, giving visitors an opportunity to visit several places in one day.

Josh Wade, owner of Nectar Tasting Room at 120 N. Stevens, with three employees besides himself, says he is excited by Spokane’s wine scene and thinks the Cork District will assist promotion of the wineries and tasting rooms here.

“The recession kind of derailed the growth of the wine industry here, but overall, it’s coming back,” Wade says. “The partnership with the Cork District and the city will make a big difference.” Wade says he believes there is room for another 10 tasting rooms downtown “to give it a tipping point,” he says.

Nectar Tasting Room, like several downtown tasting rooms, offers a sit-down setting for customers to order wine by the glass in a bar-like atmosphere. This year, it added a small food menu to the offerings.

“This is the first year we’ve had a food menu,” Wade says. “The menu is primarily appetizer types, although for one person it could be a meal.”