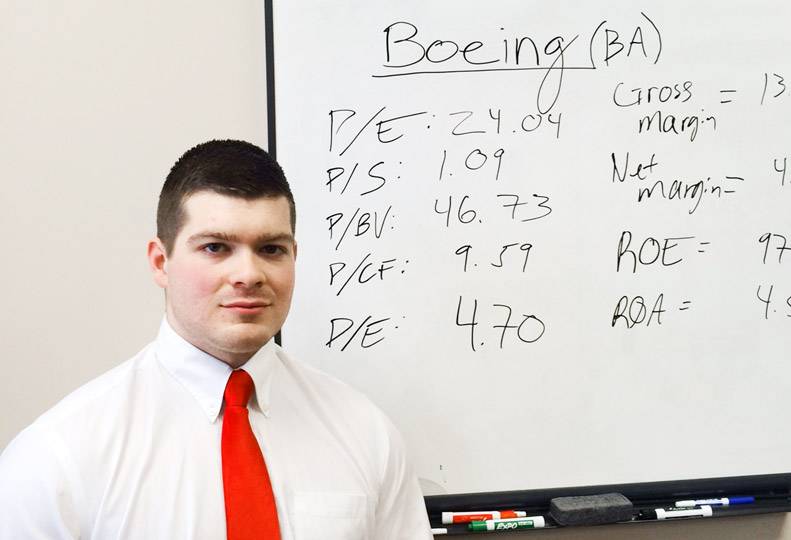 The Spokane-based stock brokerage, which Petropoulos says manages close to $100 million in assets, started the portfolio last February as an investment that focuses primarily on defense contractors.

Patriot Portfolio return on investment for 2016 came in at 24.1 percent. In the first couple of weeks of this year, the fund is beating its own performance, as well as major indices, he says.

“We have the potential removal of the U.S. from multilateral trade agreements, Brexit, Syria, North Africa, continued drug interdiction programs in South America, and the continued border difficulties with Mexico, and the proposed wall,” he says. “It’s going to be an interesting four years for sure.”

Covering mostly aerospace companies within the defense industry, the portfolio includes a smattering of companies with large, mid-sized, and small market capitalizations, ranging from General Dynamics Corp. and Raytheon Co. to the lesser known FLIR Systems Inc. and Hexcel Corp.

According to Petropoulos, the following small- and mid-cap stocks made up Patriot’s five top-performing securities for 2016: Moog Inc., Astronics Corp., Curtiss-Wright Corp., Huntington Ingalls Industries Inc., and Heico Corp. He says those companies have carved out a niche in the market, supplying the Department of Defense and other clients with laser-guided navigation systems, communication equipment, satellites, highly specialized parts like engine seals, and cybersecurity consulting in addition to bigger hardware such as unmanned aircraft and warships.

Petropoulos noted that the portfolio will be reweighted Feb. 22.

Moog and Astronics are the only small-cap stocks making the Patriot Portfolio’s top five. Moog designs, manufactures, and integrates precision motion and fluid controls for air and waterborne applications. Meanwhile, Astronics manufactures cockpit lighting, test systems, and power-generating equipment, in addition to other mission-critical systems. Both stocks have outpaced the broader markets.

Curtiss-Wright has a market capitalization of $4.3 billion making it a mid-cap stock. The company designs and manufactures computer-driven controls for the lift, flight, and landing of fighter jets and helicopters. It also makes sensors for stabilizing weapons on armored ground vehicles such as the Abrams Tank, Bradley Fighting Vehicle, as well as other weapons platforms, such as those controlling the automatic ammunition on the Stryker medium armored truck.

Huntington Ingalls is a mid-cap stock edging its way to large cap status at $8.9 billion. This company is America’s largest ship builder, providing the DoD with aircraft carriers, warships, and nuclear submarines, as well as smaller watercraft to support amphibious assault missions by Navy Seals and other service members under the Special Operations designation. In addition to building hardware for the Navy, Coast Guard, Army and Marine Corps, Huntington Ingalls provides maritime support such as maintenance, repair, logistics, and shipyard upkeep.

Heico rounds out the Patriot Portfolio’s five best-performing stocks for 2016. Designers and manufacturers of avionics and precision parts for aircraft, via its many subsidiaries like JetSeal Inc. located in Spokane Valley, Heico maintained strong earnings in 2016.

The company is a small-cap stock, at $2.1 billion, but performed extremely well last year, says Petropoulos. It’s these small and mid-cap military contractors that are agile enough in the marketplace to be well positioned for the future of warfare where unmanned machines and computers, along with a traditional boots-on-the-ground presence, will be utilized, he says. The future of the U.S. military lies in high tech, he adds.

“The small cap stocks offer great opportunity, but if they lose a contract, they feel it,” says Tim Vorpahl, Vorpahl Wing Securities’ director. “There’s great opportunity here, but we balance that with stocks that have a lower risk-reward ratio. With large-cap stocks, they’re diversified enough to take a hit and keep rolling.”

Large-cap stocks are attractive to Vorpahl and Petropoulos because of their diversification. Many of these companies export to allied nations around the world and interact with both the civilian and military transportation markets. Vorpahl says one example is Gulfstream Aerospace, manufacturer of private jets and a subsidiary of General Dynamics.

“Many of the larger companies are diversified and not solely tied to the U.S. defense budget,” he says.

Because of their research and development of high-tech battlefield equipment and new products, small-cap companies are, despite higher risk, well positioned for future earnings growth, Vorpahl says. The key is to minimize risk exposure, capitalize on value plays, and balance the portfolio, he says.

“This is not a fund to be actively traded,” Vorpahl adds. “It’s for the long-term investor.”

Primarily, because defense budgets have such long cycles and the new administration’s first proposed budget will be for 2018, the defense industry’s financial performance won’t show the full impact of the change in U.S. leadership until 2019 and beyond. The industry is well-suited for the long-term value play, says Petropoulos. Get in early and stay the course, adds Vorpahl.

Budget increases will certainly go to large-cap contractors like General Dynamics, but the mid- and small-cap companies also will get their share of contracts, Petropoulos says.

“The spending increases on both personnel and equipment makes a broad area of growth that will touch nearly every aspect of the industrial economy,” he says. “From metal fabrication to the creation of new carbon materials for planes, recapitalizing the defense infrastructure increases high-skill manufacturing jobs in the U.S. as well.”