WSU to take another run at redeveloping Jensen-Byrd building

Project is one of many envisioned, underway in University District 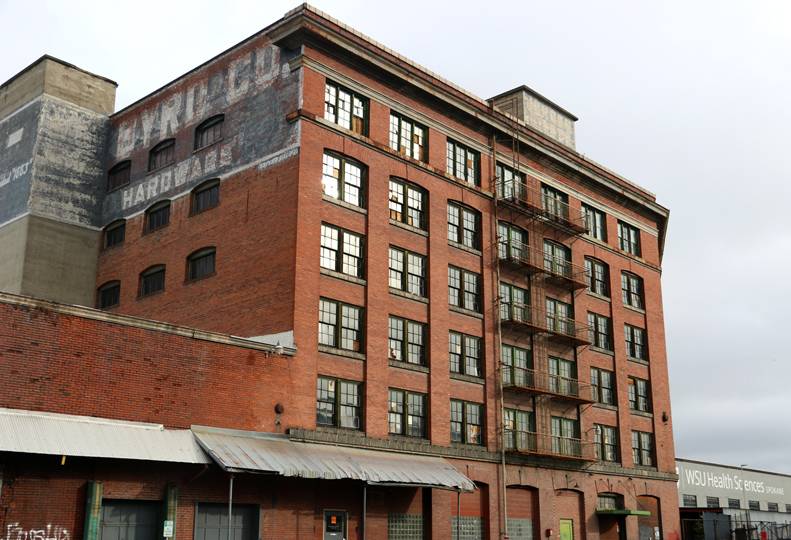 -—Natasha Nellis
The old Jensen-Byrd building has undergone four attempts at redevelopment in the past 15 years, none of which have come to fruition.

Spokane’s University District has become a hotbed of development activity with envisioned projects valued at more than $135 million on top of over $225 million in projects currently underway.

But as cranes have dominated the U District skyline, the six-story, 179,000-square-foot former Jensen-Byrd building at 131 E. Main has remained perpetually dormant.

WSU is hoping that will change in the near future.

Earlier this month, Washington State University Health Sciences said in a university-generated article that it’s in discussions to redevelop the Jensen-Byrd building into “critically needed office and collaboration space, as well as a philanthropy center.”

Darryl DeWald, chancellor for WSU Health Sciences Spokane, says the university is open to partnering with organizations that would use the space in a way that complements the health sciences programs provided by the school. That could include a child development center, a philanthropy center, or office space, he says.

“We would like to see it activated as soon as possible,” DeWald says, though he adds that no concrete plan or time line has been established for the redevelopment project.

“I think the challenge with Jensen-Byrd is that it has been difficult to retain the prior building without it costing more than it would to replace the building,” DeWald says. “We are trying to be thoughtful about our planning.”

He adds that could include retaining either the full building, a portion of it, or the façade.

The 110-year-old Jensen-Byrd building has a storied history of proposed redevelopments that were unable to get off the ground.

The warehouse was built in 1909 by Minnesota-based hardware company Marshall Wells. It sold to Jensen-Byrd in 1958. The company, now Jensen Distribution Services, maintained operations in the building until 2004, when it moved to its current location on the West Plains. The building has been vacant since then.

Cougar Properties Holdings, an arm of the nonprofit WSU Foundation, purchased the facility and properties around it in 2000 and 2001. The organization later transferred ownership to WSU.

The next attempt to redevelop the building likely will be the fifth attempt in less than 15 years.

Former plans for the building include a couple of mixed-use redevelopment concepts, including it in a Musculoskeletal Center of Excellence complex development, and demolishing the building to make way for student housing.

WSU also briefly put the building up for sale in 2011 and agreed to sell the property to a Texas-based student housing company, but the sale fell through in early 2012.

Lars Gilberts, CEO of the University District Development Association, says, “I think most of the deals have failed or haven’t restarted because of people’s self-interest. Not that they’re unconcerned about other people, but they care about one perspective more than they care about a solution sometimes.”

Gilberts adds that there has been a big push to preserve Jensen-Byrd in recent years because of its historic value, perhaps because several other older buildings in the district already have been demolished, and historic preservation advocates are wary of losing more heritage.

“If we could have gone back 10, 15 years, this might not have been the thing that we would’ve fought the hardest for, but it’s what we’ve got,” he says. “We want to turn it from a legacy of burden into something that contributes to our future that’s not just preserved, but that actually contributes, and that’s challenging.”

WSU Health Sciences Spokane is currently in predesign on a Biomedical Health and Sciences building that DeWald says will adhere to the state’s three-biennium funding process. He anticipates designing the facility during the next biennium, and breaking ground in 2023, with the building potentially to be completed in 2024.

The university received $500,000 from the state legislature in support of the predesign phase, he says. The preliminary cost estimate for the overall project is about $85 million.

WSU is currently accepting predesign applications, the deadline for which is Nov. 14.

DeWald adds that the university also is exploring funding options, including partnerships with local businesses and philanthropic partners.

The third proposed project is a Spokane Health Education and Innovation Complex that would accommodate a virtual hospital similar to one operated through the University of Kansas Medical Center in Kansas City.

“This is an environment that would provide significant opportunity for interprofessional education, where you put learners across a wide range of disciplines together and you put them in an intensive simulation environment where they learn early in their careers to do team health care delivery,” DeWald says.

DeWald says a tentative price tag of $50 million has been floated, though he says that number could change as the university develops a clearer picture of what the facility will encompass.

Of the University District, DeWald says, “Very few municipalities or states have this type of what I would call aggregation of these organizations. I think we need to move into a larger vision for what we can do.”

According to a University District Strategic Master Plan Update that was approved earlier this year, the district has a total estimated development capacity of 925 dwelling units, 441,000 square feet of commercial space, and 126,500 square feet of retail space.

Recent projects within the University District that have hit the headlines include a $60 million, 80,000-square-foot building at 840 E. Spokane Falls Blvd. that is slated to be home to the University of Washington School of Medicine-Gonzaga University Regional Health Partnership and related programs, Gonzaga’s $56.1 million Integrated Science and Engineering facility, the $10 million renovation of a new Spokane County Medical Examiner’s Office, and the South Landing Hub and Catalyst building, which together have a $100 million construction cost.