Budget of operation here has doubled since 2009 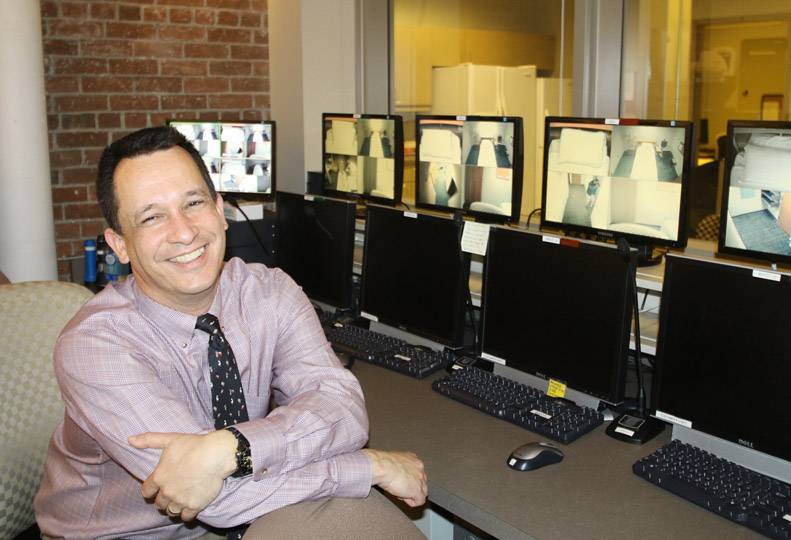 -—Kevin Blocker
Hans Van Dongen, director of Washington State University’s Sleep and Performance Center, says the center has secured more than $25 million in federal funds for research during the past decade.

In the last seven years, Washington State University’s Sleep and Performance Research Center has seen its annual budget more than double, a reflection of the growth and amount of work it now conducts at the Spokane campus east of downtown.

The sleep center started in 2004 with $4.5 million in federal funds, and by 2009, it had an annual budget of $1.5 million. Today, the center’s annual budget averages between $3 million and $4 million per year, says Hans Van Dongen, its director.

The research center is primarily commissioned to study sleep patterns and habits of a wide range of subjects. Studies are done on the effects of people who work nights, people suffering from insomnia, and those who smoke cigarettes, Van Dongen says.

The majority of test subjects—who are paid by the center from awarded grant money—respond to online and other media advertising and consent to being tested. The center then offers sleep remedies once research is conducted.

The center has grown to 50 full-time employees, the majority of whom work out of 10,000 square feet of space at the Center for Research and Clinical Simulation located at 412 E. Spokane Falls Blvd., on the backside of The Bookie, WSU Spokane’s campus bookstore.

“Because we’re staffed 24 hours a day, seven days a week, it’s a great job for students who need work hours that fit with their schedules,” he says.

The sleep and performance center on average conducts tests on 40 to 100 different subjects per year. That figure depends on the length of the tests performed. Lengthier tests on subjects can last as long as 16 days, Van Dongen says.

The sleep lab has four individual bedrooms, each with a bed and wired to capture polysomnographic recordings, or sleep readings. The majority of subjects tested are men and women between 22 and 40 years of age, Van Dongen says.

“That’s the age range that makes up the most significant population of the workforce. We also know that before and after those ages that sleep can vary greatly. So it’s best to get the widest sampling of the demographic that makes up the largest part of the population,” he says.

Van Dongen isn’t surprised by the growth and expansion he’s seen at the sleep research center.

The U.S. Surgeon General estimates insomnia costs the federal government more than $15 billion per year in health care costs. Statistics show that U.S. industry loses roughly $150 billion each year because of sleep-deprived workers based on absenteeism and lost productivity.

The National Highway Traffic Safety Administration says 100,000 vehicle accidents occur annually as a result of drowsy driving while an estimated 1,500 deaths occur each year in those crashes.

Meanwhile, a National Sleep Foundation Poll shows that 60 percent of people have driven while feeling sleepy, with 37 percent among them saying they’ve fallen asleep at the wheel.

Van Dongen says sleep is still generally misunderstood. He cites the adage attributed to Benjamin Franklin, “Early to bed and early to rise, makes a man healthy, wealthy and wise.”

But Van Dongen has the benefit of science Franklin didn’t.

He says, “Sleep’s not a virtue. It’s a necessity, and not everyone has the same biological clock.”

There’s nothing noble about rising before dawn when your body needs more sleep. Conversely, lying in bed trying to force yourself to fall asleep for the night when you aren’t tired is hardly beneficial either, Van Dongen says.

“Sleep is not discretionary, but unfortunately, we haven’t always treated it that way,” he says.

Some of the most extensive research conducted at WSU’s sleep and research center involves the effects of employees working nights, specifically those in the transportation sector, Van Dongen says.

Recently, the center studied the rule that restricted truckers to working a maximum of 60 hours in a seven-day period or 70 hours in an eight-day period and required them to take a 34-hour restart break, without working, before they begin new seven- or eight-day periods.

What WSU sleep researchers concluded was that nighttime drivers are generally more inconsistent in their job performance than daytime drivers.

“When drivers get tired, their speeds increase and they burned more gas, so there’s an economic impact that companies experience,” Van Dongen says.

He adds, “What the research also showed was that even though even both night and day drivers were off for 34 hours, for day drivers that amounted to having back-to-back nights of sleep. Thirty-four hours off for a nighttime driver only gives them one night to sleep before they’re back to work.”

The WSU research recommendation was to encourage companies to schedule their nighttime drivers in such a way that they get two nights of consecutive sleep.

“What we saw was that daytime drivers were mostly up during the day when they were off duty and sleeping at night,” he says.

Adds Van Dongen, “I like to say we’re in this split personality situation when it comes to sleep. It’s biology versus society and the economy.

“How can your workers stay alert, safe, and protect your profit margin? Our goal is to try to help the workers and companies figure this out in the real world. As a researcher, I get to be a part of these discussions,” he says.