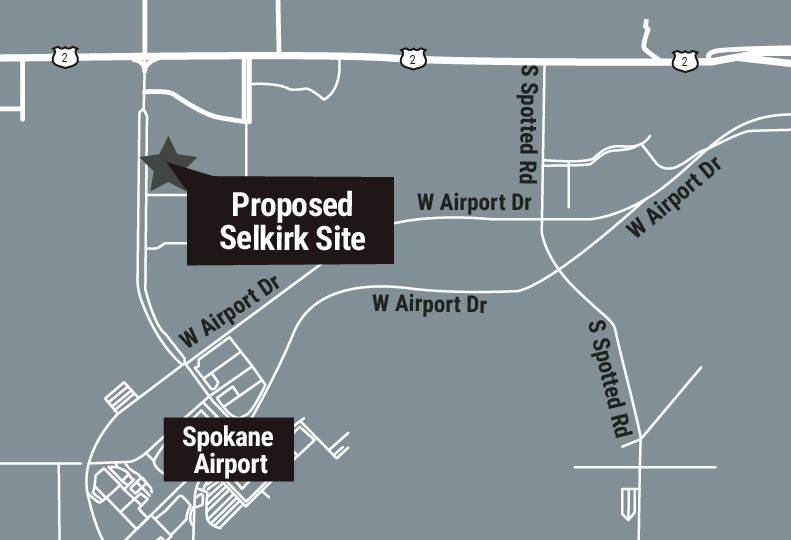 Selkirk Pharma is a contract manufacturing organization in the pharmaceutical industry that manufactures sterile drug products. It was established just over a year ago at its current headquarters at 827 W. First, in downtown Spokane.

A representative of Selkirk Pharma couldn’t be reached immediately for comment, although the company has confirmed its plans in a press release.

A predevelopment application on file with the city of Spokane indicates the company plans to build a 63,000-square-foot manufacturing facility on over 6 acres of land at 9110 W. Granite, in the southwest section of the Pacific Northwest Technology Park, across Granite from the large Northwest Farm Credit Services headquarters building.

The Pacific NW Technology Park is north of the Spokane International Airport and within the over 9,250-acre West Plains-Airport Area Public Development Authority boundary designated by the city of Spokane, Spokane County, and the Spokane International Airport. Also located in the Pacific NW Technology Park are The Hilton Gardens Inn; Spokane-based Enduris Inc., an insurance company; and the Rusty Moose restaurant.

The manufacturing processes also will be fully automated through the use of a Skan isolator and the new Skanfog technology, Selkirk Pharma says.

Skan AG is a company based in Switzerland that manufactures cleanroom equipment for the global pharmaceutical industry. Skanfog is a type of machine specifically made for working in a germ-free environment to provide efficient decontamination and assurance of sterility.

No construction timeline is disclosed; however, Selkirk Pharma says it intends to begin filling client orders by the fourth quarter of 2020.

The company also says it plans to install two additional manufacturing lines at the facility, the details for which will be announced later.

A representative of Bernardo|Wills declines to comment on the project, citing a nondisclosure agreement.

A draft site plan included with the predevelopment application shows the project would include 165 parking stalls for employees and guests with at least five Americans with Disabilities Act-compliant parking stalls. Other site improvements, such as landscaping, are planned as well.

A state environmental review, known as a SEPA checklist, also will be required before the project can move forward, according to the project plans.

Haffey also spent three years as a senior manager for Samsung BioLogistics, in Korea, before founding Selkirk with chief financial officer and director Joseph Herzog, who previously worked in a similar role for Spokane Valley-based Schroeder Business Coaching Inc., according to the site.

Selkirk Pharma says on its website that it currently is looking to fill a variety of positions for roles including engineering, manufacturing, project management, microbiological quality control, and administration.