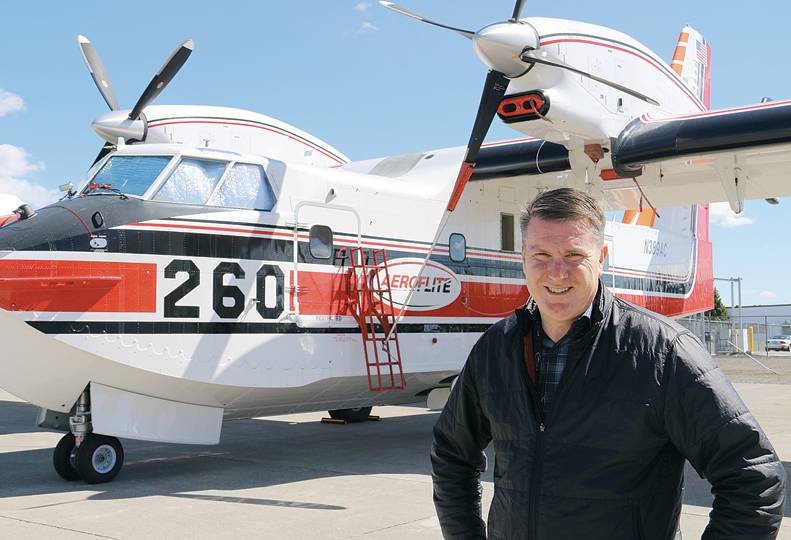 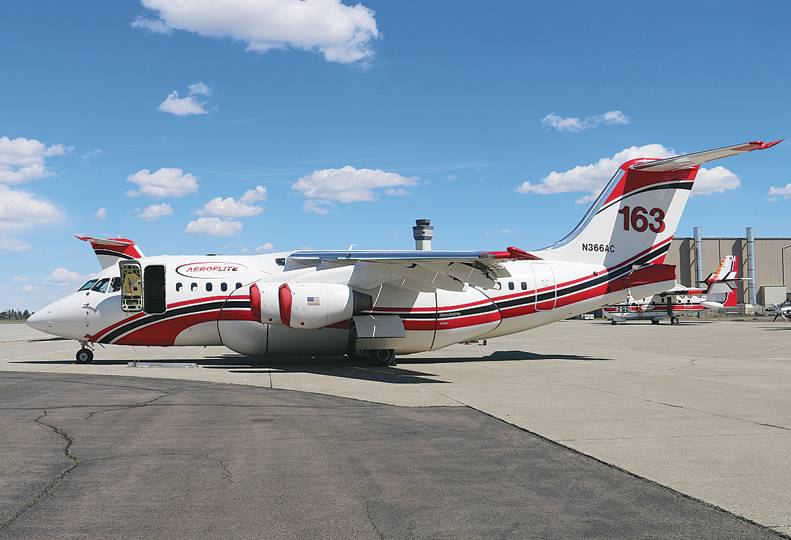 -—LeAnn Bjerken
Aero-Flite currently operates six Avro RJ85s, which can carry up to 3,000 pounds of fire retardant in a tank under their wings.

With the start of wildfire season looming, Shane Sullivan, general manager for Spokane-based aerial firefighting company Aero-Flite Inc., says his focus is on ensuring the company’s planes and support crews are prepared.

“Last year’s wildfire season was very busy, so coming into this one, we’re once again concentrating on being ready,” he says.

Aero-Flite is a private operator of aerial tankers that provides contract aircraft and crews to the U.S. Forest Service for fighting wildfires. Through the National Interagency Coordination Center, which is the national support center for wildland firefighting, Aero-Flite also can support other county, state, and federal agencies.

Located at 8520 W. Electric, just south of Spokane International Airport, the 60,000-square-foot facility is a former Air National Guard hangar, which is owned by the airport and leased to Aero-Flite.  About 31,600 square feet of the building is hangar space, while the remaining 27,000 square feet is used for offices, storage, and workshop areas.

Sullivan says the company has seen significant growth since coming to Spokane, most of which has been driven by the service it’s able to provide, as well as the growing number of wildfires each year.

“Prior to coming to Spokane, we had about 40 employees and a handful of aircraft,” he says. “Today, we have about 150 employees and 10 planes in our fleet.”

In fact, he says the company has seen enough continuing growth that it’s on the verge of outgrowing its current hangar space.

“I have been in discussions with the (West Plains-Airport Area) Public Development Authority about the potential for a second hangar space, but nothing is official yet,” he says.

Sullivan says Aero-Flite’s tanker fleet currently includes four Viking CL-415s and six  Avro RJ85s. The CL-415 is an amphibious aircraft, which is able to land on nearby lakes, and pick up water that it then uses to put out fires. Meanwhile, the RJ85 is a British aircraft that’s been converted to carry flame retardant in a tank that’s wrapped around the plane under its wings.

“It’s a bit easier to visualize the RJ85s, if you picture the plane itself as a hotdog, and the tank as a bun that wraps around its middle,” he says.

Sullivan says the CL-415 can carry around 1,600 gallons of water, and its tanks can be refilled in 12 seconds, making it an efficient firefighting tool. Meanwhile, the RJ85 can carry 3,000 gallons of retardant, has a top speed of about 477 miles per hour, and is fully pressurized for high altitude, long-distance dispatches.

Aero-Flite’s operations team can track plane locations and fuel usage, and direct them to locations where they can land to meet ground trucks for resupply of fuel or retardants.

“With wildfire seasons becoming longer and more intense, we’re in the process of building more RJ85 tankers to meet that demand,” Sullivan says. “We have six now, and a seventh will be delivered sometime early this summer.”

He says Conair also has developed a new airtanker called the Q400MR that is capable of delivering retardant, foam, or water for fighting fires.

“The MR stands for multirole,” he says. “This is a tanker that was designed for use by the French government in firefighting, and transport of disaster recovery personnel and supplies. We’re looking into whether there’s interest in North America for the Q400s.”

Last year, Aero-Flite made the Journal’s list of Best Places to Work in the Inland Northwest, placing eighth among medium-sized companies.

“Our mission is ultimately bigger than all of us, because the work we do helps to protect people, property, and the environment,” he says. “Many of our employees are really proud to work here because of that aspect.”

“In this industry, pilots get a lot of the attention, but nothing comes together without the hard work of all our other support staff,” says Sullivan, who is a former fighter pilot and has been with Aero-Flite for almost two years.

Aero-Flite is committed to providing a high level of training and resources to its employees, including discussions on leadership, teamwork, and safety.

“We talk a lot about how important it is to debrief after a mission and analyze what worked well or didn’t,” he says. “Safety is also a primary focus for us, because we work in some challenging environments and we want to ensure everyone is able to complete their work effectively and come back safe.”

In recent years, Sullivan says, Aero-Flite has also made efforts to coordinate practice training for its aerial crews with those of ground firefighters.

“It was important to us to be able to allow these groups to practice interacting and communicating with each other,” he says.

“We’ve been lucky in attracting skilled mechanics, probably because we’re able to offer them good benefits and a positive company culture,” he says. “We’ve had many employees join us from other organizations, because they’ve heard through word-of-mouth that we’re a good place to work.”

He says the company often finds it more challenging to find employees to fill its pilot and truck driver positions.

“It’s challenging to attract pilots, mostly because big airlines can offer them better pay,” he says. “Our advantage is that we can offer a more rewarding job experience, because when they fly for us, they’re part of a mission with tangible results.”

“Truck drivers are another challenge to hire, just because much of the work is seasonal and they spend a lot of time on the road,” he says.

Looking ahead, Sullivan says the company plans to add to its revenue growth through new contracts and will continue to pursue innovative technologies and training models for its staff.

“We want to continue to be as well-prepared as we can,” he says. “Our success so far has allowed our parent company Conair to re-invest in our facilities and our planes, which is an excellent position for us to be in.”

Aero-Flite measures its growth by the number of contracts it holds with customers, as those contracts directly influence how many aerial tankers it needs in the field, as well as the number of employees it needs to support those aircraft.

He says the company currently has four exclusive-use contracts with the Forest Service, and the rest of its aircraft are available for call-when-needed contracts with federal or state governments, depending on need.

“My preference would be to have as many exclusive use contracts as we can, because that’s a guarantee of work for the year, whereas call-when-needed contracts don’t have that guarantee.”

Sullivan says it’s difficult to judge the severity of wildfire seasons as there are several factors to consider, including the number of fires that occur, the amount of acreage burned, the amount of property damage caused, and the number of human casualties that resulted.

“Those measurements make it hard to agree on how severe a season was,” he says. “It’s almost equally hard to predict how bad a season will be, because it all depends on weather patterns, precipitation, heat, and potential ignition sources.”

Sullivan says lightning is a common ignition source for wildfires, as are many unintentional, man-made ignitions such as unattended campfires, burning debris, equipment use and malfunctions, and discarded cigarettes.

“We have some modeling technologies that can try to predict which areas are most at risk for wildfire activity, but there are still many factors you can’t account for,” he says.

“A typical wildfire season runs from May through September,” he says. “This wildfire season seems to be slower to start than last year, but once things start to dry out that could change quickly.”

According to Sullivan, the 2017 wildfire season ended in late December, and tankers were already being sent out again by January for the start of the 2018 season.

Sullivan says Aero-Flite has two planes out in the field already on exclusive use contracts and will add more as maintenance requirements are completed and the aircraft begin their contracted-use dates.

He says Aero-Flite’s availability rates for planes is high, meaning its staff is able to keep the majority of its aircraft in peak condition and ready for contracted use at any time.

Sullivan says the company was founded in 1963 and started operating converted Boeing B-17 bombers, Douglas C-54 Skymasters, and Douglas DC-4 airliners, along with Canadair CL-215 scoopers.

“In the early 2000s, we moved away from operating converted military aircraft and into operating what we call the next-generation tankers, or the RJs,” he says. “At that time, there had been some industry issues with accidents, so all of our standards were updated for better safety, operations, and maintenance. Today, we’re actually quite heavily regulated.”

In 2014, the company moved its operations to its current Spokane base from Kingman, Arizona