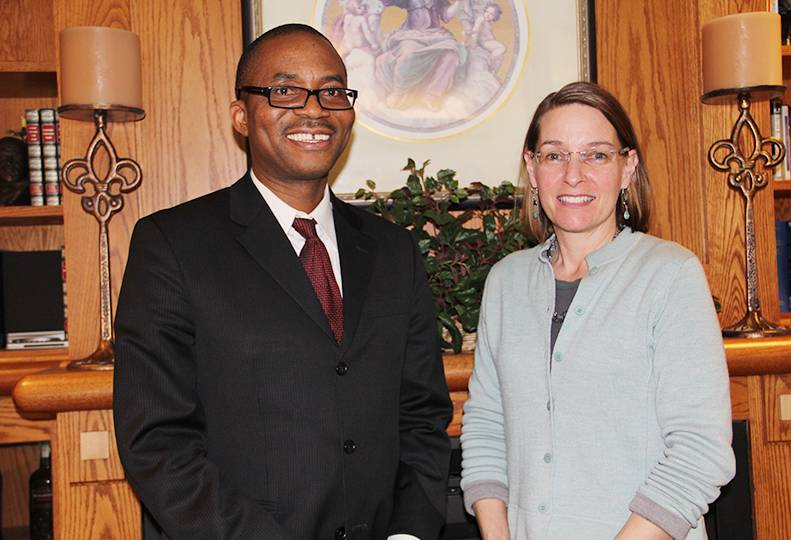 An assistant public defender with the city of Spokane and a Gonzaga University School of Law professor are striving to educate refugees and immigrants about the American legal system, something many of them have distrust for because of corruption and persecution in their home countries.

Francis Adewale, the assistant public defender, and Megan Ballard, the professor, planned and helped facilitate the first American Law and Justice Workshop for Refugees here last October. It was held in conjunction with local nonprofit organization Refugee Connections Spokane, Gonzaga Law School faculty and students, and Community Colleges of Spokane, which funded and hosted the event.

About 150 recent refugees and immigrants from Community College of Spokane’s English-as-a-second language classes, representing approximately 18 countries and at least ten languages, attended the workshop, Ballard says. The conference was free of charge to participants. Community Colleges provided 10 interpreters for the event and transportation for the attendees.

Refugee Connections Spokane, for which Adewale serves as board chairman and Ballard is a volunteer, provides assistance to refugees through participatory programs, activities, and events. Examples of such projects and events include resource workshops, language testing assistance, and the Patient Passport project, which provides a medical records booklet for refugees to bring to a hospital or doctor’s office. It also helps connect refugees here with legal services.

Adewale says that the idea for the conference came from his own experience of immigrating to Spokane 15 years ago from Nigeria.  Rather than immigrating as a refugee, Adewale came to the U.S. through a Visa lottery program through which his name was selected.

Refugees, he says, usually are housed in camps in a country neighboring the one they fled due to issues such as war, religious or political persecution, and human rights abuse. From there, the United Nations decides what country the refugee goes to; the refugee often doesn’t know where he or she will end up, Adewale says. As a result, the refugees often experience a significant cultural disconnect, which can lead to legal issues.

The conference had two main goals, Ballard says. The first was to introduce refugees to the legal system and help them feel less intimidated by it, as many of them had negative experiences with law enforcement officials in their own countries. The second goal was to zero in on certain areas of American law that refugees tend to have trouble with, such as bribery, Ballard says.

“That’s the way that some business is handled in a lot of the world, but it’s illegal here,” she says.

Ballard says the conference also focused on the issues of domestic violence, laws related to children, and alcohol and drug abuse. Some crimes involving those issues can be classified as crimes of moral turpitude, she says, which means a refugee could face deportation if convicted.

“It’s something that the United States law considers morally reprehensible; a person’s intent is irrelevant,” she says.

Since becoming a public defender here, Adewale says he has seen many refugees being charged with crimes they don’t understand because they haven’t been educated about how the legal system here works.

“They’re carrying the baggage of their countries, but what is morally right and justified where they come from may not be considered right by American law,” Adewale says.

Ballard says the idea that even law enforcement is held accountable to the law here can be a new concept for refugees, as many come from countries rife with corruption.

“Even those who create laws have to follow the law,” she says.

Adewale agrees, saying, “This is a completely new concept to most refugees. In Nigeria, police don’t follow the law; here, everybody is made to follow the law. Even if an officer gives me a ticket, I can have my lawyer question the officer.”

Another legal obstacle refugees and immigrants face is understanding the domestic violence laws here, Adewale says, which can vary greatly from the refugee’s country of origin.

“Explaining the domestic violence law to refugees is very complicated,” he says. “It can be very traumatic.”

Along with explaining what the domestic violence laws here are, Ballard says the conference also focused on encouraging refugees to contact police if they find themselves victims of abuse.

“Some may not recognize they are victims, because they don’t understand that the behavior is illegal here; they don’t recognize abuse, and they may have a lack of trust in the police,” she says. “We tried to address both sides of the issue. The other part of it is that it’s nuanced; you can be guilty of domestic violence here without ever touching someone. Things like stalking, phone harassment, violations of no contact orders—there’s a lot to communicate there.”

Ballard says, however, that the goal isn’t to justify domestic violence in refugee households, but rather to educate them about the family law system here.

“The point isn’t to excuse domestic violence, but sometimes there are cultural misunderstandings about what constitutes illegality within a family,” she says.

Many of the challenges that refugees face here are made worse by the language barrier, Adewale says, particularly when police are interacting with refugees who don’t speak English and may have experienced police brutality in their native communities.

Adewale says that in his first five years working as an attorney here, many refugees who were arrested had a resisting arrest charge added on, possibly from the language barrier or from not understanding how the arrest process works here.

Ballard says part of the message of the conference was to empower refugees to ask for an interpreter while dealing with law enforcement.

Adewale and Ballard say they are looking to make the conference not only an annual event, but also to expand the workshop into other areas of law, such as debt, landlord-tenant, and family law.

Landlord-tenant laws are an area where refugees are particularly vulnerable, they both say.

“There are some inscrutable landlords here taking advantage of refugees,” Ballard asserts.

She says that the two recognize that landlord-tenant issues go beyond just refugees, with the potential for many underprivileged groups to be taken advantage of. However, other groups may not face the same large language and cultural barriers, she says.

“Refugees are one subset of Spokanites with unmet legal needs,” Ballard says. “My choice to work with refugees is because of the huge resettlement hurdles they face. Others have unmet legal needs, but they might not be compounded by past trauma, language barriers, and post-traumatic stress disorder.”

Many older refugees also aren’t aware of the law here as it relates to health care, she says, such as having living wills or advanced directives.

For the next conference, which is planned for October 2014, she and Adewale are looking to secure more funding not only to have more topics, but also to provide materials in more languages. A survey distributed to the participants after the first conference showed that they wanted more topics and more materials in different languages.

Ballard says they would also like to expand the participation of the Gonzaga law school students who volunteered to help at the conference, something she says teaches students an essential lesson.

“We’re trying to introduce law students to the needs of the community here,” she says. “Lawyers have a duty to help fulfill the community’s unmet needs.”

Ballard and Adewale say they also would like to have the next conference include an educational section for law enforcement officers, aimed at helping officers communicate better with refugees.

“We also discovered a potential gap with 911 services for people who can’t speak English,” Ballard says.

“Refugees come from all over; the common thread is the persecution that brought them to this country,” he says. “We want them to connect and learn from each other.”

When refugees come to Spokane, their first stop is often World Relief Spokane, the local humanitarian assistance arm of the National Association of Evangelicals. World Relief provides refugees with assistance for resettlement, obtaining licensing, Social Security, and other benefits.

It also coordinates English-as-a-second-language classes through Community Colleges of Spokane, which refugees must take to receive benefits, Adewale says. The workshop’s participants were students in those classes.

Adewale says his ultimate goal is to create positive experiences for refugees here like he had when he first came to Spokane.

However, he says that many refugees end up leaving the area for larger refugee communities in bigger cities.

“When I first got to Spokane, a few people went to great effort to make me comfortable,” he says. “Not every refugee had those opportunities that I had. It used to be that refugees spend two or three months here and then move. We discovered it’s not that open-handed to them.”