Banking on the move 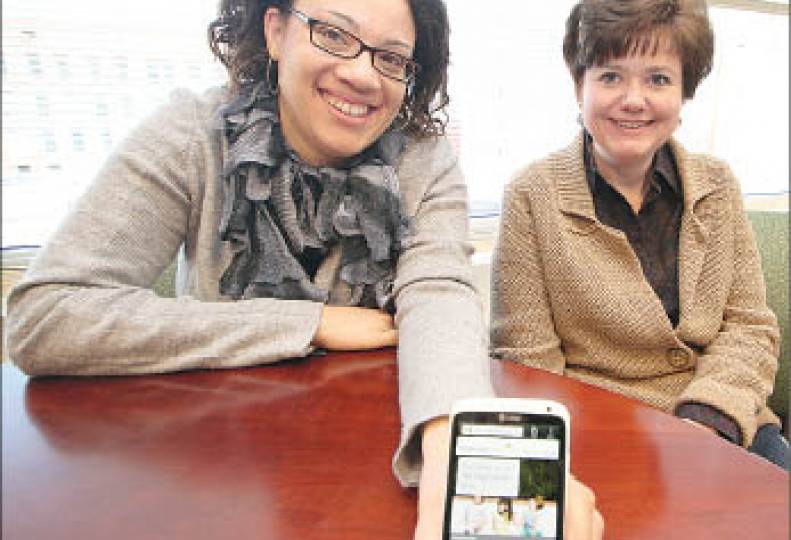 Sterling Bank, Spokane Teachers Credit Union, and AmericanWest Bank are among institutions that plan to roll out mobile-banking apps, although they say some of their online services already are smartphone accessible through their websites. Mountain West Bank deployed a mobile app last June through which customers can access bank services as simply as selecting an icon on their smartphone screen.

In 2011 alone, Sterling saw a 240 percent increase in customers accessing online services via their smartphones, Roberts says, adding that about 30 percent of all of Sterling's customers have accessed the online site via smartphones.

"People are just getting accustomed to doing everything on a phone," Roberts says. "This is a way to have banking at your fingertips at all times."

While the majority of those customers are between 18 and 44 years old, mobile banking also is being adopted by a growing number of baby boomers, she says.

Sterling boosted its mobile-accessible services when it launched its new website earlier this year as part of its rebranding campaign, says Patricia Baughman, a Sterling senior vice president and director of product management and market research.

"Focusing on mobile features will position Sterling to appeal to a younger demographic and deepen existing relationships with customers," Baughman says. "We're working on giving a consistent experience online via computer, tablet, or mobile phone."

One mobile-banking feature available now that's quickly becoming a favorite is the option to receive alerts via text message when account balances drop to a preset threshold.

Currently, the mobile-optimized site is basically the online service formatted to fit a phone screen.

"Everything is there," Baughman says. "But if there are too many choices, it gets cluttered."

When Sterling does launch its mobile app, it will make it easier to check balances and conduct monetary transactions, she says.

"Streamlined information is what the mobile customer is looking for," she says. "The app will include features like 'push to call' so you don't have to take the extra step to talk to a bank representative."

Baughman says she expects future adopters will use mobile banking features as a first preference.

"In a way, mobile technology is replacing online technology," she says.

The development of dedicated mobile features is being driven by customers, and not by fees, Baughman says.

Roberts adds, "Mobile banking doesn't add to fees by itself." Some services are offered on a per-use basis such as a stop payment, but such on-demand services have fees regardless of the mode of interacting with the bank, she says.

The main difference between the app and the mobile browser version is that the app allows access to banking services through an icon on the phone, while the browser requires access through a Web page similar to logging in through a personal computer. The browser vision of online banking goes to a link that's formatted to fit their phone, Rogers says.

Customers typically use the mobile app to pay bills, check account balances, and transfer funds between accounts. The application also has a branch and ATM locator as well, she says.

Business applications include cash-management services that enable business owners and managers to approve payroll or wire transfers through the mobile application, Rogers says.

More mobile services are on the way, she says.

"Within the next 90 to 120 days we'll also have the capability to make check deposits using the camera on their phones," Rogers says. "I know things will start evolving as the product gets out there."

Caillouet says more than half of STCU's 110,000 members use the credit union's online services.

"We've had communications with members who want a mobile app," she says. "We're also reading some trends and seeing more of a move toward mobile apps."

The initial rollout of the app will include the ability for members to pay bills through mobile devices in addition to viewing account balances and transferring funds, she says.

"We're also looking at budgeting and savings-goals features," Caillouet says, "We want to make sure our members see the benefit."

She says younger members and working professionals are driving the demand for dedicated mobile services.

Currently, some professionals who travel a lot are using online services through smartphones and tablet devices.

The app will offer uses that appeal to small-business owners and managers, Caillouet says. Business features will include the ability to set up multiple users with different permissions, such as for approving bill payments.

"We're in the process of finalizing the features list," she says. "We want to make sure go out with right tools and not just put something out there."

STCU also will be able to add to its mobile services. "We've selected a product we can build on," Caillouet says. "That's part of our criteria of getting a new mobile app."

"We've always thought new technology would replace old, but members just seem to use them all," she says, noting that the credit union opened its 15th branch earlier this year in Spokane Valley and plans to open another branch on the South Hill before year-end.

Spokane-based AmericanWest Bank doesn't offer full mobile-banking services yet, but it's working on it, says Kelly McPhee, the bank's director of communications.

"We have it on our horizon, but not firm enough to give a timeline," she says.

While AmericanWest offers online banking services, it's not a simple task to make them accessible by an Internet-capable phone, she says.

"There's a misconception that mobile banking is online banking that's on the phone," she says. "Mobile banking requires a whole new system. For community banks, that's quite an investment."

Online banking is continuing to evolve, though, and includes some hybrid components customers can use in a mobile fashion, McPhee says.