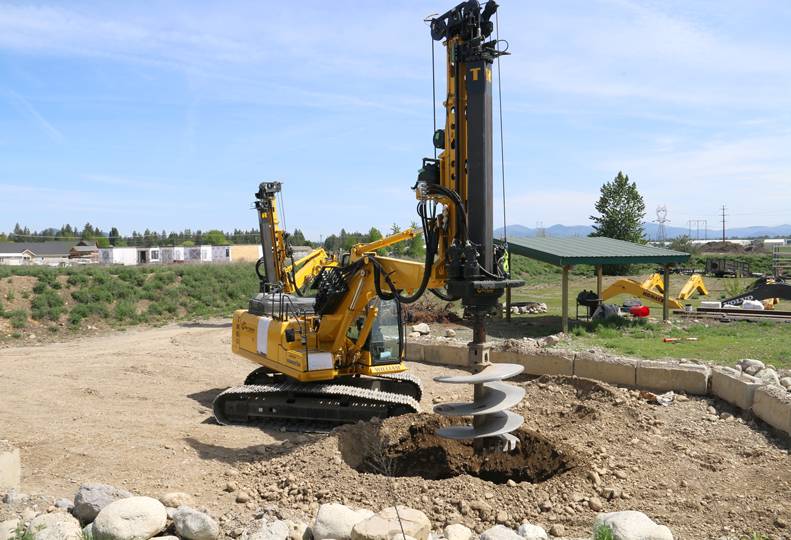 -—LeAnn Bjerken
Founded in 1978 in the San Francisco area, Bay Shore Systems moved its operations to North Idaho in 1996.

Executives with Rathdrum-based foundation drilling equipment manufacturer Bay Shore Systems Inc. say the company is planning for more growth, as it works to expand its sales networks both nationally and internationally.

Bay Shore’s President Adam Minatre and Chief Financial Officer Karl Patchin say the company has been working toward becoming a $50 million operation by 2025.

“Last year, we did about $35 million in revenue, so we’re about two years ahead of our planned growth schedule,” says Minatre. “This year has been slower, so we likely won’t meet our projections, but we’re still on track to reach a total that’s similar to last year.”

Founded in the San Francisco Bay area in 1978 by Adam’s father, Herb Minatre, Bay Shore Systems manufactures foundation drilling equipment such as excavator-mounted drills for construction of the foundations of homes and commercial buildings. The company moved to North Idaho in 1996.

Foundation drilling involves drilling a hole of a specified depth and diameter, placing some type of configuration of rebar in the hole, and then filling it with concrete.

While Bay Shore sells most of its drills to subcontractors who specialize in drilling, Minatre says general contractors are also customers, including Post Falls-based Mountain Power Construction Co. and Garco Construction Inc., of Spokane.

“The type of work we do depends on how big of a market we have,” he says. “However, the largest portion of our business, probably around 40%, is for the powerline industry.”

Because the powerline industry is one of Bay Shore’s biggest clients, Patchin says the company has been facing some challenges in finding a consistent revenue stream.

“We have to balance the size of the rigs we’re producing to match demand,” he says. “And in recent years we’ve been doing more medium to small sized rigs, while we wait to see what the demand for larger rigs is.”

Patchin explains that powerline based clients generally want larger machines, which take time to produce, and powerline projects can take several years from planning and investment to design and completion. So, when there’s a decline in powerline projects Bay Shore builds more medium sized machines which are used by specialty subcontractors for private projects.

Minatre says 2019 saw a slow start with orders, which has also made revenue, planning, inventory control and other factors a challenge.

Torque refers to the drill’s twisting force, which is measured in foot pounds, or the amount of turning force applied to move one pound a distance of one foot around an axis at a radius of one foot.

Minatre says that last year Bay Shore made 69 drills, and this year the company had forecast for a total of 81. “It’s been a bit slower this year, so we might not make that,” he says.

Minatre says Bay Shore’s Idaho facility can manufacture up to 100 drills a year.

“We expect to reach that maximum capacity in the next five years,” he says.

Bay Shore is headquartered in a 40,000-square-foot building at 14206 N. Ohio, that includes both production and office space for its 100 employees.

Patchin says the company made its first expansion outside of Idaho in January by establishing a new service center in London, Kentucky.

“We chose Kentucky, because it was one of the few areas with a facility big enough to meet our needs,” he says. “It’s also a central location where some major highways come together, which is an aspect we’re hoping will enable us to better serve our customers in the Midwest and on the East Coast.”

Patchin says the company completed its first installation there in March.

“We have two employees there now but hope to ramp up to a full staff of about 10 soon,” he says.

Minatre says the Kentucky service center also has easy access to manufacturers that supply materials and excavators or trucks that are needed for the final installation of drilling equipment.

“We still build drill attachments in Idaho, but now we can send them to Kentucky for final installation, which helps to reduce shipping costs for customers,” he says. “Doing a full installation here requires a lot of resources and floor space, so being able to take some of that out of our main facility allows us to focus more on just building attachments.”

Minatre says the company’s closest direct competitor is Fort Worth, Texas-based Watson Inc., but its biggest competitor in the industry is Bauer AG, in Germany.

“Watson is our nearest competitor but it’s only about two-thirds of our size, whereas Bauer is a big company with close to $2 billion in revenues,” he says.

In addition to its domestic clients, Bay Shore Systems also exports drilling equipment to customers in the United Kingdom and other European countries, as well as Australia, New Zealand, Africa, and the Middle East.

Minatre says the company continues to work on increasing its presence in international markets but has struggled to find buyers as the dollar is stronger in comparison to other national currencies.

“Customers also want to be able to rent a rig and try it out, so we’re working to get more machines on the ground to generate interest, and a stronger sales force to increase purchases,” he says.

Looking ahead, Minatre says Bay Shore is currently working on developing its next breakthrough drilling product.

“We’re in the process of figuring out what our next big product will be,” he says. “But we hope to have something ready for the ConExpo this coming March.”

ConExpo-Con/Agg is held every three years in Las Vegas and is one of the largest construction trade shows in North America.

As the company grows, it’s also keeping an eye on the current workforce shortage and is working with the International Association of Foundation Drilling to try to promote careers in drill operation and manufacturing, Minatre says.

“We realize that many of the industry’s drill operators and machinists will be reaching retirement in the next 10 years, and there aren’t as many new grads to replace them,” he says. “So, we’re looking at offering training opportunities for students, as well as ways we might be able to make our machines more autonomous. If our machines could be operated remotely, that could cut down on the number of operators needed.”

Minatre says Bay Shore also has been working to ramp up its employee development program, the Great Game of Business.

The program is based on the book of the same name by businessman Jack Stack, which outlines how he revived his dying company using open-book management, an approach whereby employees are provided with company financial information to enable them to make better business decisions.

“We’d tried starting this type of program a few different times over the years,” Minatre says. “But once I took over as president in 2016, we really committed to it, and we wouldn’t be where we are today without that commitment.”

Minatre says he started by taking his executive team to a Great Game of Business seminar and hired a coach to keep the company on task in training its employees. The company even started a book club to keep employees engaged in discussion and understanding of business topics.

Patchin says the program has made a big difference in the level of understanding employees have about how the business operates and their role in supporting it.

“Rather than simply presenting the information, we’ve invested in helping employees understand it,” he says. “Now they can see why the company is making the decisions it’s making, how those decisions impact their work and what they can do to contribute to our success.”