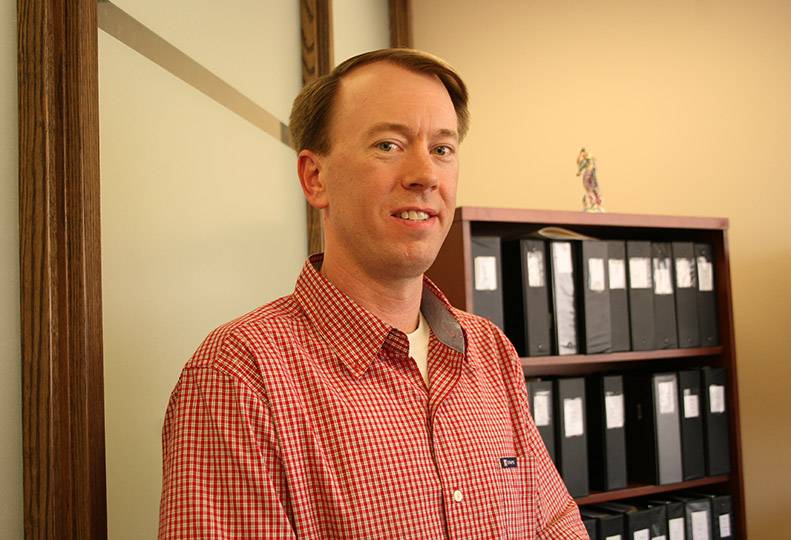 -—Staff photo by Jessica Valencia
Erick West, who bought the forensic economics company earlier this year, says its caseload has been increasing by 8 percent to 10 percent annually.

Spokane's Erick West has worked in forensics for the past decade, although he doesn't spend his days on crime scenes or scanning fingerprints.

The company underwent a name and ownership change in January that coincided with West succeeding President Daniel J. Harper, who has transitioned into an "of counsel" role at the company. West has been with the company for 10 1/2 years, and prior to stepping in as president, he had been a senior economist there since starting.

"I was very fortunate to get on with Harper Inc. and learn from Dan Harper," West says.

Forensic economics is a field that focuses on calculating damages and losses for individuals and businesses in civil lawsuits.

West says his caseload at the company has increased between 8 percent and 10 percent each year since he started, and West anticipates that growth rate will continue. He attributes that increase to taking more commercial cases, or cases involving businesses, which typically involve more research, as well as more personal cases or cases involving individuals. He says forensic economics and forensic accounting, which typically employs a certified public accountant instead of an economist, have shown increases industrywide.

West Harper operates out of a 1,000-square-foot office on the eighth floor of the Chase Financial Center downtown, at 601 W. Main.

We do "independent analysis of whatever damages are being claimed," West says, adding that all of the work it does involves litigation.

West says he's worked on more than 700 cases since joining the company, adding that not all cases make it to trial, with a vast majority being settled outside the courtroom. He estimates 15 percent of the cases he's worked have gone to trial or deposition.

"Everything is prepared as if it's going to trial, but a small percentage actually goes to trial," West says.

In addition to West, the company has a part-time office manager. He says although it only has two employees currently, he plans to hire an additional employee within a year. Harper, who has transitioned to part time, is entering retirement and is working on closing the remaining active cases he has, West says.

He says it's contracted by either a defendant or plaintiff, and West Harper determines a suggested amount for damages based on research it conducts. He says that research is based on the type of case, but can include financial records, interviews with people involved in the case, and employment files.

He says caseloads are split evenly between working for both sides, although not at the same time.

Personal information such as employment history might be used in a malpractice case where someone is seriously injured to help determine how much they would have made if they had been able to continue to work, for example.

"If someone's permanently injured, here's what they could have earned. Now they don't," West says.

The company charges an hourly rate for its services, he says, although he declines to disclose the rate, and payment of its fee isn't contingent on the outcome of the case. He says commercial cases typically involve going through more documentation than a personal case, making them more time consuming.

"If you're looking at all the different aspects of a business versus an individual, you're probably going to be more complex," West says.

The rest of those handled by the company are commercial, which can include damages accrued through extended forced closure of a business or fraud.

"All the cases are so unique and different," West says. "I've enjoyed the challenge of investigating these cases."

West says the company typically works on cases with damages that are expected to exceed $100,000.

He says not all court cases use a damages expert, particularly those that involve anticipated damages of less than $50,000. He says parties involved in larger cases typically use the services of a company like West Harper to add credibility to a claim.

He estimates he's worked with more than 400 attorneys since joining the company. He says West Harper garners business through existing relationships with attorneys and through referrals.

He says the company typically will take on six or seven new cases a month.

West says he has 70 active cases, adding that the company typically takes between one and three months to write up a report from the time it is hired to evaluate damages. That timeline can fluctuate depending on legal deadlines, he says.

"In the field of litigation, you never know what'll come up," he says.

Harper founded the company in 1993 as Harper Inc., doing business downtown. Prior to starting Harper Inc., Harper, a certified public accountant, was president and CEO of McFarland & Alton PS, of Spokane, where he worked for almost 10 years in numerous roles. He received a Master of Business Administration from University of Washington in 2003.

The company moved into its current space in 1998, originally operating in 2,000 square feet before paring back to its current size. He says being located downtown is a benefit for the company because it's within walking distance of many law offices it works with.

West, originally from Spokane, received both his bachelor's degree and master's degree from Washington State University, graduating with a master's in economics in 2000. Prior to working with the company, West was previously employed with Merrill Lynch Wealth Management, of Spokane.