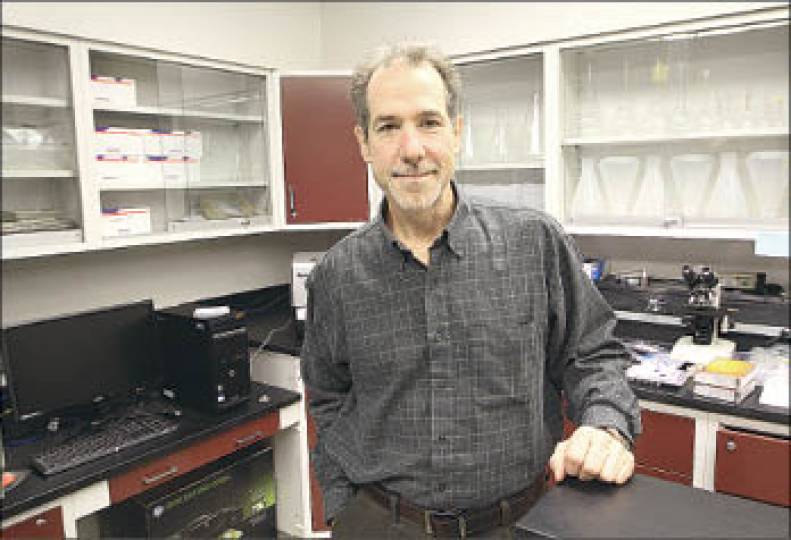 -—Staff photo by Linn Parish
Iasis Molecular Sciences founder and CEO David Vachon says the company has received $4.5 million in grants since the company's inception in 2007.

Iasis Molecular Sciences LLC, a Spokane-based pharmaceutical-medical device company, is moving ahead with the early stages of research on two new innovations after landing National Institutes of Health grants worth a total of about $645,000.

The larger of the two grants, a $345,000 award, is for research involved in developing a new antimicrobial hernia repair mesh. The other, at almost $300,000, will be used to develop an ointment to treat diabetic wound infections.

David Vachon, the company's founder and CEO, says that with the two new awards, the company now has received $4.5 million in grants since its inception in 2007.

The company doesn't have any products that are generating revenue yet, but Vachon says, "Clearly, somebody likes what we're doing."

Iasis will use both grants to conduct what it calls phase one testing, which involves testing the products' efficacy and toxicity at a cell level in a lab, and then, if results are favorable, testing the products on rodents. The initial testing will be conducted at Iasis' laboratories in the Innovate Washington building, at 665 N. Riverpoint Blvd., on the Riverpoint campus. Rodent testing would be conducted elsewhere, outside of the Spokane area.

The antimicrobial hernia repair mesh Iasis has developed involves taking a mesh that currently is used in hernia repair and placing into it an active infection-fighting pharmaceutical.

"What we envision is a synthetic device that can be used in an infected field," Vachon says.

He says more than 750,000 hernia repairs are performed in the U.S. each year, and in many cases, mesh material is placed in a patient's abdomen during hernia surgery to provide support to the abdominal wall.

In cases in which a hernia patient develops an infection—something Vachon says is common with obese patients or other large patients in which a large swath of mesh must be used—the material must be taken out.

In such situat-ions, mesh is usually replaced with a biologically absorbable material that slowly degrades over time and isn't susceptible to infection. That material, however, is about 10 times more expensive than the mesh it replaces, Vachon says.

In theory, he says, the antimicrobial mesh that Iasis is developing could be used prophylactically during the initial surgery in patients who might be prone to infection, or it could be used to replace standard mesh after an infection has developed.

Using a grant it received in March from the Health Sciences and Services Authority of Spokane County, Iasis had completed some preliminary research on the medication-laced mesh.

That early testing, Vachon says, "has shown that the new implant is well-tolerated and can be formulated to be effective against a variety of relevant pathogens."

Iasis is partnering with the University of Connecticut Health Center, in Farmington, Conn., on the first phase of research, which is expected to take a year to complete.

All phases of testing could be completed in two years, if all goes well, Vachon says. As research progresses, he says the company will have to decide whether to try to take the product to market on its own or partner with a larger company that either would buy the technology outright or license it.

The pharmaceutical used in the antimicrobial mesh is part of a family of antimicrobials Iasis developed that are used to address infection and inflammation. That chemistry and the know-how to formulate it into products, he says, are the company's primary assets.

The other product for which the company received a grant, the diabetic wound ointment, isn't based on Iasis's chemistry, but rather is based on a formulation developed by its partners at the University of Akron, the Akron Research Commercialization Corp., and Virginia Commonwealth University.

Vachon says diabetics often sustain injuries on their feet for a variety of reasons, and those diabetic foot ulcers can become infected easily and lead to osteomyelitis, or bone infection. Such infections typically are what lead to amputation, which can start with the need to remove a toe, then an entire foot, then an entire leg.

The most common treatment for the wounds is debridement, a surgical procedure that involves removing dead or infected tissue so that the neighboring healthy tissue stands a better chance of not being affected.

Few salves or topical products are used on foot ulcers, he says.

"We don't expect anything but excellent results with this," he says. "It's an elegantly simple new technology."

If effective, the ointment Iasis is developing could alleviate some of the heavy cost burden on the health care system that foot ulcers and amputations create.

"The idea, of course, is to save human lives," Vachon says.

Like the hernia mesh, the ointment is a product that Iasis and its partners will look into taking to market itself or selling or licensing to a larger company that would commercialize it.

Iasis, which is a Greek suffix that loosely means "medical condition," employs five people at the Spokane lab.