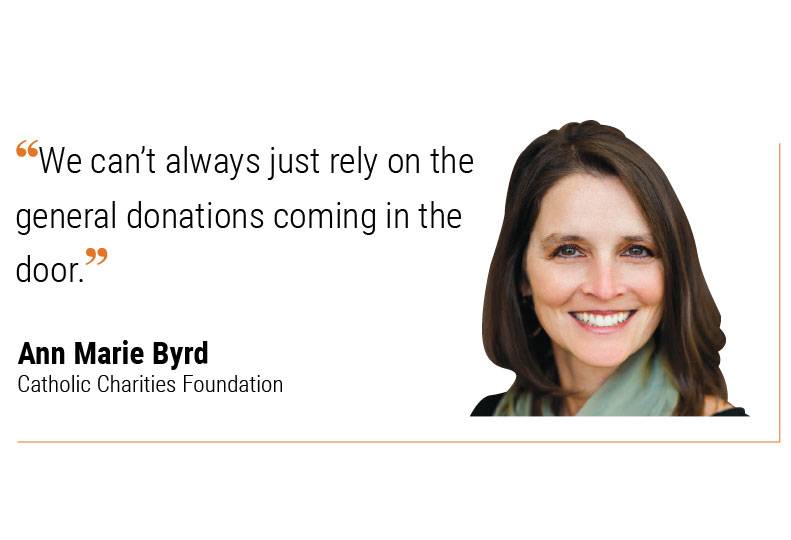 Planned giving is expected to increase in the coming years, and Spokane-area nonprofits are ramping up efforts to draw in long-term donors.

The U.S. is barreling toward the largest wealth transfer in history, with baby boomers expected to transfer trillions of dollars to the next generation within the next 25 years, and nonprofits are getting in on the ground level to ensure that they are on the minds of potential donors as they consider what to include in their wills.

Ann Marie Byrd, executive director of the Catholic Charities Foundation, in Spokane, says she has seen a significant increase in people reaching out to the organization with the intent to leave a gift in their wills.

“Generally, most planned gifts are bequests,” she says, however, the organization also sees donations left through life-insurance policies and personal-property gifts, such as homes or vacation houses.

Planned giving involves charitable gifts of cash, equity, or property a donor can make while living or upon death. The most common type of planned giving is a bequest, according to a study by the Indiana University Lilly Family School of Philanthropy. A bequest is a gift made through a will or a living trust and is usually either a set amount of money or a percentage of an estate.

Byrd says, “We’ve been preparing for it as it has increased,” by enhancing communications with donors to ensure that a planned gift is at the top of their minds, either through weekly newsletters and email blasts, or through thank-you correspondence sent out after a donation is received.

“We have one line at the very bottom of the page that says, ‘Please consider Catholic Charities in your planned giving or financial plans for the future,’ so that it’s top of the mind,” says Byrd.

According to the annual Planned Giving Report compiled by online will provider FreeWill, 70% of Americans don’t have an up-to-date will.

FreeWill claims it has assisted in writing over 160,000 wills, resulting in more than $1.6 billion in planned gift commitments to nonprofits in three years, with an average gift size of $60,000.

According to FreeWill, the number of wills made through the site in March increased 163% compared with the year-earlier month, while a Gallup poll has estimated 25% of individuals hope to increase charitable giving this year.

“For the future of our agency, we can’t always just rely on the general donations coming in the door,” says Byrd. “We need to rely on the interest made from these large gifts that are given to our foundation in order to sustain the programs that we have now serving the public.”

According to a Gallup poll published last May, only 73% of Americans surveyed said they had donated to a charitable cause within the last year, the lowest charitable giving has been since 2009, when the low was 79% of Americans donating.

The poll notes that while the pandemic was likely a big factor in the drop, the decline in charitable activity also could be attributed to the changes in tax laws in 2017, which raised the federal income-tax standard deduction threshold and removed the tax benefits of giving to nonprofits, in many instances.

Megan Lewis, of Spokane-based Megan Lewis Law PLLC, estimates the number of clients seeking to create wills through the firm increased between 10% to 15% in 2020 over the previous year.

“Business has always been pretty strong, but definitely when the first shutdown came up, we had more calls, especially medical professionals and essential workers calling to get their things in order,” Lewis says.

She adds, “There’s more heightened awareness and a feeling of immediacy.”

However, the pandemic has made some clients more hesitant to meet in person to review and sign wills, so a number of new wills have been placed on hold, she adds.

Lewis says gifts left to charities through wills or estates have ranged between $1,000 and the 10s of thousands of dollars. Some have even donated upward of $3 million.

Frequently, clients come in with a plan for specific nonprofits they wish to leave funds to, adds Lewis.

“The vast majority of people have already decided that’s a goal for them,” she says.

Currently, the law firm has over 60 open cases, a number of which involve planned giving, she says.

Gwen Schwartz, director of ministry advancement and legacy giving with Union Gospel Mission, says the average legacy gift has ranged between $150,000 and $200,000 over the last three years.

“Two years ago, UGM began an active campaign to connect with our longtime donors via a survey process,” she says. “In the past two years, we have doubled the number of known legacy gifts through this collaboration.”

Schwartz says the nonprofit’s advancement team has increased focus on working with UGM’s current ministry partners over the last three years to educate members on ways they can continue donating to UGM through their estate plans, along with connecting with members about their passion for the nonprofit.

Looking forward, Schwartz says she expects to see estate giving increase over the next 30 years in tandem with the wealth transfer.

“UGM will continue to actively invite ministry partners into deeper conversations as they desire,” she says. “We also will continue to assist them with trusted resources, online will tools, and additional assistance as needed.”

That sentiment is shared by both Lewis and Byrd.

Lewis says, “I think people are aware of a lot of good that the various charities are doing in the community, and it’s top of mind for people when they come in to plan.”