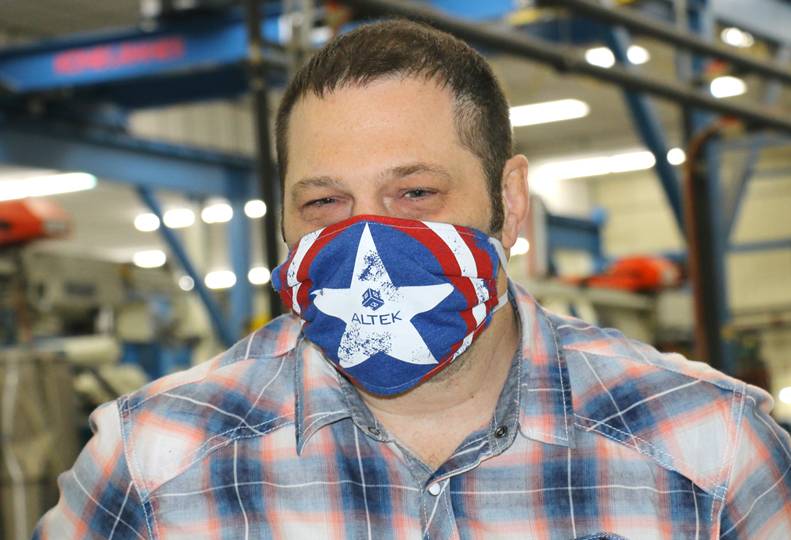 Spokane-area manufacturers that serve the aerospace industry say they’re staying aloft for now and feeling somewhat optimistic about the long term, even as new orders for aircraft and components have taken a nosedive.

At Liberty Lake-based custom injection molding maker Altek Inc., President Mike Marzetta says he’s seen a slowdown in the aerospace sector, which makes up about 50% of Altek’s orders. Altek, a tier-two supplier, hasn’t received new aerospace orders in the past few weeks, but none of its customers have cancelled their orders.

“We definitely saw a ripple of our customers’ orders, including Boeing’s, getting pushed out when they announced the plant closures,” Marzetta says.

Marzetta says the other portions of the business, which serve the medical and communications sectors, haven’t taken a hit.

The masks likely will be finished this month, if filter material can be purchased soon. Marzetta says supply-chain issues and high demand have made the material difficult to find.

Marzetta also says Altek has a large ventilator project “on the hook but not in the boat,” but declines to reveal more.

At Spokane Valley-based electronic circuitry board manufacturer Servatron Inc., aerospace orders represent about 20% of business, says President Tod Byers. As much as 50% of aerospace accounts could be lost by the end of the year, Byers says.

Most of Servatron’s aerospace customers are sub-tier manufacturers for Boeing, meaning they either provide parts directly to Boeing or manufacture smaller parts that go to companies higher up the supply chain.

“Our customers, the sub-tier suppliers, are still what I’d call furloughed and delayed,” Byers says. “We anticipate ongoing (postponements) and cancellation of orders for a while. I think it’s going to be some time before we see a positive impact from Boeing starting back up.”

Like Altek, Servatron is seeing an increase in demand from other industries, especially health care.

“Other business segments, mainly around health care, are going crazy,” Byers says. “We’re tied into things such as respirators, defibrillators--things that are really mission critical.”

The increase in business from other sectors could offset some of the losses from the aerospace sector, he says. Demand from those sectors could increase Servatron’s employment in the next couple of weeks, but Byers says the long-term employment outlook at Servatron is murky.

“The longer the COVID-19 situation continues and with the restrictions the state is putting on us, it’s going to have an impact in terms of our head count,” Byers says. “As things become clearer, we’re seeing that the second half of the year there’s going to be a reduction in business. We’ll have to do what we need to do to make sure we’re making money and surviving.”

Byers says he’s not looking at layoffs yet and will try to find other ways to reallocate resources if Servatron continues to lose business, but the situation seems to change each day.

“This has probably been the most uncertain time in 20-plus years of trying to predict what the business is going to do,” Byers says.

Post Falls-based ATC Manufacturing Inc. and other Boing suppliers have received a formal notification from Boeing that asks them to stop making and shipping new parts and to move all completed projects out within four weeks of Boeing’s shutdown, says David Leach, ATC director of business development.

Leach says that while slowdowns and cancellations create anxiety in the short term, he’s more concerned with Altek’s long-term outlook as it relates to Boeing.

“For us, what’s probably more important for the long term is not necessarily the four-week delay and essentially a month of business that we’re going to lose this year, but where the build rates will be for aircraft, in particular the Boeing aircraft, when they come out of this,” Leach says. “A very large proportion of our business is Boeing related.”

On April 29, Boeing reported a first-quarter loss of $641 million and a 26% decrease in revenue.

“To align the business for the new market reality, Boeing is taking several actions that include reducing commercial airplane production rates,” the company said in a press release.

Leach says Altek had been watching closely to see what Boeing would order in terms of the midsized widebody 787 jetliner and the larger 777, the two Boeing aircraft for which Altek supplies composites.

“In some ways, the news was not as bad as we thought it might have been,” Leach says.

Boeing decided to decrease gradually its production of the 787 to 10 per month from 14 per month over the remainder of 2020 and will reduce production to seven per month by 2022.

“Seven’s not great, but the situation over the next 18 months or so looks like it may be not quite as bad as we had anticipated,” Leach says.

Leach’s attitude is buoyed by the likelihood that Boeing will release a new aircraft within the next year or two, a move at least partially spurred by the grounding of the 737 Max following two fatal accidents.

“There had been a lot of discussion about that before COVID-19 hit,” Leach says. “It’s pretty clear Boeing is going to need a new aircraft. That aircraft is almost certainly going to have a large composites content in it. We believe the medium- to long-term is still very good for aerospace and very good for ATC as a fabricator of composite structures.”

Dean Cameron, owner and publisher of the industry news magazine Northwest Aerospace News, says he believes that companies that are involved in producing aerospace components for companies outside of the U.S. are still doing well, as are companies that serve the U.S. military.

However, Cameron contends that most manufacturers will survive the downturn.

Meantime, manufacturers here are making up for the lack of aerospace work by keeping employees occupied with other tasks.

At ATC, Leach says employees have been working to build up a small stock of parts.

“From the point of view of running certain batch sizes of products, even if we don’t have demand for a full batch, it still makes sense to manufacture the batch at one time and put the rest into storage in the interim,” Leach says.

Employees at Altek are taking advantage of the slowdown in aerospace manufacturing to practice lean manufacturing through tasks such as reorganizing work areas to maximize efficiency.

“If there’s any downtime, we can put them to work on lean projects, which you never seem to have time to do when you’re behind schedule, which we have been for the past two or three years,” Marzetta says. “Now that we’ve got a little bit of breathing room, we’re able to refine systems.”