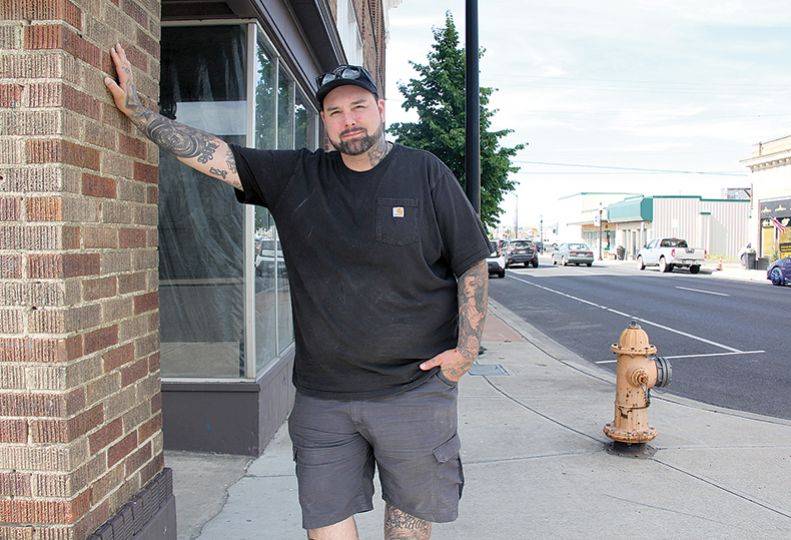 -—Virginia Thomas
Aaron Fiorini plans to open the Bison Bar and other amenities in the old Masonic Temple early next year.

A 30,000-square-foot building in northeast Spokane’s Hillyard neighborhood formerly used as a Masonic Temple is undergoing a makeover to become a restaurant, bar, and events center.

Aaron Fiorini, owner of Market Street Pizza, bought the building at 5201 N. Market with his wife, Angel, in January for $909,000. The structure will host three businesses, Fiorini says.

An 8,000-square-foot bar, restaurant, and events space to be called Bison Bar will occupy the first floor.

Fiorini says a wall on the first floor has been demolished to enlarge the future Bison Bar space. He says he plans to complete about $500,000 in renovations, including installing rolling overhead doors, building an open kitchen, and building booths and a stage on the first floor. The 91-year-old building’s electrical systems and plumbing will be updated.

He says he’s acting as contractor on the renovations.

Fiorini says he aims to create a London-pub-meets-Western-saloon atmosphere and an American gastropub menu. “I’m trying to go with something that’s different for Spokane—and definitely different for Hillyard,” Fiorini says. He’s been gathering antique furniture and fixtures for the space, including a 132-year-old, 42-foot-long bar from a pharmacy in Ellensburg, Washington.

Chef Jordan Obermeyer, who also handles the menus at Remedy Kitchen & Tavern, on the South Hill, and at Liberty Lake meadery Emrys Fermentations, will oversee a menu that will include traditional handhelds, such as burgers and sandwiches. Fiorini hasn’t yet hired a mixologist but says craft cocktails will be a focus of Bison Bar.

Fiorini says the name Bison Bar refers to the building’s size—the American bison is the largest land animal in North America, and the building is the tallest on the block.

“I’m going to try to get away with doing a hidden wall and having a hidden bar,” he says. “We’ll see if the city allows me to do that. Everything’s about fire exits.”

The second and third floors will be dedicated to a 15,000-square-foot events space called Hill House Event Center for larger occasions such as weddings. The events space will be named for James Hill, the Great Northern Railroad magnate and Hillyard namesake.

In April, Fiorini bought the former The Riff bar space at 5209 N. Market, a 670-square-foot space adjoining the restaurant and events building.

“It was originally a barber shop and a shoe repair shop in the early 1900s,” Fiorini says of the smaller space. “We’re going to turn it into an old-school soda fountain.”

Ice cream supplied to the soda fountain will be made in the kitchen of Bison Bar, Fiorini says.

Due to permitting delays, Fiorini says he’s not certain when Bison Bar will be ready for customers, but he’s hoping for a grand opening in January.

“I was shooting for August because Hillyard Days would have been a good time to open up, but it’s not going to happen,” he says.

Fiorini, who was born and raised in the Hillyard neighborhood, says the space previously was occupied by an arcade. In prior years, the building was home to a local Masonic lodge; a stained-glass Masonic logo remains intact on the south side of the building. Originally, the structure was built to house Bergen’s Mercantile.