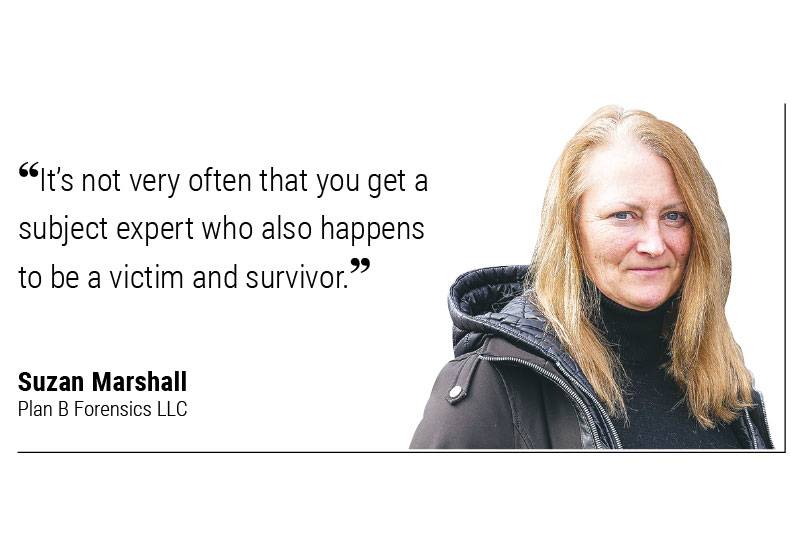 Dr. Suzan Marshall says she didn't expect death to become her work. In fact, she had spent years working as a surgeon, trying to save the living.

Now, she applies both her medical background and her personal experience with traumatic death to her work as a death investigator. Marshall owns Plan B Forensics LLC, a death investigation company based in Spokane that works on cases throughout the U.S.

As a medicolegal death investigator, Marshall reviews evidence from cases in which someone has died suspiciously, including autopsy reports, medical records, and death investigation reports from medical examiners. Often, she works to find evidence that others have overlooked.

Marshall currently is involved in a double homicide case that has gone to trial, in which she's reviewing evidence and communicating frequently with the lead attorney for the defense.

"I provide the details that haven't been flushed out before," Marshall says. "Death investigation encompasses the study of body, history, and scene. My reports are really thorough. We use maps. We use timelines. We use tons of images."

Marshall says attorneys hire Plan B Forensics to review evidence, the findings of which are brought before a judge in criminal cases. Billing rates vary on the agency hiring Plan B, but Marshall says a case review typically costs $1,200. A full investigation in the lead-up to a trial costs about $5,000. If Marshall is requested to appear in court to testify as an expert witness, she charges $750 per hour spent in the courtroom.

Because the COVID-19 pandemic has slowed the criminal justice system, Marshall says she's worked fewer cases over the past couple of years. However, Marshall says her phone is ringing more often as more people become aware of the company and its services.

In addition to a double homicide, Marshall also is working on a case of alleged child abuse in which an 18-month-old died. Marshall says she doesn't believe the child was abused, based on her knowledge of blunt trauma and how it can appear on a live person hours after it occurs, and appear to be something else entirely in a dead person.

What appeared to be bruises are actually a condition called disseminated intravascular coagulation, caused by injuries the child received from falling down a flight of stairs, she contends.

In death investigation work, her prior medical experience is vital, she says.

"When I review the hospital records, I've been there, I've done that. I've taken care of these people," she says.

Marshall says she's aware of one other surgeon-turned-medicolegal investigator in the U.S.

"It's really hard to convince an attorney that they need to hire a doctor, she says. "We don't have clinical physicians in the courtroom. We just don't. We're busy."

Marshall is part of an expert witness database for cases in the U.S. She frequently handles cases originating in states such as South Dakota, Indiana, and Utah.

Marshall met her husband, John Marshall, in an organic chemistry class, and the two wound up attending the Philadelphia College of Osteopathic Medicine, where they started dating.

Both were in the Army. John had joined after a stint with the Marine Corp, while Suzan was seeking a way to pay for medical school.

During medical school, the two spontaneously got married on a spring break camping trip.

Suzan became trauma chief and chief surgery resident in Harrisburg, Pennsylvania, while John became a surgical resident in York, Pennsylvania. John deployed to Afghanistan for a year, and the couple later reunited in Seoul, South Korea, where they served together as Army surgeons for four years and adopted two children.

In 2009, the Marshalls moved to Washington state.

"We just wanted to come to the Northwest," Marshall says. "We'd never lived here. We'd lived pretty much everywhere else."

Marshall worked as general surgeon at Pullman Regional Hospital before she resigned due to a health issue. In Spokane, she started teaching, then became a medical consultant for veterans.

John Marshall was chief of surgery at Mann-Grandstaff VA Medical Center, in Spokane. On Jan. 26, 2016, he went missing. His body was later pulled from the Spokane River. His death was ruled an accidental drowning. However, Suzan Marshall believes John was murdered, and the perpetrator managed to cover up the crime.

"There's so much hard evidence that this is a disguised homicide, and they just dismiss it," Marshall contends.

However, the official conclusion by law enforcement that John Marshall died of accidental drowning stands.

"Because (John's) case was so publicized, and I had to do so much work that the police didn't, I had families contacting me," Marshall says. "Ted Pulver, my PI, kept saying to me, you need to hang a shingle. He was kind of my career counselor."

Marshall began working as an advocate for victims of violent crimes, then enrolled in and passed a medicolegal death investigator course and exam, as well as the certification exam. In April 2019, she co-founded Plan B Forensics with Heather Ostby, who has a health care administration background and is working toward a death investigation certification. Plan B is entirely cloud-based, so Marshall says she and Ostby typically work from home.

"It's not very often that you get a subject expert who also happens to be a victim and survivor," Marshall says. "I think it makes my job really difficult, because I have PTSD, so I trigger all the time. A lot of it is managing that."

Lack of cooperation between law enforcement and death investigators is the greatest problem in the medicolegal field, Marshall says.

"In their mind, police are a family. Anybody who's not police, you're not family," Marshall asserts. "They don't share with you. They don't work with you. They find the person dead, and if it's not homicide, it's case closed. The trouble is that there are a lot of hidden homicides."

Marshall says she wants to see more training for lead detectives who are assigned to investigate suspicious, violent, and unexpected deaths.

"If we can do more training and develop more standard protocols, it would make the police's job much easier. It would streamline their job," she says.

Marshall says private death investigators can help law enforcement to confirm more quickly the cause and manner of deaths, leading to faster arrests.

"You need the people with the most expertise at the beginning, because you lose evidence," Marshall says. "If you miss how and why the person died, you're going to go off in the wrong direction, and that's how we get wrongful convictions. When you convict someone, you're destroying their life and their family, so you sure better make sure it's the right person."

Marshall says her medical experiences and literature background help her communicate effectively with juries, attorneys, and family members of victims.

"The way I was trained in medical school and the way I was trained in writing is very much about how you explain something succinctly and at a level that people can understand," Marshall says. "You're constantly explaining something really difficult—cancer, trauma, bad critical care—to a family who's in shock and may not be well-educated. You have to be able to get the point across, and also not have them take it out on you."

She says she learned a great deal from observing her father, who was a surgeon.

"My father taught me how to give bad news," Marshall says. "I would watch him give people horrendous news, and they would be relieved. Not knowing is terrifying."