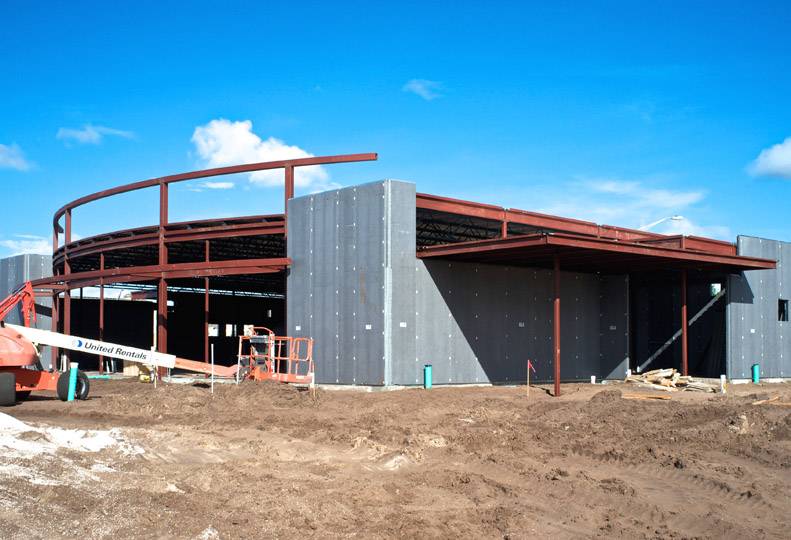 -—tekR
This Florida convenience store project provides an example of how tekR’s wall system can be used. TekR has switched the insulation material in its wall systems, therby increasing its R-value. 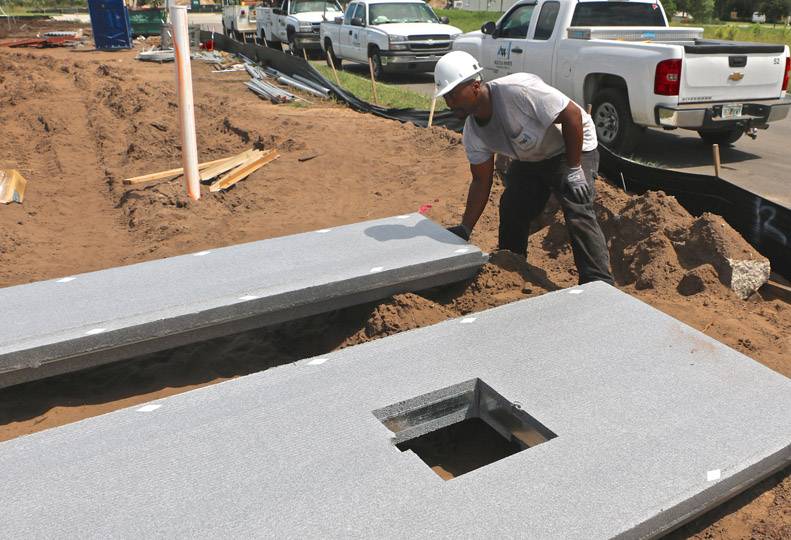 -—tekR
A crew of four workers can install 750 to 1,000 square feet of wall per hour, TekR says. The panels weigh about 2 1/2 pounds per square foot, reducing the need for material-lifting equipment.

TekR, a Post Falls-based manufacturer of energy-efficient wall panels that fit together on a construction job site like Lego pieces, says it has enhanced its products by switching to an insulation material that offers even greater thermal performance.

The company produces what it calls the Structural Insulated Thermal Envelop System, which it markets as a more energy-efficient and quicker-construction alternative to conventional stud, block, or tilt-up walls. The patented system consists of a 20-gauge galvanized steel core molded into expanded polystyrene insulation and engineered to each project’s specifications.

TekR has enhanced the system by switching from a standard expanded polystyrene insulation to a patented product called Neopor Rigid Thermal Insulation—made by big German conglomerate BASF—that increases the R-value of its products by nearly 20 percent.

R-value is a measure of resistance to the flow of heat through a given thickness of a material, with higher numbers indicating better insulating properties.

“By switching to Neopor, tekR has raised the thermal-performance bar, providing whole wall R-values ranging from R28.3 to R56.7 that put us in a class by ourselves,” asserts Werner Nennecker, the company’s CEO and founder.

The Neopor graphite polystyrene that tekR now is using in its products has a distinctive silver-gray color that comes from high-purity graphite contained within the polymer, Nennecker says. The graphite particles both reflect and absorb radian energy, thereby increasing the material’s insulating capacity, he says.

He says he expects the switch to the new insulating material to position the company well to meet increasingly stringent regulations for energy efficiency in new structures.

“That’s what we’re capitalizing on,” and that’s what the company expects to propel its sales growth in the years to come, even more than just the gradually improving economy coming out of the Great Recession, Nennecker says.

“The main emphasis we are seeing is building codes change to where conventional (building) technologies are having a difficult time meeting codes,” he says.

TekR occupies about 20,000 square feet of leased space at 708 S. Clearwater Loop in the Riverbend Commerce Park, on the south side of Interstate 90 near the Idaho-Washington state line. It employs seven people there, including three in its manufacturing plant, and has three other employees working from offices in Virginia.

Of the small number of workers at its plant, he says, “We’ve become very, very efficient. Our manufacturing process is extreme lean.”

Despite that tiny workforce, tekR says it has supplied its panelized building system for more than 500 projects throughout the U.S. and in Canada, Central America, and elsewhere abroad. The company ships at least half of its total annual production east of the Mississippi River, Nennecker says. It works with private, commercial, institutional, and government customers, on structures ranging from convenience stores, restaurants and other retail structures to churches and medical buildings.

It was scheduled to ship some of its products last week to Bozeman, Mont., for a school project there, and also is working on a project for a medical-marijuana growing facility in Las Vegas, Nennecker says.

One of the most highly visible projects here in which its wall system was used, he says, was the big Life Center Foursquare Church, at 1202 N. Government Way, which was completed in 2005 and for which James W. Elmer Construction Co., of Spokane, was the general contractor.

Nennecker declines to talk specifically about the company’s annual sales, but says its plant currently has the capacity to generate about $20 million worth of wall system products per year, and he adds that “certain months we could hit our limit.”

TekR is strictly a designer and manufacturer of projects, using its proprietary building system, so it doesn’t work as a contractor or subcontractor. Instead, it delivers all of the wall panels, fasteners, and other components needed for a particular job to the construction site, and then trains the builder’s workers on how to install them.

“There’s nothing left to do on the job site but assemble the building,” Nennecker says. “In essence, we are a single-step substitution for steel or wood studs, structural sheathing, and insulation. We replace those in a single part.”

A crew of four can install 750 to 1,000 square feet of wall per hour, which is several times faster than a conventional stud wall and even faster than building concrete block walls, he claims. Plus, the panels are light, weighing only about 2 1/2 pounds per square foot, reducing or eliminating the need for material-lifting equipment, he says. Material costs are higher than for conventional construction, but the faster construction time and the enhanced energy efficiency can more than offset those higher costs, he asserts.

“We’re all about speed and energy. That’s the guts of what we do,” he says.

Another advantage of the Structural Insulation Thermal Envelop System, Nennecker claims, is that there is zero waste on the construction site, aside from the pallets that the project materials come loaded on, compared with around 20 percent waste on a typical job site using conventional construction methods.

TekR claims its system provides a better barrier against air flow, moisture infiltration, noise transmission, and energy loss than conventional block, tilt, or stud walls. It says its system accepts all interior and exterior finishes and coverings, and has gone through extensive structural and fire testing by accredited third-party labs.

One way is when it’s specified on a project, and it collaborates with the project architect early on, Nennecker says.

“We get the drawings and then we help value-engineer it,” he says, adding, “They (the customers) end up with basically a Lego set (delivered to the construction site).”

The other way it works on projects is through direct corporate accounts with companies such as Gate Petroleum that use its system regularly, he says.

All of the materials needed for a basic convenience store with around 5,000 square feet of wall space can be delivered in a single semitruck load, Nennecker says. One of tekR’s larger projects involved construction a medical facility in in Nome, Alaska, that required 65 truckloads of its products, he says, adding, “Seven truckloads is about average.”

TekR was started by a small group of architects and engineers out of a garage in Post Falls, and did business originally under the name of Acsys, short for Advanced Construction Systems Inc. For a number of years, it sold its products through Butler Manufacturing Co., of Kansas City, Mo.

“About four years ago, we unwound that license. It expired, and we decided to go it alone,” he says.

The company also also changed its name about 4 1/2 years ago, he says adding that tekR—with the emphasis on the R for R-value—“more closely relates to what we represent in the industry.”