Clarity contracts with six rural hospitals, is close with Rockwood 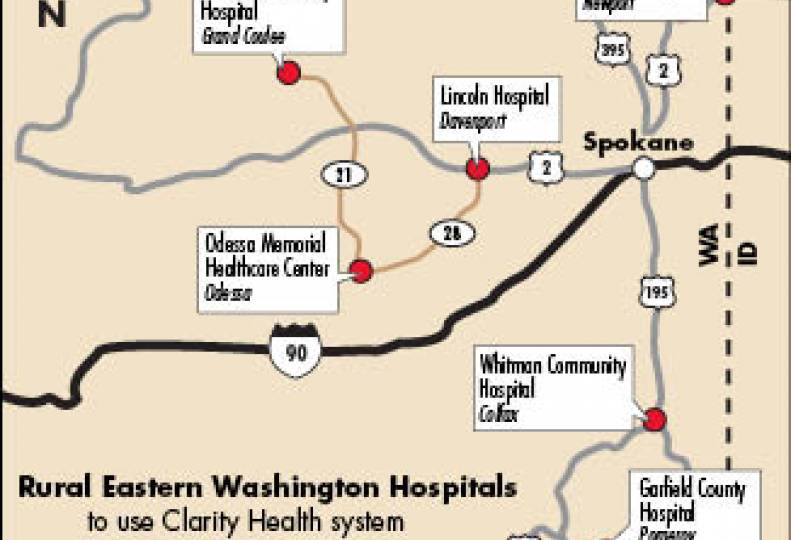 Peter Gelpi, Clarity's founder and CEO, says the company inked a contract last month to provide its services to a network of six rural Eastern Washington hospitals, referred to as the Critical Access Hospital Network.

Gelpi says Clarity hopes to have its system fully operational in Eastern Washington by the end of the first quarter of next year. Once the system is up and running, the six rural hospitals in the critical access network will use Clarity's system to refer patients to Rockwood Health facilities and to track the progress of the care those patients receive. Progress information could include when a patient is seen by a specialist, whether a patient is referred to other specialists, and hospital admissions and discharges.

Clarity plans to open a small office in Spokane's hospital district early next year, Gelpi says. It will employ one or two people, he says.

Lincoln Hospital CEO Tom Martin says the rural hospital administrators are talking to other rural hospitals in Eastern Washington that might also start to use the Clarity system.

Gelpi says Clarity also has approached Providence Health Care about becoming part of the Eastern Washington referral network, but Providence hasn't been receptive thus far. Clarity currently operates in two other markets—Pierce County in Western Washington and in south central Washington—and sometimes other hospitals jump on board once the system is up and running in their communities, he says.

In Pierce County, he says, physicians who use the system often ask specialists to whom they make referrals and hospitals with which they work to become part of the system.

Clarity currently is running a demonstration of its system at Lincoln and Newport hospitals, Gelpi says. Essentially, the system is installed at both hospitals, and the staffs are using them to input patient referrals, but the referrals aren't actually being sent anywhere.

Even so, Lincoln Hospital CEO Tom Martin says the system's benefits are apparent. For the rural hospitals, he says, it allows them to get their patients the specialty care they need and helps them to know when that patient will be returning to a primary-care physician at the hospital.

"It allows us to get the patient back into our community and assure that patient's outcome is optimal," Martin says.

Currently, he says, patient referrals are made manually, with administrative staff at the rural hospitals calling specialists' offices to make arrangements.

"The only record is what's written down on either side," he says.

After that initial phone call, he says it's difficult for a rural hospital to track whether a patient was seen by a specialist as arranged, if a hospital admission was necessary, and other vital developments.

He asserts, "Clarity enables folks to have a way of connecting with every person who participated in the care of that patient. It solves all kinds of problems."

Another feature of the system is that it's set up to handle patient insurance information as well, so a specialist's office knows whether a patient has coverage—and the extent of that coverage—when the referral is made. While that's a secondary benefit, it's a primary attraction to the system for a number of physicians, Gelpi says.

The two Eastern Washington hospitals that are testing the system are averaging a total of about 100 referrals weekly to specialists—most of whom are in Spokane, Gelpi says. If that volume holds true for the other hospitals in the system, the six rural hospitals will average 300 referrals a week, or about 15,600 a year.

Currently, Gelpi says, the company's system is the conduit for thousands of referrals a month in Pierce County, and about 500,000 unique patients have been referred through system since it was put in place in 2008.

Referring physicians pay a $70 monthly subscription fee to use the service, and physicians who receive referrals pay a per-referral fee of $3.

In addition to its plans in Eastern Washington, Clarity is in talks with a group of hospitals in southeastern Washington and north central Idaho. Those hospitals includes Tri-State Memorial Hospital, in Clarkston; Gritman Medical Center, in Moscow; and Syringa Hospital & Clinics, in Grangeville, Idaho; among others. Some of those hospitals would refer patients to Spokane as well, though others would refer patients to regional hospitals closer to those communities.

Outside of the Inland Northwest, Clarity plans to enter the Bellingham market and the Anchorage, Alaska, market in 2012.

Gelpi says the system doesn't compete with the electronic medical records system operated by Spokane-based Inland Northwest Health Services. Rather, he contends, the two systems complement each other.

"In our world, having a repository like that (of INHS) is very helpful," he says. "Not only would you have clinical content, you're providing that context. There's a lot more narrative to the conversation than with the EMR."