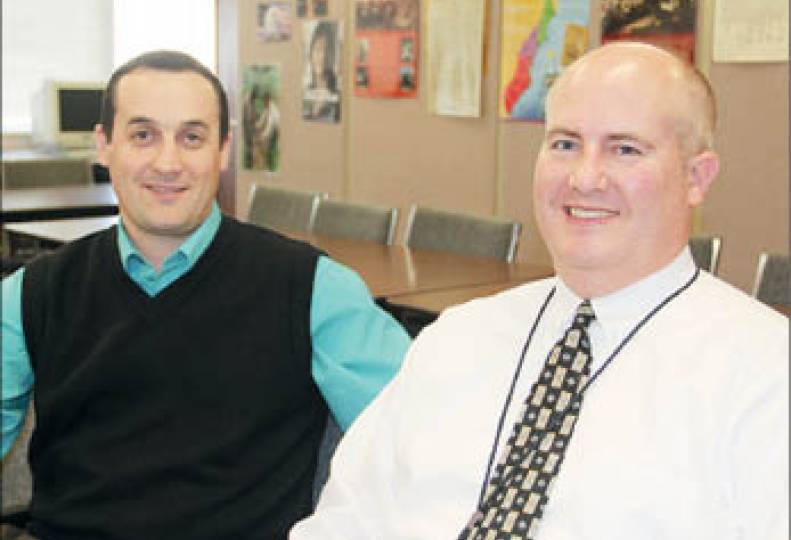 -—Staff photo by Jessica Valencia
Ivan Yerebakan, left, and Greg Franson says the micro-enterprise development program here has made 109 loans worth $958,000 since 2007, helping to create 314 jobs.

Greg Franson, of SNAP Financial Access, and World Relief Spokane's Ivan Yerebakan have worked in tandem for years on a program meant to kick-start small businesses operated by refugees that find themselves relocated to Spokane.

"When the program started back in 2004, (refugees) weren't really trusting," Franson says. Partnering with World Relief helped foster trust, he says, due to the existing relationships the refugee organization already had in place.

Franson says that since 2007, the micro-enterprise development program has made 109 loans worth $958,000, helping to create or retain 314 jobs. He says the average loan amount distributed per applicant is about $10,000. Of those, four loans for a total of about $25,000 have been written off for a loss.

Including loans distributed through the micro-enterprise development program, Franson says SNAP Financial Access has made 245 business loans totaling more than $2 million since 2007. Franson says SNAP Financial Access has its own micro-enterprise lending program. It gets referral traffic for loan applicants from banks, other SNAP departments, and its website.

Franson says the process takes about two weeks from application to closing on a loan. He says the program also helps clients come up with collateral and a business plan, if applicable. Franson says loan applications are either approved or denied by a six-person loan committee.

About 80 percent of loans are distributed to people who are in or plan to enter the trucking industry, he says, primarily to help cover the cost of the truck or trailer. Other businesses the program sees requesting loans include franchising opportunities, auto repair, and auto sales.

During those workshops, Franson says up to three translators may be working at one time in the classroom space at World Relief, located at 1522 N. Washington, with the room seating up to 30 people. Last year, World Relief Spokane hosted 24 workshops about business and financial management, he says.

Yerebakan says for some refugees who use the micro-enterprise development program, those workshops are a crash course in business and finance. He says some refugees who have been in camps for 15 to 20 years might not be familiar with the banking system or even computers.

Franson says he would like to see the workshop portion of the program grow to encompass every refugee seeking assistance from World Relief.

He attributes some of the success of the program to the desire to be self-employed as expressed by the population the program serves.

"I always assumed everyone wanted to be self-employed in America," Franson says, adding that—compared with non-immigrant Americans—the refugee population is more than twice as likely to want to own their own business, he says.

Yerebakan attributes some of that desire to a refugee's life back in their home country, where it may have been more traditional to be self-employed either through farming or a family-owned business.

"Refugees tend to have a challenge obtaining credit opportunities," Franson says, adding that garnering a loan from the micro-enterprise development program can help a refugee start to build up credit.

One of the goals of the program is to help clients obtain future loans and lines of credit, Franson says. Building credit provides a building block for refugees to begin to rely less on SNAP for financial support.

"We're always looking to see refugees grow, open their own business, and be successful," Franson says.

Yerebakan says roughly 2,400 refugees moved through Spokane between 2007 and the end of last year. About 430 refugees relocated to Spokane last year alone, primarily from Burma, Bhutan, and Iraq, he says.

For 2011, the latest year for which data is available through the U.S. Department of State, the United States admitted more than 56,000 refugees, about 24,000 short of the refugee admittance ceiling of 80,000 for that year. During that year, the top three countries whose residents sought refugee status in the U.S. were China, Colombia, and Ethiopia.

Founded in the 1940s, World Relief has 23 offices nationally, including World Relief Spokane. To date, the organization as a whole has resettled more than 236,000 refugees in the U.S.

World Relief Spokane has been in operation since 1992. In addition to the micro-enterprise development program, the organization offers employment and immigration services, and a match grant program, which helps refugees become financially self-sufficient.