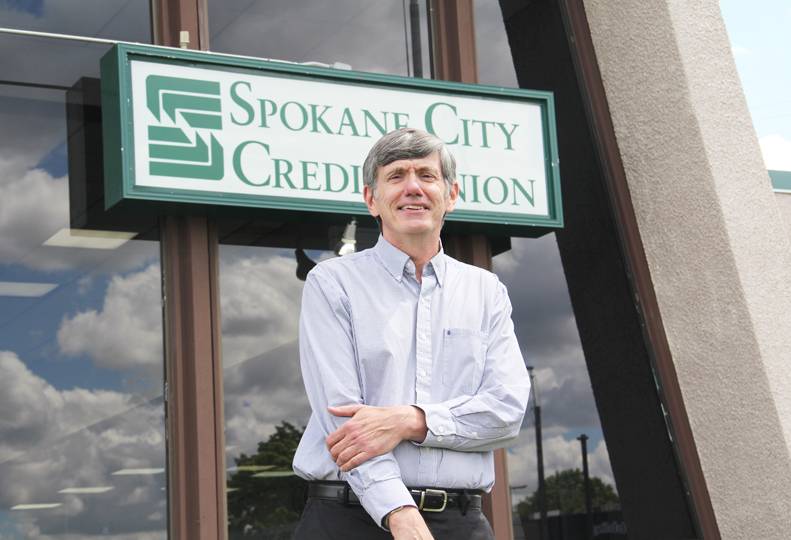 -—Kevin Blocker
Spokane City Credit Union’s Gene Fitzpatrick says the organization currently serves a total of 5,300 members, 60 percent of whom work for the city or are retired municipal workers.

Gene Fitzpatrick, who now approaches the first full year of his tenure as president and CEO of Spokane City Credit Union, says that since he took over, the institution’s focus has been on improving service for its existing customers rather than recruiting new ones.

“In April, we moved our mortgage origination program in-house. We can now originate our own loans, keep them, and service them here,” Fitzpatrick says.

He adds, “We don’t do VA or FHA loans. It’s all conventional, but that effort has been well received.”

Fitzpatrick says the credit union, with a total of 5,300 members, was able to simplify the loan process for customers and its loans officers by upgrading to new software applications.

“We’ve automated the loan process, and continue to explore other areas of operations where technology upgrades may be appropriate,” he says.

Founded in 1934, the credit union, located at 1930 N. Monroe, first began as an occupation-based credit union for city workers. It originally was named City Employees Credit Union of Spokane. Membership expanded in 1978 to include Spokane Transit Authority employees, and in 1980, the organization changed to its current name, and membership was extended to anyone who’s a Washington resident, Fitzpatrick says.

Fitzpatrick estimates 60 percent of the credit union’s membership to be either current or former city of Spokane or STA employees.

Fitzpatrick says the credit union is considered a small financial institution, with $37.5 million in total assets under management and a full-time staff of nine employees. The credit union doesn’t offer wealth management services.

“We don’t have branches, and we’re not part of a network,” he says. “But where we’re mighty is that we have great customer service. The average tenure of our employees is 17 years. What that means is that we know our customers in a way that most banks and credit unions just won’t.”

He adds, “As a member—and as an employee—you’re going to get taken care of here. We think it makes for a fantastic circle and a great business model.”

Fitzpatrick says the credit union is conservative in managing its growth.

“The Great Recession had a hard impact on all financial institutions, but we’re starting to grow again. We remain focused on our core (customer) groups, devoting our time and energy to them,” he says.

“We can’t go out and blitz the market with ads saying, ‘Take advantage of our new home loan origination program.’ We only have 2 ½ employees who are loan officers, so we don’t have the ability to take on that kind of volume,” Fitzpatrick says.

An avid baseball fan, Fitzpatrick uses the following analogy, “We’re not swinging for the fences looking for a home run at every at bat. We’re on base and moving around the diamond.”

Fitzpatrick says the credit union, which occupies a building constructed in the 1970s, is in early discussions of giving the building a more modern look.

“We think the North Monroe revitalization project can be a great opportunity for us to increase our visibility with the proposed change to the look on the street. It’s not that we’re for or against it; it’s coming. We want to put ourselves in a favorable position so we’re not hemmed in.”

Fitzpatrick succeeded Dennis Clinton, who retired as president and CEO of Spokane City Credit Union last August after working in that capacity for 38 years.

As for Fitzpatrick, who’s 60, he moved to Spokane from Boise in the early 1980s. His first job here was working for the former Old National Bank.

Fitzpatrick later worked as a state examiner for the Washington Department of Financial Institutions, which examines and regulates state-chartered banks and credit unions.

After leaving that position, Fitzpatrick worked for Numerica Credit Union and PrimeSource Credit Union, both based here, before taking the City Credit Union job.