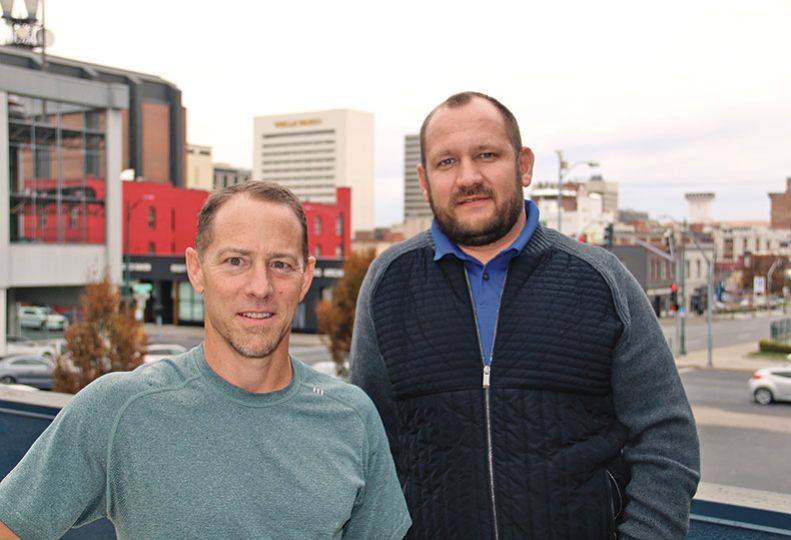 The founders of Spokane-based financial technology startup Obloco Inc., which does business as XpenseOne, say they’re laying the groundwork this year to make their cloud-based expense reporting software a staple product in the realm of online banking technology.

Entrepreneurs Victor Yefremov and Jim Schlosser, who created the company in 2016, say they’ve spent the last two years beta testing and developing their XpenseOne software, which is designed to simplify and digitize expense reporting processes for small to midsized businesses.

In addition to Yefremov and Schlosser, who serve as CEO and chief operating officer, respectively, XpenseOne employs three people, two of whom work in its 1,500-square-foot office at 327 W. Third and one who works remotely.

Yefremov says the company added two new software developers to its staff this year and hopes to add three more employees in the coming year to serve as its new sales team.

“This year, our goal is to ramp up the sales side as much as possible,” says Yefremov. “We want to be fully integrated with our current vendors, keep advancing the product, and work more aggressively toward building new relationships with vendors.”

Schlosser says the company isn’t yet profitable, but he hopes it will reach that point within 18 months.

“We have a core platform, but there’s still a lot we can do to enhance the product and build our relationships in the industry, so I’m excited to see where our momentum takes us this year,” he says.

Although he declines to disclose the funding amount, he says that round of funding enabled the company to hire more employees and prepare XpenseOne for its September launch with Washington Trust Bank.

Geoff Forshag, Washington Trust’s vice president of commercial and retail products and services, says the bank has been working with Obloco since the company first began developing XpenseOne.

“We were excited to be involved with a local technology startup offering an innovative approach to expense reporting,” says Forshag. “It was rewarding to see the speed at which they were able take a concept for a feature or workflow from our customers and quickly translate it into the product.”

Forshag says Washington Trust chose to be involved in XpenseOne’s pilot testing phase in order to offer its small business customers innovative tools and give them a voice in new product development.

“We have some amazing customers, and I can say they were very good about providing feedback as well as thorough testing throughout the pilot phase,” he says.

Forshag says Washington Trust went live with XpenseOne in September and is currently working to educate employees about its features and benefits so that they can understand the software better and recommend it to customers based on their needs.

“Customer response has been positive, and they like the clean interface and ease of use the system provides so they are able to deploy quickly without a lot of setup and employee training,” he says.

Following their product’s successful launch with Washington Trust, Schlosser and Yefremov say they now look to develop new relationships with other banks, financial technology companies, and credit card companies as they continue to add new features to their product.

Yefremov says the XpenseOne software includes both a back-end administrative portion and a phone application that enables real-time expense reporting.

The phone application lets owners and employees capture business expenses by photographing receipts and inputting information, which they then can send in as a digital expense report.

“The application lets you capture and manage all expenses digitally,” he says. “Employees can use it to report mileage, lodging, and food. They simply choose the category it falls under, take a photo of the receipt, and it’s uploaded and forwarded to whomever approves and reconciles expense reports for the business.”

Although there are other companies offering similar software, Yefremov says part of what makes XpenseOne different is that it’s specifically designed for use by small and midsized businesses.

“Sixty-five percent of small to medium-sized businesses are still using pen and paper or Excel spreadsheet systems to manage expense reports,” says Yefremov. “Those are time consuming and expensive processes that involve a lot of manual data input, so many of those businesses have been looking to banks to provide accounting and expense reporting software.”

“We saw that tracking expenses was a pain point for businesses,” he says. “And we felt that being able to pair this software with the online services offered by banks was an opportunity that just made sense.”

While other companies are competing with banks, Obloco sees working with banks, which are already partnering with different vendors to offer customers online banking and bill pay services, as a win-win situation, Yefremov says.

“Our product is about driving business customer retention and increased revenue for banks while automating the entire expense reporting process for businesses,” he says. “How we do this hinges on our product being positioned in the banking ecosystem, becoming a business banking standard similar to what bill pay services have become.”

Bill pays are online payment systems offered by many banks and financial institutions that allows customers to make regular, recurring electronic transfers from a bank account to settle their monthly bills.

Yefremov says the company has chosen to focus on offering its software first to regional and community banks, to enable them to better compete with larger banks that will soon have similar technology.

“Banks see XpenseOne as a customer retention tool, because it’s a type of software that’s in high demand among small business customers,” he adds. “We want to work within the banking ecosystem, because it gives us access to those customers who are already looking for these solutions.”

As a small business owner himself, Schlosser says he’s excited about the potential the software has for area businesses.

Yefremov and Schlosser say XpenseOne already is exploring partnerships with three major financial technology companies to work on ways it can begin to integrate its software into core online banking systems like the Automated Clearing House, also known as ACH.

ACH is a network that enables electronic payments and automated money transfers between banks without the need for paper checks, wire transfers, credit card networks, or cash.

“At the moment, we do not have the connection with the banking payment core engine yet, but the functionality exists on our side,” says Yefremov. “We need to be integrated into the payment core provider’s platform in order to deliver simple reimbursements, which is … in early stages of development.”

Yefremov and Schlosser say XpenseOne also is in discussions with Visa and MasterCard to research potential ways the software could be integrated into small business products offered by credit card companies.

“Visa, in particular, has been very open to working with us, letting us play around with how our software might serve to enhance some of their small business products,” he says.

“We’re especially interested in the potential for adding features like card control and push notices to future versions of XpenseOne, so we’re happy they’ve been so accessible.”

Push notifications, he says, would allow businesses to send their employees text reminders for tracking expenses. Meanwhile, card control features would enable businesses to set dollar limits on company cards, or parameters such as allowing the cards to be used only at certain merchants or in set geographical locations.

“Businesses could use this feature to set limits on cards, or request that they be turned on or off,” he says. “It makes tracking expenses on company cards that much easier.”

Similarly, a reimbursement feature would enable employees to be reimbursed more quickly in situations where they’ve used their personal card or cash to pay for a business expense.

Schlosser says XpenseOne expects to be able to announce several new partnerships with both technology companies and credit card companies within the first quarter of 2019.