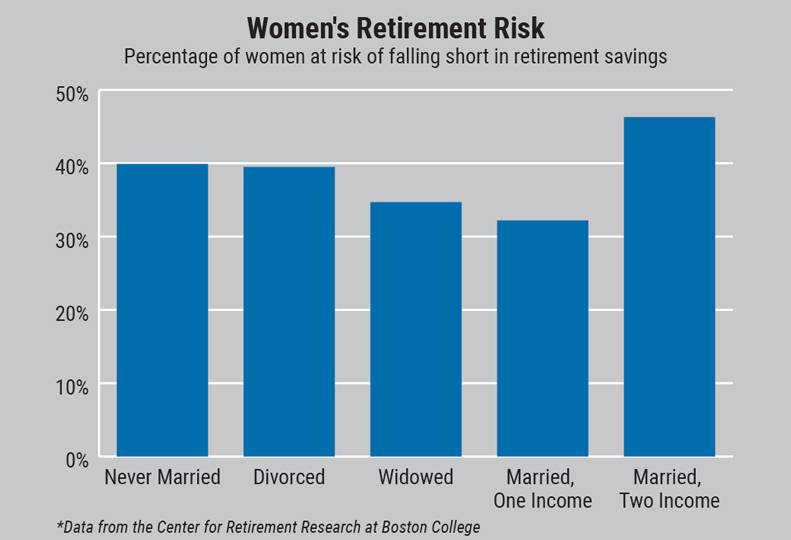 A lack of preparedness early in life is placing women — particularly married women — at a higher risk of falling short in retirement, says a new study by the Boston College Center for Retirement Research.

To start, traditional pension plans have become less common. More retirement plans are dependent on Social Security, a system that was designed in the 1930s during a time when few women were employed outside the home. As a result, the program makes a wife eligible for a spousal benefit equal to half her husband’s benefit only if her own earned benefits is lower than half of her husband’s benefit.

A woman in a two-income household who earns the same or more than her spouse won’t receive Social Security spousal benefits, and lower survivor benefits, if any, according to the report.

Survivor benefits are payments - either one-time or monthly - a surviving family member is entitled to if the deceased worked long enough to qualify for it.

Gordon adds that she would instead claim her own benefits from her income.

“You see that dichotomy take place a lot in the Social Security space. So, let’s say you have your average baby boomer that the husband’s taking in $2,000 a month, the wife’s taking in $1,000. If the husband predeceases the wife, she’ll get the greater of her benefits or his.”

However, he adds, if the husband claims the Social Security early, it will handicap the wife.

“There’s a lot of Social Security strategy that isn’t necessarily taken into account on the front end, especially if there’s no additional pensions or guaranteed sources of income, that’s where Social Security can come into play,” he says.

Another contributing factor, specific to two-income households, is the tendency to increase spending as one makes more income instead of putting the extra funds toward savings, or what Gordon refers to as the “lifestyle creep.”

“What we always want to be cognizant of, though, is those big shiny goals,” he contends. “Inevitably at some point I want to have a choice whether to go to work or not.”

So, taking a page from Warren Buffett and paying yourself first is something to keep in mind, he says.

Overall though, the biggest contributing factor to risk is the lack of savings, Gordon contends.

“The preparedness of people flowing into retirement is astoundingly low. People are just not saving,” contends Gordon. “It’s getting better … but what we’re starting to see is the effect of not doing enough planning on the front end.”

A person is at risk if the projected replacement rate falls more than 10% below the target of having enough income in retirement to maintain the preretirement standard of living.

He adds, “It’s just a lack of saving on the front end, and that’s not the wife’s problem, it’s a household problem of lack of preparedness from a savings standpoint, and she gets the brunt of it because she’s the one outliving the savings, not the husband, a lot of the times.”

Women, who on average have longer lifespans than men, also tend to take on caregiver roles later in life, either for their own parents or their spouse, says Gordon.

In Spokane County, 47.6% of women are married, according to the Eastern Washington Institute for Public and Economic Analysis, while 27.1% are not married, 16.5% are separated or divorced, and 8.7% are widowed.

Data isn’t available indicating how many households in Spokane County are two-income households.

Women in general have a higher risk of not having enough saved for retirement, the report notes. On average, women earn about 20% less than men, and therefore receive less in Social Security benefits.

Another study by Boston College estimates women are projected to have 42% less retirement income than men and accumulate 32% less in retirement savings over their lifespans.

There are several steps a person can take to mitigate this risk, Gordon contends.

“One obviously is the basic blocking and tackling and making sure that you’re claiming Social Security at the right time,” he says.

Beyond that, Gordon recommends running through longevity risk and stress test scenarios to ensure that the proposed savings can cover increased medical costs during one’s projected lifespan.

He adds that he generally performs longevity risk assessments out to age 100 to accommodate any unexpected costs later in life, regardless of whether clients think they won’t live past 80.