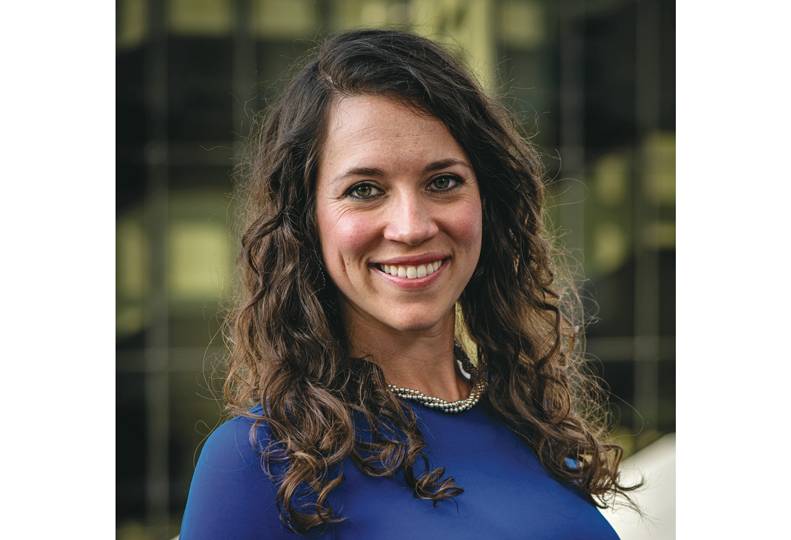 “A shooting star,” says Tom Simpson. “She travels fast, she’s bold, leaves a trail, and she lights up the room.”

It’s easy to see why these words come without hesitation about the 31-year-old Lacy Crowder, though she’s more apt to describe herself as dynamic.

“Or loud, maybe,” she says with a laugh. “But we’ll say dynamic. I’m blessed with really high energy.”

Crowder started work as the chief financial officer of NAI Black about a year ago. She met Simpson, who manages the Spokane Angel Alliance, when he recruited her to work with the angel investment group and became her mentor.

Simpson says he is struck by how hardworking and tenacious Crowder is.

“I think that’s what really differentiates her. She has big expectations and goals, but they weren’t just words. She actually went out there, worked hard, put herself in front of opportunity and got it done,” he says.

Crowder adds that Simpson taught her to step out of the traditional shell of an accountant.

“He broadened my horizons to show me there’s different ways to achieve success and also take risks. They’re probably going to work, and you’re going to be okay,” she says.

Her public accounting career started in a small firm in Wenatchee, Washington, where she says she found a passion in working with small businesses. The Spokane native decided to return to her hometown, where she spent a year at the publicly traded electronic contract manufacturing company KeyTronicEMS, for which she was an analyst. Crowder then jumped to local pet DNA testing startup Paw Print Genetics where she worked as the director of finance.

After a few years, she decided to start her own consulting firm, which she says is one of her proudest achievements.

“I chose accounting because I knew I could be self-employed and do it, and the fact that I did and was decently successful, I’m proud of that,” she says.

However, when she heard Gloria Ries, then CFO of Spokane-based real estate brokerage NAI Black, was planning to retire, Crowder knew she had to jump at the chance to work in the real estate industry.

“I grew up under a table saw,” she says, adding that her parents had rented or flipped over 30 homes while she was growing up, kickstarting her passion for the industry.

“Seeing the footprint of all the properties (NAI Black) manages is amazing ….There’s a big impact on the community through real estate,” she says.

In the next chapter of her life, Crowder would like to own commercial real estate and to start a family someday, she says.

Outside of work, Crowder, who got her pilot’s license a few years ago, is the treasurer of the Spokane Airport Tenants Association, at Felts Field, and the associate chairwoman of the Skyraider Aero Club. She also regularly gets involved in startups in the Spokane area.

“Through all the different things I’ve done, and I do in life … I want to be a positive influence on people in whatever way I can,” she says.

Her biggest piece of advice for success?

Crowder is a Spokane native who graduated from Northwest Christian High School at 16 as valedictorian. She then attended Whitworth University, where she got her bachelor’s degree in accounting. Crowder also has a master’s in accounting from Washington State University.

To destress, Crowder says she usually runs, gardens, or takes her labradoodle, Dixie Lynn, for hikes. She also has a Swedish warm blood horse, Dash, that she rides, she says.