An expanded field of uses at Sandpoint’s signature park 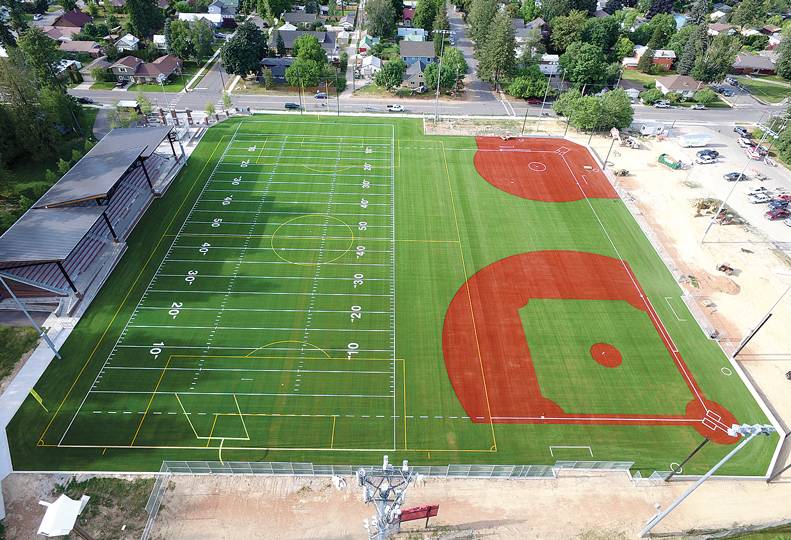 -BERNARDO|WILLS ARCHITECTS PC
Sandpoint’s War Memorial Field has received upgrades that enable it to serve as a sports venue as well as the home to the popular Festival at Sandpoint.

In 2019, the city of Sandpoint, Idaho, sought to retain a team to perform a comprehensive parks and recreation master plan.

Dell Hatch, landscape architect and principal at Spokane-based Bernardo|Wills Architects PC, who claims Sandpoint as his hometown, enlisted Tom Diehl, principal at Boulder, Colorado-based GreenPlay LLC, for the project in his hometown.

The staff at GreenPlay consists of nationally recognized experts in parks, recreation, and open-space management. With the mix of local and national expertise, the team won the project and set to make a plan for the small but vibrant community of Sandpoint.

While the master planning process started like any other, with a comprehensive examination of every parks and recreation facility in Sandpoint, the city expanded the scope as the project progressed to include site-specific master plans for City Beach, the downtown section of Sand Creek, Travers Park Sports Complex, and War Memorial Field.

Each site had its own workshop, and citizens and stakeholders could make requests, check in with the current concepts, and offer feedback. This input shared was invaluable to the design process.

For example, the original City Beach plan included a reorientation of the boat launch, a major component of the beach. The local sailing group expressed concerns for safety and the depth of the water at the proposed boat launch area and were able to work with designers to optimize the site for safety and functionality.

At the start of the project, the team embarked on “The Good, the Bad, and the Ugly” tour of the city of Sandpoint’s parks and recreation facilities. The Festival of Sandpoint had just concluded its 37th year at War Memorial Field. Performances, various festival activities, and patron foot traffic typically left the field in poor condition. As they toured the site, the team members started brainstorming solutions to address field conditions. The team discussed the field, the space, the different groups that wanted to use it, and the possibility of synthetic turf was presented.

Hatch starting drawing. Not only could a rectangular field be converted for use by soccer, football, and lacrosse, but an integration of a baseball and softball field was possible. Further studies showed that artificial turf could increase the use of the field twenty-fold over the course of the year if the demand were present. The city could solve the poor field condition and overuse issues, and the funding was ready.

The city had passed a 1% local option sales tax in 2015 with the intent to use the funds to improve War Memorial Field. Before expiring at the end of 2020, the tax raised $6.75 million. The first phase of improvements focused on the renovation of the Barlow Stadium grandstands, which were deemed unsafe for use in 2012. The new grandstands soon outshined War Memorial Field’s natural turf field that suffered from poor drainage in the wet season and overuse.

But there was another factor to consider before moving forward. The Festival at Sandpoint had called War Memorial Field home for decades. Festival organizers were concerned about how the event would function for a 10-day period on artificial turf, which could host 3,000 to 4,000 people per day.

Based on the completed studies and Diehl’s experience managing collegiate events on a synthetic turf field, the city decided to move forward with the design, bid, and construction of a new War Memorial Field. The intense schedule was due to a hard deadline of the Festival at Sandpoint having access to the field in July 2020. In addition to the accelerated schedule, crews had to battle wet construction conditions in May and June—the most critical period for earth work and preparation for the field to receive the artificial turf.

Phil Boyd, principal engineer at Coeur d’Alene-based Welch Comer Engineers, had a solution for the fine-grain soil that made it impossible for machinery to perform the necessary site work.

“We can certainly design this field, but if the contractor can’t build it, there’s no point,” explains Boyd. “The best option was to use a cement-treated base, where the topsoil and most of the subsoils are removed, and cement is mixed into subsoils. This creates a hard surface for crews to grade and complete the remainder of the site work.”

Through the rain and snow and COVID-19 delays, the project was completed by J7 Contracting Inc., of Bonners Ferry, Idaho, in July 2020.

Due to COVID-19, organizers canceled the Festival at Sandpoint in 2020 for the first time in its history. Instead of thousands of festival goers, local youth athletes poured into the stadium in the first weeks of usage to practice for sports seasons in a return to “normal.” The field was an immediate hit, utilized from opening to closing with city youth sports, high school practices and games, and local events and graduations. City of Sandpoint staff had an enviable new challenge—scheduling all the requests to use the field. But the staff no longer had to consider the impact of games and practices on the field conditions. Everyone could be welcome.

On the dedication plaque at War Memorial Field, it reads: “Dedicated by the people of Bonner County in honor of fallen men of the past, with the hope and prayer this field shall be for sport and games without the cloud of conflict and the threat of war. That the future participants shall play in peace ... forever.”

Hatch was able to watch the first Sandpoint High School football game on the new War Memorial Field, a place where he played sports growing up in Sandpoint. This is what we might call a full-circle moment—the opportunity for a designer to positively impact the community that raised him.

Thankfully, the community voted in favor of a tax to prepare for these improvements and came out in force to work with designers on the master-plan components. Everyone worked together to invest in a place for kids to play—without the cloud of conflict, just some good, old-fashioned sportsmanship.