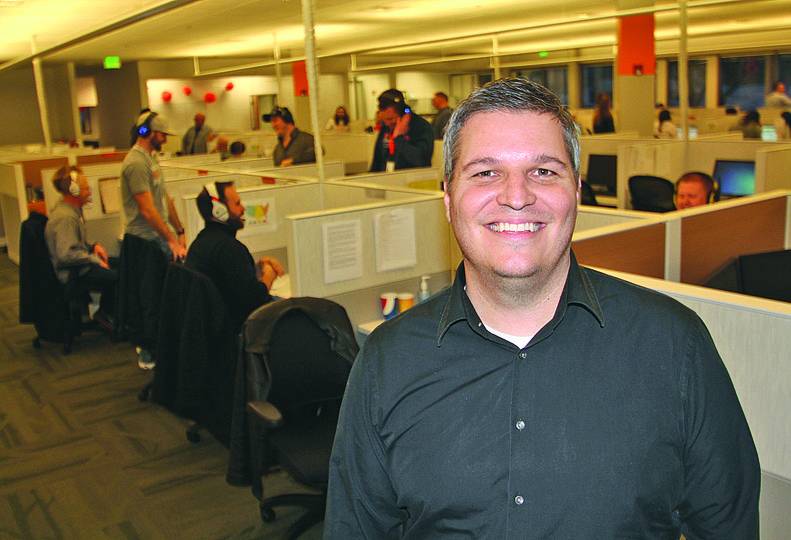 -—Treva Lind
Vivint’s Eric Patrick says the Liberty Lake office has about 90 employees, but that could grow to 400 in 18 months. Shown at lower left is one of Vivint’s touch-screen control panels that can be operated via smartphone or computer. 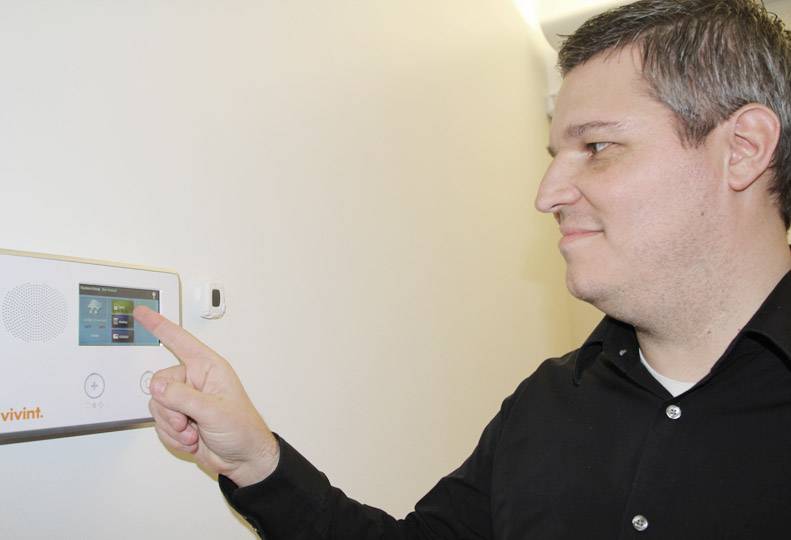 Patrick, a senior vice president of global channel sales, says Vivint offers a cellular-based platform and components to control locks, lights, camera surveillance, and other features. He claims that the company was the first to use such technology with a touch-screen control panel when it introduced the system in 2009.

The company continues to develop technology that enables customers to monitor remotely and control functions, such as heating and air conditioning, via a smartphone or other devices, Patrick adds. More recently, it’s added features such as carbon monoxide detection, as well as severe weather and tornado alerts.

“Our core is home security,” Patrick says.  “Yes, we provide technology in the home, and yes, it does automate controls like lights, heating, and the locks, but we really tie all of those features back to our security system. At the same time, those all make your life easier.”

Vivint expects to expand in 2015 to provide security and automation services to small- and medium-sized businesses, Patrick says.

“We’re in the research phase, because the commercial side has slightly different technology needs and licensing requirements, but the security and automation needs are similar for doctor’s offices, dentists, small businesses,” he says.

First incorporated in 1999 as APX Alarm, the company rebranded as Vivint in 2011, describing the new name as deriving from the words vive, for “to live,” and “intelligent” for its technology. In the fall of 2012, Vivint was acquired by Blackstone Group LP, a New York-based investment and advisory firm, for $2 billion. Today, its Provo campus has 400,000 square feet of floor space. CEO and co-founder Todd Pedersen remains at the company’s helm.

Last July, Vivint opened the Liberty Lake center, which is located in a leased 25,000-square-foot facility at 22425 E. Appleway. Vivint currently has 70 workers here, and another 20 being trained, to talk to potential clients who have requested information about its products, Patrick says. He adds that the company plans to ramp up to a total of 400 workers here in the next 12 to 18 months.

Companywide, Vivint has about 2,500 employees. The bulk of them are based in Provo, but it also has a few employees at a Canadian headquarters in Calgary. Among its employees are about 700 field technicians who work throughout the U.S.

Vivint says it currently has 850,000 customers in the U.S. and Canada, including about 800 in the Spokane-Coeur d’Alene area and about 12,000 in Washington state. A privately held concern, the company reported  total revenue  of $450 million for 2012, while the most current available financial information for 2013 showed recurring monthly revenue of about $42 million as of Sept. 30, says Lisa Davis, a Vivint spokeswoman.

In a security industry trend that’s emerged just in the last few years, Patrick says, the top U.S. providers of systems all are moving toward more wireless automation of security systems and home settings.

“The technologies in the security industry hadn’t changed in decades, and had a calculator-style keypad on the wall with plastic keys,” he says. “It has to be tied to a phone line 90 percent of the time. Vivint developed a color touch screen that’s a cellular unit, and no burglar can cut the phone line.”

Patrick adds, “Before, security was only beneficial if something went wrong, such as your house got broken into. A lot of people never interacted with their systems unless they were going away on a trip.”

Now, he says, Vivint’s competitors are providing cellular-based systems similar in nature to those the Utah company offers. However, Patrick contends that other residential security system providers are offering wireless options as an upgraded higher-priced option to a phone-line-based system, rather than as a standard product.

“Ours is 100 percent cellular and that is standard. We don’t even have the other (phone-line system),” Patrick says. “Other companies are starting to innovate.”

It also offers a lower-priced basic security system that is $99 to activate and has a monthly fee of $49.99.

The company offers fire, burglar, and other safety monitoring to residential customers, from two monitoring centers it operates that are in Provo and St. Paul, Minn. Some of Vivint’s products available for its systems include window and door sensors, smoke alarms, carbon monoxide detectors, cameras, and motion detectors.

Vivint develops all of its own technology and installs its systems.

Patrick says homeowners can even use the systems to control small appliances, such as a coffee pot, by attaching an appliance control device that plugs into an outlet, making the outlet controllable by the system.

He says customers can control the security and automation functions from a smartphone or computer as well as from the touch-screen control panel mounted on a wall.

The homeowners can receive an optional key fob that arms or disarms a security system, “so it’s not a 30-yard dash,” to disarm the system when returning home, Patrick adds.

Additionally, the system have the option to set a “stay mode” when they’re home that will alert them of any disturbances of outer perimeters of a home, as opposed to an “away mode” for external and internal alarms.

Patrick says an example of home automation conveniences include when people have driven a distance from home before realizing they forgot to lock the front door or close the garage door. He says Vivint clients can pull over, use their smartphones to log into their home system, and control the functions remotely.

“Over 50 percent of all new customers will add a home automation product to their security system such as cameras, or lighting control,” he says.

He says the systems can enable parents at work to receive a text that their child has arrived home when the youth enters with a user code, and then check camera surveillance to make sure.

Sensors can be placed on liquor, medicine, gun cabinets, and other specific areas of concern. Such sensors are triggered to alert a homeowner if one is opened, Patrick adds.

Vivint’s system also can be set up to enable several dozen users to receive a different digital code to a front-door lock’s keypad to enter a home, to accommodate a dog walker, cleaning company, or a trusted neighbor to check on a home, he says.

As a recent, personal example of his own, Patrick says he received an alert on his cell phone when a window was opened in his home, triggering one of the security sensors.

He adds that he could then instantly view a video feed on his phone from a surveillance camera that showed that his wife had cracked a window open to let in some air, inadvertently setting off an alarm.

Patrick says the company has a customer service philosophy of handling directly all aspects of providing its security systems, from the sale of the systems to installation and monitoring, and it doesn’t rely on any dealers.

He adds that Vivint will continue to upgrade technology aspects of its systems, such as adding the ability to provide customers with severe weather alerts.

“In tornado alley, we’ve saved lives,” Patrick asserts. “Customers tell us those go off five to 15 minutes ahead of an area’s sirens.”