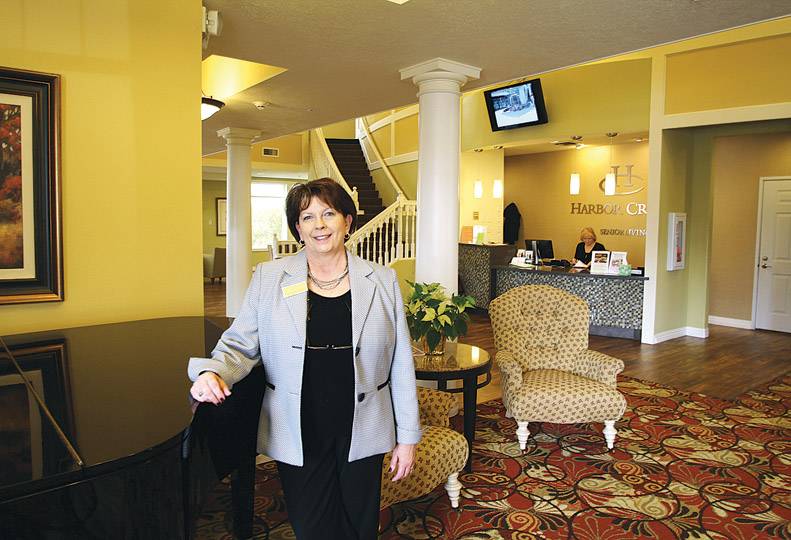 -—Mike McLean
Sandra Bachmeyer, of Brookdale Place at Harbor Crest, says the retirement community has an occupancy rate of 96 to 98 percent.

Brookdale Place at Harbor Crest aims to enrich the lives of residents at the retirement community by ensuring they have opportunities to make the best of each day, says Sandra Bachmeyer, sales manager at the South Hill complex.

“The occupancy is very high at 96 to 98 percent, with a waiting list for memory care,” Bachmeyer says.

“The Brookdale philosophy is person centered,” Bachmeyer says. “Our job to help residents have the best day they can have.”

Most residents are from the Spokane area, and a lot of them are lifelong residents of the South Hill or the Palouse, Bachmeyer says. “Spokane is quite a region in itself,” she says, adding that residents tend to look for retirement complexes closest to the neighborhoods with which they’re familiar.

Some residents, however, come from out of state because their relatives live near here, and some come from within the state, such as from the Tri-Cities or Yakima areas, because they prefer the facilities here, Bachmeyer says.

Some residents have gone through the continuum of living options offered in the retirement community, starting with independent living and later moving to assisted-living and memory-care facilities as their needs for services have changed, she says.

“If we can provide the care, they can stay through the end of life,” she says, adding that Brookdale Place at Harbor Crest doesn’t provide skilled nursing care.

“It’s a good feeling for residents to know they are in place, and they have their friends here,” Bachmeyer says.

Brookdale Place at Harbor Crest has a staff of nearly 100 employees, including full-time nurses during the day and on-call nursing staff during off hours.

Many employees have worked at the retirement community for more than five years, and they’ve come to know all of the residents they care for.

“We want to be able to walk down the hall and greet people by name,” Bachmeyer says. “We’re like family with our associates and our residents. They are our friends.”

Lunch and dinner menus change daily, and the dining director holds a menu chat with residents every week, Bachmeyer says.

“Residents have a big say here,” she says.

Brookdale Place at Harbor Crest holds monthly residential meetings to go over any changes in policies, and for residents to point out what they like and what they don’t like, she says.

“We try to accommodate residents, and stay attuned to what residents would like,” Bachmeyer says. “We have an open-door policy to residents and we try to be responsive.”

Many residents drive, and some have multiple residences. They enjoy the carefree lifestyle in a gated community with no maintenance to worry about, Bachmeyer says.

Two-bedroom independent-living homes, which are across Chaser Lane from the assisted-living building, range in size from 1,700 to 3,900 square feet of living space with equity buy-in prices starting at $300,000, including a meal plan.

The assisted living apartments range in size from 440-square-foot studio units to 900-square-foot two-bedroom units, with monthly fees starting at $3,000 to $4,325.

Other assisted-living amenities include all cable TV, weekly housekeeping, a theater and media room, game and social lounges, a computer room, and all utilities except phone service.

The average length of stay in the assisted-living facility is two years, Bachmeyer says. “I think there’s a trend with people staying in their homes longer and coming here later in life,” she says.

The memory-care section of the campus is comprised of four 10-unit buildings, on the east side of the campus, at 4925 S. Hailee. Each structure has its own living room, dining room, kitchen, and a secured back yard.

The private rooms range in size from 110 to 150 square feet, and monthly memory-care costs start at $4,250 per resident.

In Coeur d’Alene, Brookdale Senior Living also owns Emeritus at Coeur d’Alene, at 205 E. Anton. Brookdale’s other Inland Northwest holdings include two facilities in Moses Lake, and one in Lewiston.

Bachmeyer says Brookdale plans at some point to rebrand the facilities so that each facility name is identifiable with its location.