Even so, more women work in industry that has become more friendly to female drivers over time 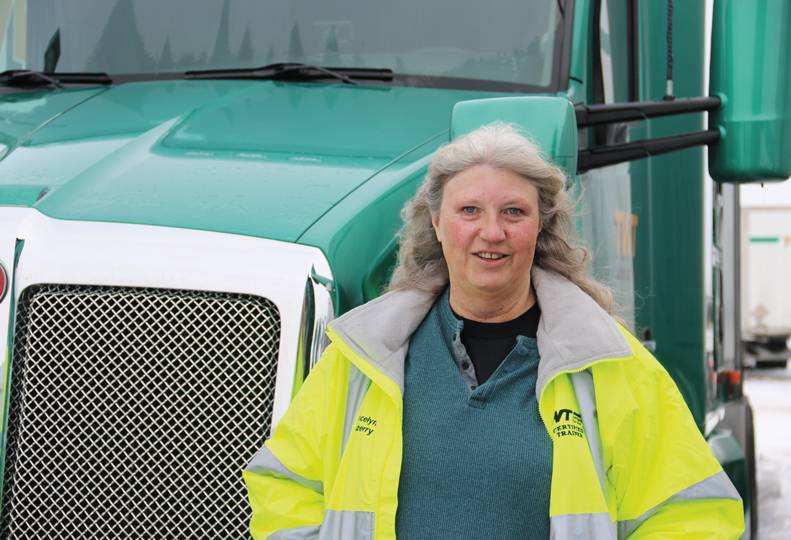 -Erica Bullock
Jocelyn Auberry is a fi fth-generation truck driver who works for T-W Transport. T-W’s parent company employs 19 female drivers; Auberry says there were only three when she started.

Across the country, alarms are sounding the need for more truck drivers as the pandemic has created an increased demand for shipping.

Although some trucking industry associations have decided to include diversity as a recruitment and retention strategy, some local trucking companies say what matters most to them is filling the vacant positions with qualified drivers, rather than focusing their efforts on recruiting more diverse candidates, including women.

Jocelyn Auberry, a fifth-generation truck driver, has been hauling freight across the country for 19 years and says she entered the profession at a time when women were discouraged from doing so.

Now a certified trainer as well as a driver, Auberry, 59, says she wants to help train more women to get behind the wheel of a big rig. But it’s been a slow road to progress.

According to statistics from American Trucking Associations, a national trade association for the trucking industry, drivers who identify as female make up 7.8% of the trucking workforce.

Bosma says the women who drive for Fast Way joined the company within the last five years.

“The trucking industry right now isn’t real concerned about gender or skin color or anything. If you can read, write, add and subtract, and you have a clean driving record, we will hire you,” Bosma says.

Female drivers at Trans-System make up 2.6% of the total drivers employed there, according to demographics data provided by the company.

“There were only three women (driving) when I started,” Auberry recalls.

She credits her truck driving instructor at Sage Driving School, in Kootenai County, as well as her mentors at Trans-System, with keeping her encouraged and motivated on the road.

Auberry says she’s trained between 40 and 50 drivers and roughly half of those drivers were women. She says she helps prepare students to drive, load, and tarp their freight, and she also helps some students prepare for a physical endurance test.

“If you’re looking for adventure, this is a great job for women,” Auberry says.

Jason Boudreau, 41, founder of Drive509 truck driving school, says a woman was his top instructor and the person who ran the whole school until a few months ago, but she since has moved on to a different career. Now, the commercial driving school employs two women who work in the office.

Boudreau says class sizes at the trucking school vary depending on the season, but he estimates 5% of his students are women.

She adds, however, that the physical demands of the job shouldn’t deter women from considering truck driving as a profession. She says she can teach the correct physical techniques to all types of bodies from short to tall and petite to large.

Bosma, at Fast Way Freight, says women may find some physical aspects of the job challenging, but tools are available to make some aspects easier. He says Fast Way Freight has been investing in electric pallet jacks to assist lifting and lowering freight instead of manual jacks.

“We do a lot of training on working smarter, not harder. We try to get all the tools we can to make the job safer and a little less physical,” Bosma says.

Bosma adds that automated shifting trucks are more comfortable to drive than manuals and are comparable to driving a motor home with air conditioning, heat, and Bluetooth technology.

Boudreau, at Drive509 says, “There’s no-touch freight where essentially you just back up to a trailer and drive it from one place to the other. You put it down, then go get another trailer. So, you don’t have to touch anything.”

While driver shortages have been reported for decades, the American Trucking Associations estimates the industry was short 80,000 drivers in October, a number that could rise to 160,000 by 2030—a shortage fueled both by retirements and turnover.

The average age of drivers at Fast Way Freight is 50, says Bosma. A number of older drivers have retired in the last couple of years, he adds.

Boudreau says employers are offering bonuses and have increased starting wages to attract drivers to work for their companies, however he hasn’t noticed any efforts to target women specifically to work in trucking.

Both Bosma and Auberry suggest introducing children to the trucking industry as a career possibility and to keep interest up as more truckers retire in the coming years.

“I want to let girls know this is an option for a career,” Auberry says.

Bosma adds that unfortunately, over the last 20 or 30 years, society has told high school kids “Hey you need to go to college and get an education. You don’t want to end up being a truck driver.”

Boudreau says, however, having a commercial driver’s license provides a decent opportunity to earn a living right out of school.

With driver safety an additional concern, both Boudreau and Auberry agree that, while women constitute a small percentage of truckers on the road, they exhibit safer behavior behind the wheel.

Boudreau contends some of his best students have been women.

“They’re good at listening and taking direction to learn,” he says. “A lot of times, the women are more open to the training.”

Auberry adds that truck driving is a good career for minority women too.

Boudreau agrees, adding that people from different countries around the world can get a commercial driver’s license and begin earning a decent wage.