Farm to Phone at Share.Farm 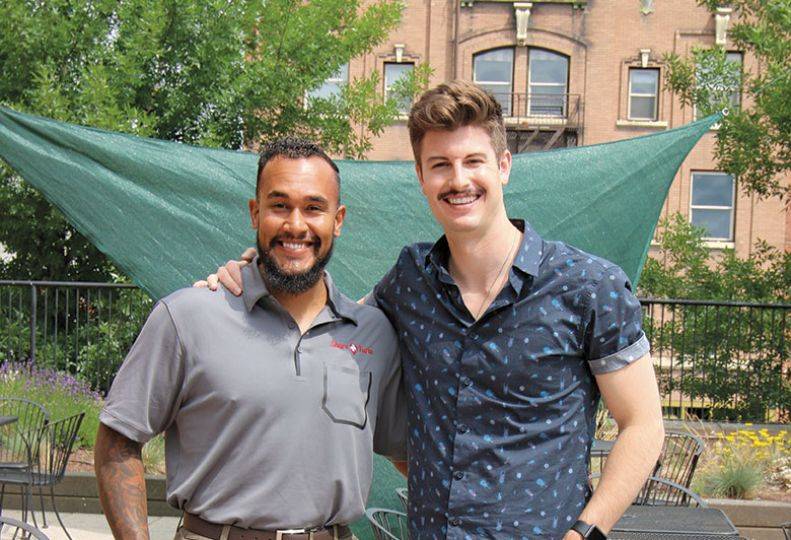 -—Virginia Thomas
Vince Peak, left, and Eric Kobe came up with the idea for Share.Farm while students at Whitworth University. The business duo has been testing the app in a beta version and plans to launch it formally on July 20. As of late June, about 700 people had downloaded the app.

Two entrepreneurs from Whitworth University are launching a free app that they claim could change the way farmer’s market vendors and customers interact.

Vince Peak, CEO of Share.Farm Inc., teamed up with Eric Kobe, the company’s chief security officer, late last year to pursue Peak’s business idea: a location-based app called Share.Farm that is meant serve as a year-round platform for vendors of produce and other goods typically sold at farmer’s markets.

Peak graduated last year with a bachelor’s degree in biology from Whitworth. He was introduced to master of business administration student Eric Kobe in December by Sinead Voorhees, director of Whitworth’s Graduate Studies in Business. Since then, the app quickly has moved through the development process. The company currently has three employees and several freelance contractors.

The idea was born when Peak, who is CEO of Share.Farm and founder of wildcrafting company Pacific Northwest Collective, which harvests wild native plants for herbalism uses, realized that the products he was selling at farmer’s markets weren’t accessible to customers year-round, and commercializing the products for retail sale would be too costly. Because so much business is conducted online, Peak decided to go digital.

“There should be a year-round access for people selling local produce or artisan goods like us,” Peak says. “People spend five hours a day on their phone, on average. That’s why we went with an app over a website.”

As of late June, Peak says, about 700 people had downloaded Share.Farm. The app lists vendors by proximity to the user. Regardless of their location, a user can find nearby vendors. Although it’s currently in the beta stage, when the full Share.Farm app is launched on July 20, Peak says users will be able to search for specific kinds of products, as well as see and rate nearby vendors, buy and pay for products through the app, and arrange to pick up their order.

Share.Farm will generate revenue through a sliding scale transaction fee applied to customers upon checkout, which offsets the cost of the transaction fee traditionally placed on the vendor for the purpose of processing payments. The more a customer spends, says Peak, the less they pay in transaction fees.

While Share.Farm is geared toward farmer’s market vendors, anybody can sign up to be a vendor on the app.

Peak says options for vendors seeking to sell produce outside of the farmer’s market season are limited and sometimes unreliable.

“Accessing that customer base outside of the farmer’s market, there’s too many barriers to entry; if you don’t have a brick-and-mortar storefront, if you can’t afford to commercialize, then you really can’t sell,” Peak says. “The only options that people were looking at, at the time, were quite literally Craigslist. That’s a shot in the dark.”

Vendors typically have negative revenue projections after the farmer’s market season has ended, Peak asserts, due to a lack of places to sell additional or leftover products.

“We want to change that,” he says. “We do all the marketing and advertising in the app of vendor items, so their only real goal over time as they get used to using the app is to sell, and we do customer acquisition and marketing. We think that our value propositions far supersede any other platform that may have some resemblance to us.”

Peak says one reason similar ideas haven’t succeeded may have to do with the way payments are handled.

“Other platforms have a merchant that the transactions go through, and the merchant pays out its vendors weekly or bi-weekly, sometimes monthly,” he says. “The vendors are out cash that entire time, even though they’re making sales.”

Rob Allen, founder of the Fairwood Farmer’s Market and director of the Inland Northwest Farmer’s Market Association, says the short period of time in which farmer’s markets operate, which is 21 weeks here, is one challenge vendors face. The cost of establishing an avenue for sales, he says, is another.

“While the farmer’s market channel might be one of the least expensive ways to (sell products), a typical booth will cost between $25 and $35 per week,” Allen says. “By and large, I think it’s admirable … to use technology to cut costs out of the distribution channel and make fresh and local food more profitable for the small farmer.”

Another pitfall of similar businesses, Kobe says, is the complicated question of distribution. Similar businesses have attempted to transport goods on their own, an expensive and time-consuming endeavor. Peak says the Share.Farm app currently allows for vendors and customers to communicate in order to arrange for an order to be delivered, mailed, or picked up by the customer, but Peak and Kobe hope to partner with delivery platforms like Uber Eats.

“That’s going to be down the line, probably in the next version,” Kobe says. “The feedback that we’ve gotten from customers, that’s something that they want. It’s our job to find a way to get that done for them.”

“We want user’s feedback. That’s how we created the app in the first place,” he says. “We went to farmer’s markets before the app was even a thing and polled vendors, polled customers, and that’s how we created the app, just off feedback. I know that end-user preferences vary and change, but when we get so much influx of asking for a certain feature or asking if things can flow a certain way, we’re like ‘of course.’ It’s not just our thing, we want it to be a community vision.”

The creation and launch of the app have involved several community members and organizations, Peak says, including Spokane-based startup incubator Ignite Northwest. Share.Farm was one of eleven businesses in this spring’s accelerator class.

“Like many of the people entering our program, they have a great idea but had no idea what they’re up against,” says CEO of Ignite Northwest Bill Savitz of Peak and Kobe. “I think that (Share.Farm has) a great application, especially for people who are interested in buying locally-grown and locally-produced products, and it’s also a great deal for the vendor because they have excess product after the season for farmer’s markets.”

“They’re phenomenal,” Peak says. “They provided us access to some really in-depth information, made it really easy to understand, as well as pretty much handed us access to some pretty high-level community members that helped groom our business plan and helped us create projections, and ultimately raise money.”

“I think there’s challenges in delivering any kind of product like this, but they’ve been working on it for a while and used a lot of our resources,” Hulsey says. “I’m really hopeful that those resources will help them be able to turn this into an effective business model.”

Peak says Share.Farm has received about $50,000 in funding from various sources, including Mind to Market, crowdfunding website Kiva, and individual private investors.

Share.Farm is launching in Spokane, but Peak says the duo hopes to significantly expand.

“We are really focused on increasing the community members of Spokane’s access to hyperlocal products, more education and awareness, but also at the same time, scale nationally,” Peak says.

Allen says Spokane is an ideal place to begin, due to the diversity of people who attend farmer’s markets and who might be interested in Share.Farm.

“I would say that Vince is in a nice ‘test market location’ by using Spokane as his base,” Allen says. “If you could scale in Spokane then it ought to be able to be replicated in markets larger than Spokane.”

Peak says efforts to expand to Coeur d’Alene, Moses Lake, and Ellensburg have already begun. He hopes to bring Share.Farm to Seattle, Portland, and Boise by the end of the 2018 farmer’s market season.

“I think where it will go is up to the communities that find value in it,” Kobe says. “Our mindset and really the foundation of Share Farm is to serve the community. Every decision that we make is centered around that. I feel like as long as we operate within that scope, we give ourselves the best chance for success and creating a valuable tool and valuable platform that people will use to grow their business, to invest in their neighbors, to support their community, to educate one another. That’s our goal, the essence of Share Farm.”