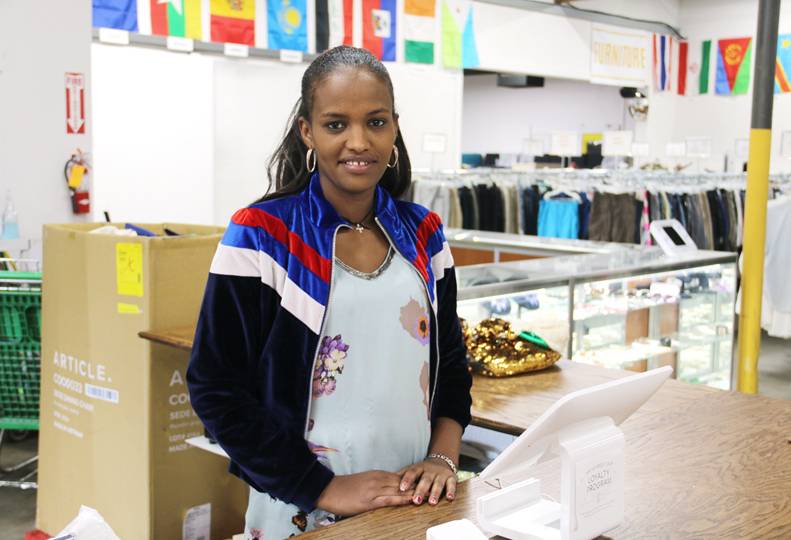 Spokane nonprofit Global Neighborhood Thrift started eight years ago with just two employees and a vision of helping refugees settle into the U.S.

Since then, it has grown to help roughly 135 refugees from more than 30 countries with job training.

Brent Hendricks, executive director and founder, says, “A lot of times, English is their fifth or sixth language. They’re raising a family in a new country, learning a fifth language, and learning a new job all at the same time.”

He adds, “Global Neighborhood doesn’t do anything except give opportunities to people.”

The nonprofit moved in April to its current home at 919 E. Trent, where it roughly doubled its retail and warehouse space compared with its former location at 902 W. Indiana, Hendricks says.

“We want to be able to take as many donations as we can from the community and turn those around and process them. All of that is where we create these jobs,” says Hendricks. “We were just out of space.”

He says, “For us, the drive has always been, how can we really help empower people in ways that recognize their dignity and worth?”

Hendricks says Global currently has an operating budget of about $500,000, which it funds through store sales and charitable contributions.

“We’ve calculated that for every $100 (donated) … we’re able to leverage that through our business and turn it into 18 hours of job training and also $188 in wages for former refugees, and we can recycle 500 to 600 pounds of goods,” he says. “We’re able to make a little go a long way.”

Global Neighborhood Thrift gets between 70 to 100 customers a day, which Hendricks says he hopes to grow as more become aware of the organizations move to a new location.

Hendricks says Global Neighborhood Thrift was born from nonprofit Global Neighborhood, which he started about 12 years ago after graduating from Whitworth University. The organization operated as a traditional nonprofit to provide services to refugees for about four years before shifting to its current operating model and opening the thrift store, says Hendricks.

“What became apparent to us through those first couple of years was that the primary need people had was employment,” says Hendricks. “For a host of different reasons, it’s often difficult for people to find work.”

He adds that it is also difficult for refugees to find jobs without an established social network in the U.S.

Because of this need, Hendricks shifted the organization’s model to be focused on job readiness. While doing so, Global also entered into a partnership with the Spokane branch of nonprofit Career Path Services.

“We provide the worksite, we provide all the training, supervision, and management, and then Career Path Services, through its partnership with the state, pays their wages,” Hendricks says.

Kelli Eller, branch manager for Career Path Services, in Spokane, says, “We partner with local nonprofits, and we place our participants there for 20 hours a week where they’re able to gain work experience, update their work skills, professional references, and work on workplace behaviors.”

The wages for this program, dubbed the Community Jobs Program, are supplied through subsidized employment, which is funded through the Washington state Department of Commerce, says Eller. Global Neighborhood Thrift has been a host site for the program since Global opened.

“What’s interesting is most of them speak very limited English, and very few of them have a common language, so English is their common language a lot of times,” Eller says. “Brent and his staff do a good job at using other means to communicate, whether it’s showing them hands on how to do a skill or something like that.”

She adds that a case manager at Career Path Services also works closely with the program participants on other skills needed outside the workplace.

Only about 10 nonprofits in the Spokane area, including Global Neighborhood Thrift, work with program participants who speak limited English, while 40 to 50 organizations work with what are referred to as “mainstream” participants, who are usually fluent in English.

She attributes the difference to a lack of resources available to most area nonprofits to be able to provide the necessary support for those who speak limited English.

“I really respect the work that they’re doing to make sure that the community has an awareness and are showing that these individuals are working hard to try and get employment and put in the effort,” says Eller. “Global is a big part of that.”

Hendricks adds, “We have two sides to our operation here, we have the job readiness program and then the people on our own payroll.”

Hendricks says the organization has helped refugees from over 30 countries, including Afghanistan, Iraq, Sudan, Somalia, Ukraine, Tanzania, and Kenya. The walls at Global’s thrift store on Trent Avenue are lined with flags representing every nation of origin for refugees Global has hired.

Global also structures its employee shifts around English as a second language class schedules, so employees can study English while still getting a paycheck, says Hendricks.

The nonprofit sells furniture, books, clothing, home goods, and electronics at the thrift store, and recycles what items can’t be sold as-is into new items. Hendricks says donations come from the community and are either dropped off at the store or picked up by one of Global’s drivers.