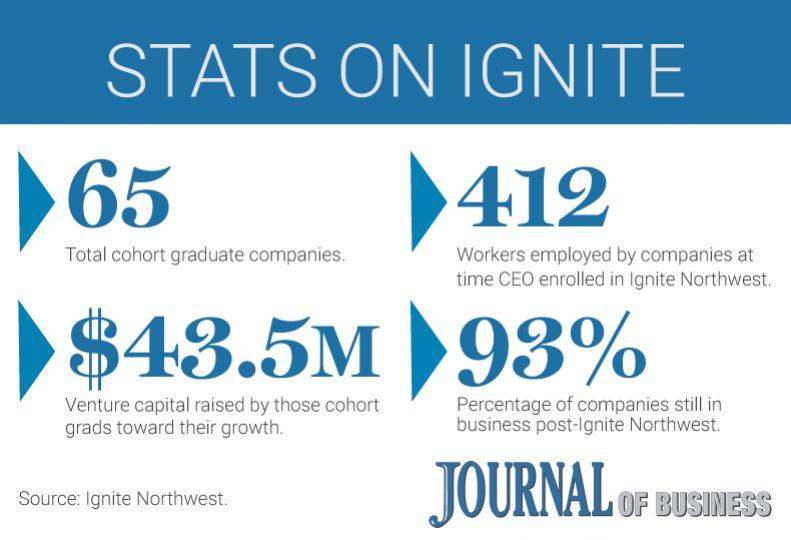 Spokane-based startup accelerator Ignite Northwest has begun its sixth round of business-growth education and coaching with 11 companies based here.

CEOs from the companies began their 13-week session on Feb. 6, says Ignite Northwest CEO Bill Savitz. In addition to classroom time, the CEOs will be given personal advisers with industry-specific expertise in an effort to guide them as they build and grow their business models.

Located at 714 N. Iron Bridge Way, Ignite Northwest is a nonprofit business accelerator that formed in 2015 to help young technology companies overcome early startup challenges. Specifically, Ignite is designed to help companies with working prototypes that already have entered the marketplace, but need a boost to become successful.

The organization was first started with a focus on helping fledgling tech companies here get off the ground. However, six classes later, Savitz says the organization has included businesses not from the tech sector as organizers have seen other good ideas presented.

• Genetic Veterinary Services, an animal genetics laboratory focused on educating and providing a variety of testing services to help improve the health in animals.

• Golden Sherpas, which aims to serve as an online platform for seniors and their adult children looking for retirement communities, elder care management, assisted living and home renovation.

• Healing Local, an online networking and directory platform for health practitioners searching for transparent and trustworthy reviews while improving referral efficiency in the medical field.

• Moving Beyond Wellness, a manufacturer of exercise and therapy devices designed to promote healing through increased strength and flexibility.

• Newcore Aviation, which provides products and services for the manned and unmanned aviation sectors.

• Unibest International, which seeks to offer more specific data to farmers and other agriculturalists who want to create better sustainability through more precise growing habits.

The companies not selected for the sixth class are encouraged to re-apply for the fall 2018 session that will start in August, Savitz says.

Since launching the accelerator program in the summer of 2015, a total of 73 companies, including the current class, have attended Ignite Northwest’s 13-week course.

Statistics compiled by Ignite say roughly a quarter of the startups are owned by underrepresented or specially recognized groups, including veteran-owned, minority-owned, and women-owned companies.

Jayson Cannon, a business consultant with Ignite, says 65 companies in Ignite’s first five cohorts employed a total of 412 workers while enrolled in the cohort, and more than 93 percent of those companies are still in business.

By the start of 2018, together, those companies had raised nearly $43.5 million in funding toward their growth and expansion plans, he says.

Since launching the accelerator program in the summer of 2015, a little more than 70 companies, including the current class, have attended Ignite Northwest’s 13-week course.