Nonprofit’s plans include focus on sustainability 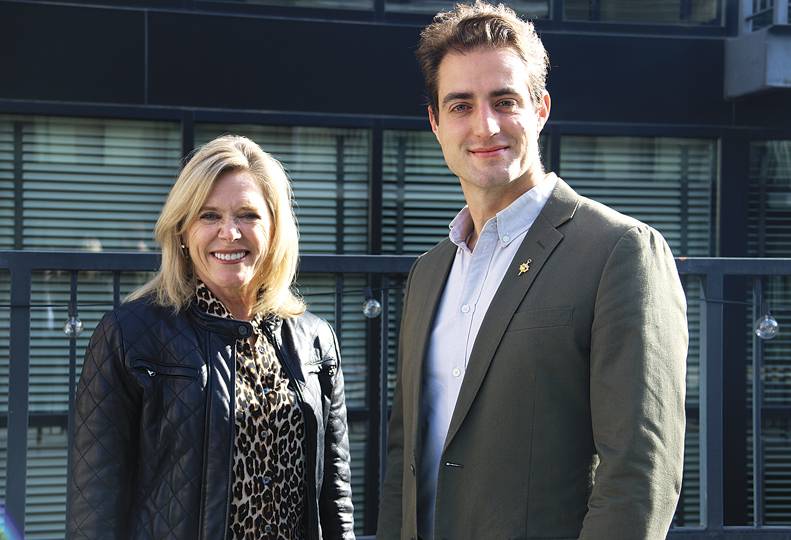 -Virginia Thomas
Stephanie Aden, left, has handed the reins of the Spokane chapter of the American Institute of Architects to Andrew Parker, who was recently hired as executive director of the organization.

The Spokane chapter of the American Institute of Architects has a new executive director.

Andrew Parker formally took on the position in mid-October. He’s taking the reigns from Stephanie Aden, who is retiring after leading the nonprofit industry organization here for nearly five years.

AIA Spokane, which has about 200 members, primarily focuses on continuing education for architecture professionals, advocacy at local levels, and networking.

Outgoing executive director Aden says AIA Spokane is adopting a new five-year strategic plan that’s modeled after the national association’s strategic plan. Parker will be charged with leading the implementation of the plan, as well as more typical executive director duties such as planning events, handling the chapter’s budget, and communicating with the chapter’s board of directors.

Aden says she’ll stay on at AIA Spokane in an advisory capacity into December. Aden is from Spokane and attended Ferris High School before receiving her bachelor’s degree in business administration from the University of Washington. Prior to leading AIA Spokane, Aden worked as marketing coordinator for Spokane-based DCI Engineers for about six years.

A key part of the strategic plan focuses on climate change and sustainability. Member architects are encouraged to use locally sourced, sustainable resources in design, to keep their knowledge of state energy codes current, and to advocate for legislation that supports sustainable practices.

Growing up in Oregon, Parker was familiar with many of the concepts of living sustainably. He knew people who lived off-grid, and he developed an interest in wildlife conservation that he says nearly led him into marine biology, rather than architecture.

Parker says sustainability was part of the reason he entered the architecture field. His path into architecture was cemented when he learned about the environmental consequences new construction can have.

“I remember learning about the impact that cities and buildings had on climate change,” Parker says. “I felt I could have a positive impact by being in architecture and having a say in how and what was done.”

The AIA Spokane chapter operates out of a 300-square-foot office space in the Courtyard Office Center, at 827 W. First, downtown. The executive director is the sole staff member of the local chapter.

Parker says membership in AIA Spokane has held steady throughout the past few years at around 200 members. The chapter relies on membership dues for most of its revenue, in addition to ticket sales to events such as an annual golf tournament.

The rates for dues depend on the type of membership. An individual active architect in Spokane can expect to pay $640 per year in total dues to the Spokane chapter, the Washington Council state-level advocacy arm, and national association. A member of the local chapter is automatically enrolled in the state and national chapters of the organization. Companies can also sponsor corporate memberships in AIA Spokane.

While originally from Oregon, Parker spent time in South Korea, in Los Angeles, and in the southern U.S. before returning to his Pacific Northwest roots with his wife, who grew up here.

Parker earned his bachelor’s in environmental design from Montana State University, in a program that he describes as focused on practical architecture and sustainability, before moving to Seoul, South Korea. There, he worked for architecture firm BCHO Architects & Associates on projects such as a home for a Hyundai Motor Co. executive and the Korean Pavilion for the 2015 World Expo, which was held in Milan, Italy.

“It was the complete opposite from being in … Montana, and it was a great deep dive into design and building architecture,” Parker says.

Parker moved to Houston to join his then-fiancée and attended graduate school at the University of Houston for his master’s degree in architecture.

“It was very different from my experience at Montana State—more theoretical and much more abstract,” Parker says.

Parker knew of AIA as a student in Montana but wasn’t part of the organization until he was working and studying in Houston. The large architecture community was active in AIA, he says.

Parker and his wife, Kit, moved to Spokane in 2016, shortly before the birth of their first child. Here, Parker began working at Spokane-based NAC Architecture.

“My most frequent role was as a project designer,” he says. “I often worked with the L.A. office and split my time between the education and health care studios.”

Parker was involved in several health care projects in the Spokane area that never came to fruition, including work on a Touchmark memory care facility and a Moses Lake medical office building, he says.

Founded in 1857, AIA is a U.S.-based organization that has more than 200 chapters worldwide. The Spokane chapter was founded in 1940.

For the Spokane chapter, the executive director is a part-time position. Parker says he intends to spend more time on his art when he’s not working or caring for his two young children. He describes his art as mixed media, combining India ink and acrylic paint. Some of his work is currently on display at Coeur d’Alene-based art nonprofit Emerge.

“I have always had one foot in art. My parents put me in art lessons when I was 5 or 6,” he says. “I kind of moved away from that as I got into architecture, but since we’ve been in Spokane, I’ve been doing more art.”