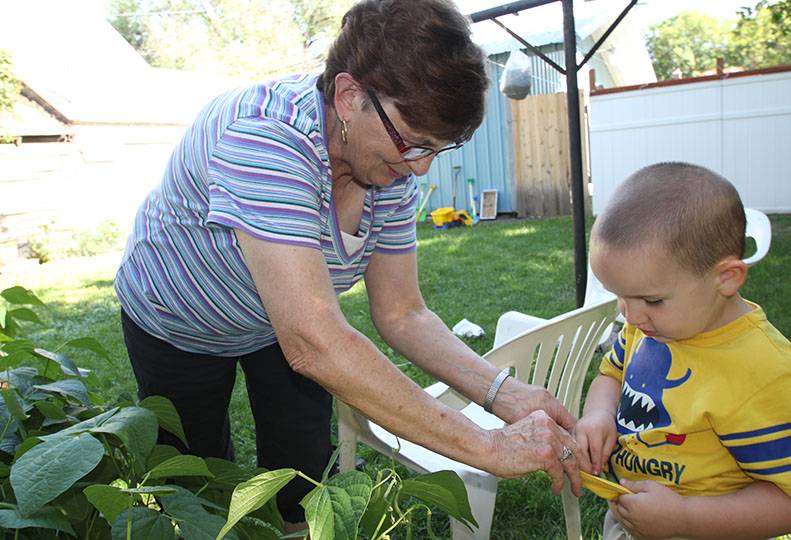 Spokane resident Peggy Clymore, 70, stays active with her grandson and hobbies such as backyard gardening, though she says having chronic obstructive pulmonary disease can slow her down.

While Clymore relies on medical inhalers and using oxygen at night, she says completing a recent pulmonary rehabilitation and education program at St. Luke's Rehabilitation Institute, in Spokane, gave her tips on regular exercise strategies and other ways to manage with the disease.

"I know how important regimented exercise is and how important to keep upper body strength," she says. "Even though I'm done with the rehabilitation, I'm still going to a fitness center two days a week."

She adds, "If I do take good care of myself, I could die of old age instead of COPD, which is my goal."

Clymore is one of more than 7 million women in the U.S. who have been diagnosed with the progressive lung disease, the nation's third leading cause of death. COPD occurs as airways in the lungs become broken down and narrowed over time, limiting airflow. The disease most commonly includes emphysema and chronic bronchitis as conditions.

In June, the American Lung Association issued a report, "Taking Her Breath Away: The Rise of COPD in Women," that says females are 37 percent more likely to have COPD than men in the U.S. The report also says COPD deaths among women have more than quadrupled since 1980, and since 2000, the disease has claimed the lives of more women than men.

Exposure to tobacco smoke is the leading cause of COPD, although outdoor pollutants, chemical fumes, and dust are thought to be causes as well. Common symptoms are shortness of breath, coughing and spitting up phlegm, wheezing with activity or even at rest, and fatigue.

The report says one possible reason for the disease's rise among females is that women are more biologically susceptible to lung irritants such as from smoking because of smaller lung size. Better recognition also may play a role in diagnosing what previously was considered a man's disease.

"Another reason is how much women were targeted by the tobacco industry in terms of their marketing," decades ago, says Cheryl McDonald, a Spokane-based American Lung Association health manager.

McDonald says that in Washington state, nearly 124,000 women currently have COPD, which is 36,000 more women than men in the state who have the disease.

She adds, "COPD disproportionally affects women. Women also are more vulnerable before the age of 65 than men, and we're not sure why that is."

The National Institutes of Health says that while uncommon, some people who have asthma can develop COPD. Asthma is a chronic lung disease that inflames and narrows the airways.

Clymore, who was diagnosed about five years ago, stopped smoking more than 30 years ago. She says as a child, she had frequent bronchitis and other health issues that likely weakened her bronchial tubes. Later, she says she was exposed regularly to workplace chemicals at a dry-cleaning facility.

Although COPD doesn't have a cure, patients can relieve symptoms with pulmonary rehabilitation and medications.

Dr. Samuel Joseph, a pulmonologist with Spokane Respiratory Consultants, a private practice here, says COPD patients most commonly are people who smoke or who previously smoked. If patients still smoke, physicians tell them they need to stop, he says.

"Women seem to be more susceptible to the harmful effects of tobacco than men," he says. "One thought is it's because the size of their lungs are smaller, and they're inhaling the same amount of smoke as men into smaller physically-sized lungs."

The higher instance of women having COPD in recent decades is likely tied in part to greater recognition of COPD among women, Joseph says. Women also started smoking in greater numbers as a trend in history after the general population of men, he says, adding that in the past decade, a larger number of young females have started smoking.

"From the point of starting smoking, it takes quite a few more years for COPD to manifest," he says.

At the same time, Joseph says some medical studies indicate physicians are more likely to diagnose men with COPD than women, perhaps in part due to gender-related differences in COPD symptoms. Females with the disease are more likely to have more severe shortness of breath, anxiety, and sometimes depression that may be misdiagnosed as anxiety/depression, he says.

Joseph says people experiencing COPD-type symptoms should see a physician for a pulmonary function test, and if diagnosed with COPD, discuss medical treatments as early as possible. He says people don't always have to be on oxygen at earlier stages, though they do as the disease becomes advanced.

"We've seen women in the age range of 23 to 87," Jibby says. "We are seeing women younger and younger being diagnosed with COPD."

A few of the patients have other pulmonary conditions such as cystic fibrosis and pulmonary hypertension, but about 80 percent have COPD as a diagnosis, Jibby says.

The program, which requires a physician's referral, typically has nearly 100 patients a year.

Jibby says patients in pulmonary rehabilitation come to the facility, at 711 S. Cowley, three days a week for up to 24 one-hour sessions. The patients do some cardio strength and endurance exercises, and learn such strategies as how to manage with shortness of breath, reduce stress, and lessen infection risks.

"I think people are becoming more aware of the symptoms of COPD and going to the doctor and asking for diagnostic testing," Jibby says. "If they do find out at an earlier stage, they can seek earlier treatment that can improve quality of life and decrease the number of hospital visits."

She adds, "We talk in the program about the importance of smoking cessation. Oftentimes, we've seen women referred to our program who didn't have a smoking history themselves but did have a history of being exposed to second-hand smoke."

McDonald, of the American Lung Association, contends that women are more likely to ignore warning signs and put off seeking diagnosis.

"One of the other things the report found is that women in general tend to be the caregivers for everyone but ourselves and may not be aware of symptoms," she says. "We lots of times pass it off by saying, 'It's the weather, or it's my asthma.'"

Clymore says that since she sought the help of a pulmonologist in May, followed by completing the pulmonary rehabilitation program, she's noticed fewer physical setbacks from the lung disease.

Just prior to seeking the help, she describes having longer and stronger episodes of what are called exacerbations, which for her involved an uncontrollable, deep cough and an extremely tired feeling.

Given the opportunity, Clymore says she would encourage other women who suspect they have COPD to get immediate medical attention.

"I'd say, 'Don't think you're superwoman and don't put things off as far as seeing a pulmonologist or a primary car physician, so you have a chance to live.'"