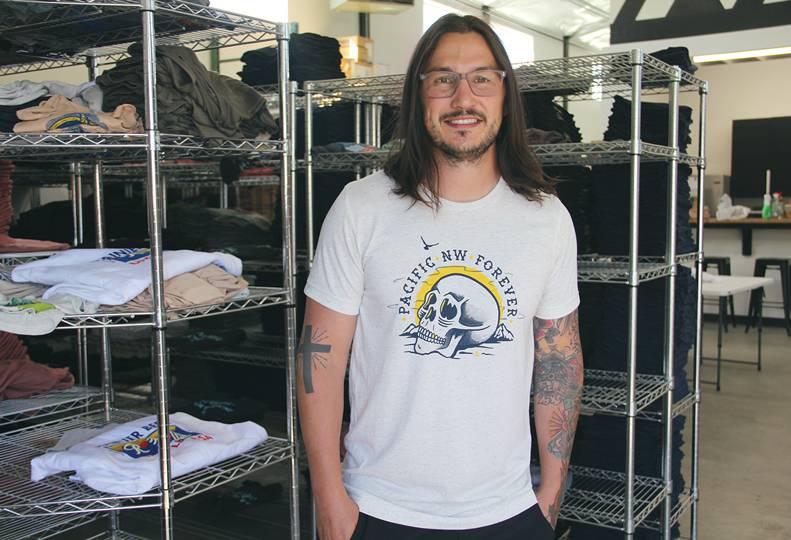 Combining those interests with his love for the Pacific Northwest led Barbour to create The Great PNW, a Spokane-based apparel company that now grosses over $1 million in annual sales.

Barbour, 34, grew up in the Hillyard neighborhood and in Mead, where he attended Mount Spokane High School. He later went to Spokane Falls Community College to earn his associate degree in graphic design. Throughout those years, his grandmother infused in him a love for art, Barbour says.

“She always had me and my brothers doing fine art and going to the Spokane Arts School … taking summer classes,” Barbour says. “She had an art studio in her house. Even throughout college, every Wednesday, we’d have lunch and we’d do some type of fine art in her studio.”

Barbour also was immersed in Spokane’s rich outdoor sports culture and says he soaked up the marketing of apparel brands that cater to enthusiasts of snowboarding and skateboarding.

After a brief stint at the Inlander newspaper, Barbour joined Spokane marketing company Seven2 as a motion graphics designer. Simultaneously, he was designing skateboards and apparel for free for friends who owned skate shops.

Barbour says his love for the Pacific Northwest extends throughout the region, but it was difficult to find clothing that celebrated the Northwest stylishly.

“If you wanted a shirt that said ‘Northwest’ or ‘PNW,’ the only way you were going to get that would be to go through the airport or be in a little touristy town on the Oregon coast, and even then, it would be cheesy,” Barbour says. “I knew if I felt this way, other people probably felt this way.”

He used his video-design skills to create a Kickstarter crowdfunding campaign in 2012 to launch The Great PNW. Within two days, the campaign received about $8,000.

While he continued to work at Seven2, Barbour launched The Great PNW from a small building in the backyard of his South Hill home in 2013. Although some local retailers carry the brand, The Great PNW itself has never had a brick-and-mortar retail store, instead selling products online.

The brand quickly took off and has been growing steadily in the following years. Last October, the company moved into an 8,000-square-foot office and warehouse space it built at 519 N. Sycamore. The building also houses Bison Printing LLC, which The Great PNW frequently uses for screen printing.

Barbour says that throughout the company’s history, he has focused on hiring friends.

“That has worked in some instances, and it’s also not worked. I’ve straight up had to fire one of my good buddies,” he says.

But hiring friends also means that Barbour feels loyal to his employees. He says that loyalty pushes him to continue the success of The Great PNW.

“Having a consumer (enjoy) a product is the end result of having a good team, where people are thriving in their talents and their skills and they are challenged.”

Grayson Ervin, president of Bison Printing, says that while The Great PNW now has grown, Barbour isn’t in danger of becoming a figurehead.

“There are a lot of people around him, but so much—from the designs to day-to-day operations to marketing—all comes back to him,” Ervin says. “For a long time, every single design that was put out by The Great PNW was his artwork only.”

Barbour says he doesn’t have an overarching plan for The Great PNW, preferring to take each day as it comes.

“The big thing that fuels me is that I know that I’m living and doing, right now, at this moment, what I’m supposed to be doing at this point in my life,” he says.